Belly dance is for men too, says Arun Bhardwaj

When I told my parents about my interest all hell broke loose. 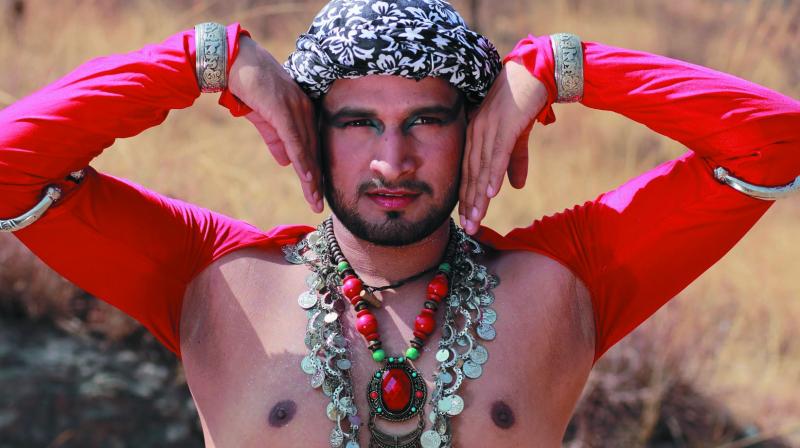 Belly dance, also called Arabic dance or Raqs sharqi, literally means oriental dancing. It is an Arabic expressive dance which originated in Egypt and  emphasises on the complex movements of the torso.

If we dig into the history of certain dances, we will realise that traditionally there were some dances that were meant for women and some that were only meant for men. For centuries the rules were untouched and no one thought or even tried to ruffle the feathers which were fitted so well in the cultural cap of each dance form.

Belly dance, also called Arabic dance or Raqs sharqi, literally means oriental dancing. It is an Arabic expressive dance which originated in Egypt and emphasises on the complex movements of the torso. It has evolved to take many different forms depending on the country and region, both in costume and dance style. In India Arun has given it a very tribal feel making it more earthy and also giving it a very traditional Indian touch.

Arun Bhardwaj was born in Pathankot district in Punjab, a land where being a male child is a privilege for sure. But when a male child chooses a profession which is mostly practised by females the privilege can get a bit hampered. He started his career in Belly dancing at the age of 16 years, learning it professionally and now has been practising it for the last eight years.

He learnt the skills of Belly dance from the Banjara School of dance and also attended many workshops done by acclaimed artists. He is India’s one and only male Belly dancer who is leading with this kind of dance style. He teaches American tribal style, improvisational techniques and other styles of Belly dancing as well like Egyptian classical, dynamic drum solo’s, tribal fusion, fluid tribal style besides jazz, modern ballet and Odissi.

I spoke to this young artist who only follows his dream and what I heard from him was a story which was very heart touching and indeed very heart warming. Excerpts:

You come from a Punjabi family, what was the reaction of your family when you showed interest to learn Belly dance, an art mostly meant for women?

When I told my parents about my interest all hell broke loose.

My father and my mother both were in total shock, for days they did not talk to me, a Punjabi boy wanting to learn Belly dance was

something beyond their imagination.

What was the perception of your people toward you?

Society is the main obstacle for a male to go ahead with his passion when it comes to Belly dance. People feel it is a cabaret form and has to be done only by women and not men.

How did your family and friends finally come around?

When I was learning no one even looked at me, it was as if I was committing a major sin. When I started teaching Belly dance nobody supported me in the beginning but after a few years my parents, friends and colleagues along with society started supporting me in this field. Now my parents are fine with it.

How did you convince and break the mindsets of your own people?

I kept telling them that in India, if classical dance is considered as pure dance form no matter if it is done by male or female then why the society feels bad about a male doing Belly dance in spite of knowing that it is a cultural dance form of Middle East. My repeated saying somewhere shook their minds a bit and turned it in my favour.

What was the major hindrance you faced in the long convincing game?

It was regards to the costume for sure, sometimes it is very bad for a person to feel about his/her own kid doing Belly dance because the costume is a bit revealing. But the fact remains that it is Belly dance and it is related with muscle movement, basically stomach so there has to be a costume that shows Belly portion of a person who is dancing.

In Bollywood Belly dance is done with item songs considering it will make the song popular or increase the TRP of a daily soap. What’s your take on that?

In many movies, various actresses have done Belly dance just wearing Belly dance attire. I am sorry to say but it was not actual Belly dance, it is just the way it has been choreographed by various choreographers.

So what Kartina Kaif did in the super hit song Sheela Ki Jawani was not belly dance you mean?

No, it was not pure Belly dance, she only made a fairly okay attempt to do it. Belly dance takes many years to master on certain techniques and steps which a person can’t learn or teach in just few days because it needs lots of practice and affection towards that particular step or move.

Bollywood actresses and choreographers still have to learn more about Belly dance before they teach or learn so that they can exactly feel what Belly dance is all about and can acquire that in their own body to present it more gracefully to the audience.

Arun Bhardwaj being a male belly dancer has started his own company with the name Indian Tribal School which focuses on exact lessons of Belly dance. This school is in Pune and for the last few years he has got many students who are learning the pure and the authentic nuances of Belly dance and are enjoying performing it too at various places. The main motive of the school is to spread the right knowledge about belly dance and its community.

Boys like Arun are very few who fight their way up by only believing and following their heart, they who try and gather knowledge from all over the world and from various different artist and their tricks and trade over the years.

This talent that Arun has is what makes him the finest tribal fusion male belly dance artist in India. With this story I wish Arun more fire in his Belly so that he can take his love for belly dance deep into the hearts of many.

The writer  is a World Book Record holder, a well known ballroom dancer and a Bollywood choreographer who has been honoured with two National Excellence Awards and one National Achievement Award by the Govt of India. He can be contacted on sandipsoparrkar06@gmail.com