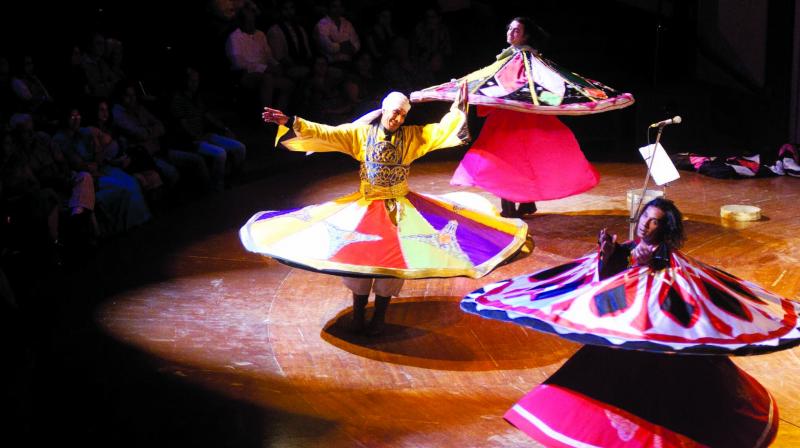 Though whirling dance is practised worldwide, in some cultures dervishes whirl clockwise in other to the right side.

Beginning the performance in a ceremonial fashion by listening to the music accompanied by the chanting of the singer, whirling dancers, also known as whirling dervishes, aim at reaching perfection and abolishing earthly desires through meditation. Much like the same, The Egyptian Mawlawiyah resembles the rotation of the different planets in an anti-clockwise fashion aiming to be in unity with the universe. Coming to the city for their mesmerising performance at the three-day long Sufi music festival, Sama’a: The Mystic Ecstasy at NCPA, eight dervishes from the team are all set to transport the Sufi music and dance lovers to the world of love that rises with the name of Rumi – the poet. “The use of music and whirl aims at stimulating the individual stamina towards the existence and liberation from nihilism by being in harmony with the elements of the universe and all its dispersed meanings,” says Amer El Tony, the founder of the group, musician and the scholar of Egyptian culture.

Established in 1994, The Egyptian Mawlawiyah team is determined to preserve the Egyptian heritage and its cultural identity through presenting their musical work on international platforms. Practiced as an essential annual ritual, the whirling aims to end the conflict between good and evil. “The philosophy behind the Egyptian Mawlawiyah is to reflect and meditate through whirling and create a state of peace and tranquillity both visually and audibly,” explains the founder while assuring that the performance takes one on a journey in spiritual music in which the spirit seeks to reach perfection.

Though whirling dance is practised worldwide, in some cultures dervishes whirl clockwise in other to the right side. However, Amer declares it a major mistake as the natural disposition in the universe is anti-clockwise to attract the cosmic energies in the universe. “We practice this type of dancing or whirling from a Sufi perspective and we don’t practice any other type of dancing as we aim at the spiritual aspect only,” avers the musician while adding that anyone can learn to whirl with a simple practice regardless of their age.

Unlike popular whiling dancers who majorly use white costume with a brown or black Sufiana hat, Mawlawiyah chooses to distinguish with their colourful embroidered garb. According to Amar, the colours in consume have a great role to play on the visual side as they use white in the beginning representing the unity of all the colours followed by other colours of the spectrum to add joy and happiness to the hearts of the audience. “The colourful costumes of the dancers are distinctive to the Egyptian heritage and to help preserve it,” reveals the performer.  Apart from their anti-clockwise dance and the extravagant costume, these dervishes have a supreme use of flute in their performance. The melancholy of its sound resembles the human being and its origin. “The sound of the flute has a special connotation, it has a bonding and uniting force that keeps the dancers in harmony,” says Amer.

Through long and strenuous exercise for long hours, the body of these dervishes is trained to be in harmony with the mind. Ask about their effortless long hour whiling, the singer owes it to a mechanism that enables the dancer to overshadow the whirling and reach the enlightenment through meditation, which he also suggests as the way of meditation for the audiences. “It is a mechanism and the meditation that the dancers practice. Through this performance, the audience is set on a journey to enjoy poems and music and improvisations that have an emotional impact that elevates their spirituality,” concludes the scholar.