In an ongoing exhibition, Arzan Khambatta’s sculptures depict how walls unite as well as divide. 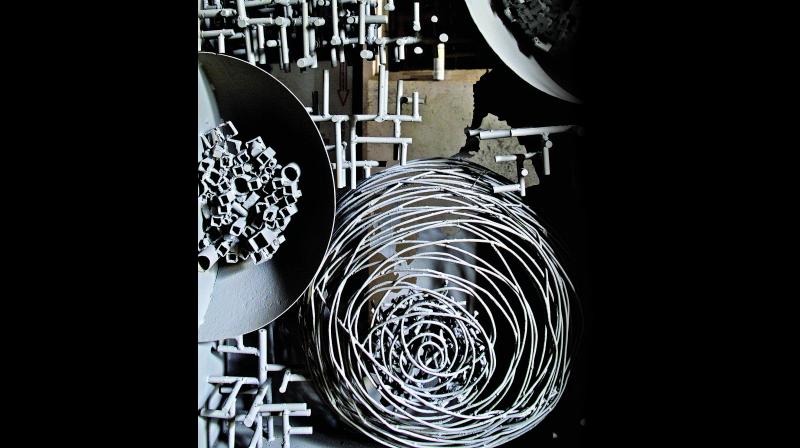 The sculptures on display have a unique harmony, where you can see geometric patterns set next to botanical designs.

When renowned sculptor Arzan Khambatta created a few distinct pieces by hammering, molding and welding metals, he still wasn’t sure how to present them. “I was making all these twists and turns with metal, I made a world map; there are chains, wooden pieces — it is all these small things but I didn’t know how to present them,” says the artist who then came up with the idea of having bare walls and showcasing how they hold decades of wear and tear and the energy emitted by the people living surrounded by these walls.

“You take a wall from an existing house and when you wash away the brick and mortar, what you’ll be left with will be the skeleton of the wall. So these are the skeletons of the wall — they have been hearing people talk within them, have things nailed onto them, broken, changed, renovated — it’s like, to me, they become living organisms and a sort of direct reflection to the kind of public that was there within them,” says Arzan who is trying to depict the phases people undergo through his exhibition titled Walls.

In today’s time, the word 'wall' has a greater meaning, and instead of a building block you make a house with, it quickly turns into a separation tool, and though this exhibition, Arzan is trying to draw attention to that aspect as well.  Talking about the same, Arzan says, “I wanted to show how this world and everybody existing in it is currently making walls around to separate, segregate and divide us into smaller parts, politically or culturally.” Even spaces like art galleries have an elitist attitude and hence not everyone is comfortable visiting the space, “thus creating a psychological wall”. At the exhibition, the walls will be set in such a way that it would give the audience a different feeling. “I want to do a walkthrough with walls, so that people can experience and sort of feel claustrophobic so that they try to avoid making these walls around themselves,” explains Arzan.

The sculptures on display have a unique harmony, where you can see geometric patterns set next to botanical designs. Explaining the reason behind the mish-mash of two worlds Arzan says, “The composition is about putting things together and making it look aesthetically good. Beside the theme of walls, my focus also was on to make them aesthetically pop up. If someone is exhibiting it somewhere, it doesn’t have to be something they have to explain but also a piece that’s aesthetic by itself.”

Being made of steel, there is no colour involved in the sculptures, but the artist’s play with light and shadow adds a different dimension to the pieces. “To me, colour is meant to be more for paintings and not for sculpture.  I like monotonous sculptures, so when the light falls on it, the shadows and everything plays an important role and brings out the form and sculpture more,” says Arzan who is an architect by profession.

Taking inspiration from his travels and itty bitty things he has collected on the way, Arzan also uses the wall theme as a way of displaying memories. “In my studio, I have a lot of interesting things lying around, and all these things have been collected from somewhere. It could be just a stone I picked up in Bhutan or a dried leaf I picked up somewhere else, all these things matter a lot to me and it brings out a lot of memories. There are two walls where I have done things like that, further exemplifies that walls store your memories,” he says in conclusion.

The exhibition is ongoing at Art & Soul Gallery in Worli, till January 31