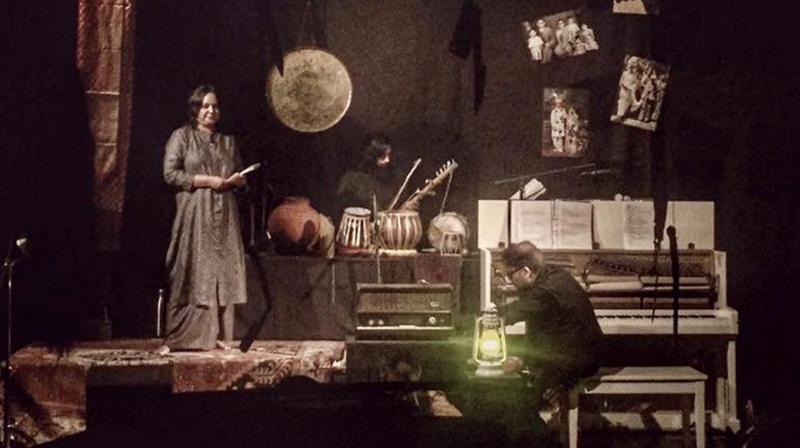 Art is all about transcending time and short story writer Saadat Hasan Manto continues to speak through his riveting writings on the 1947 Partition bloodshed.

With Eagle Claw’s dastangoi, art of oral storytelling in Urdu, ‘Broadcast’ put up a dramatisation of 28 short tales, penned by the wordsmith that resonate with seemingly disparate acts of communal violence taking place across the country these days.

“The 28 short stories of Manto titled ‘Afsanche’ are a chilly reminder of the times we live in. From terrorism to religious fundamentalism, our country is still struggling with various strands of violence,”

‘Broadcast’ director, Udayan Chakravarty said. He said the storytelling urges to inspire caution and conversations against the rising tide of intolerance.

“Those who raise uncomfortable questions are often suppressed by successive governments. In a way, nothing has changed from 1947. We still live in times of terror. The recent Ballabgarh incident and Amarnath terror attack are cases in point.”

He said the production was an effort to bring out an interesting interplay of Manto’s Urdu verses with light, sound and music. ‘Broadcast’ recreated the bygone, bloodied era of the Partition through its realistic set design — a broken radio, scattered family portraits, locked suitcases, a newly-wed’s saree, toys, military uniform, sharp-edged weapons, holy books.

Fauzia Dastango, who performed last evening, said she identified with Manto’s work. “I have always felt a strong affinity towards Manto’s work, especially his short stories. They are sharp and make one introspect on the kind of society we live in,” she said.

Credited as India’s first female dastango artiste, Fauzia added the fusion was an uphill task to achieve, but she was ably supported by Stefan Kaye and Makrand Sanon’s soundscape.

“Initially, we had trouble weaving everything together, but we were able to present a composite act.” One of the audience members, retired wing commander Bhambri recalled how he, along with his family, was brought from Lahore to Attari during Partition.

“We were all squeezed into a train like animals. There was no food or water. The water tanks at stations were filled with poison. I felt a deep connect with the play as I was present at that time and day. Such retelling makes us question whether we have developed as a society or are we still there in the past,” he said. Saadat Hasan Manto is considered among the greatest writers of short stories in South Asian history.