How can Bharatanatyam live and breathe in a place where the cultural ecology is so different? 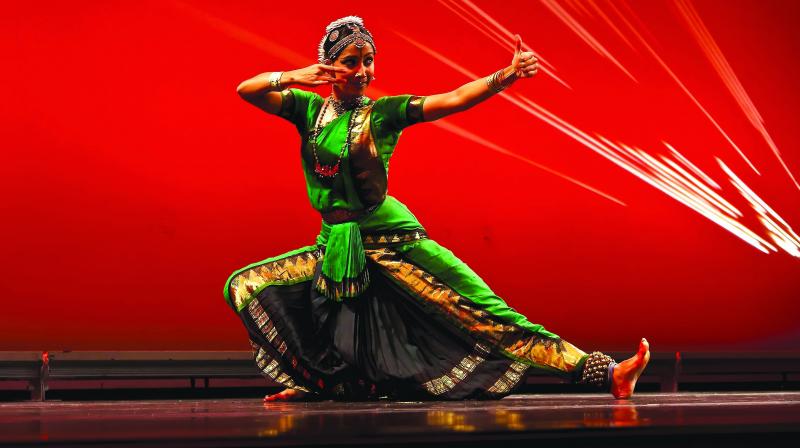 At a time when dancers of what is termed “classical”, comprising traditions inherited from a hoary past, are being confronted by the “modernists”, to justify, defend and sometimes almost apologise for practising a danceform like Bharatanatyam is a reality. Amidst it all, one wonders how dancers of the tradition living in foreign cities as little known as Bologne or Torino in Italy, are able to preserve the Indian identity of the dance so convincingly in their art.

Overly stylised art forms with established norms of concert presentation could be considered out of fashion, when artistes are constantly being nudged to get out of comfort zones. How can art, emerging out of what was handed down from an ancient past, communicate with a totally different aesthetic in the contemporary world? And how can Bharatanatyam live and breathe in a place where the cultural ecology is so different and where one does not see the sights nor hear the sounds or feel the scents of the soil of the region from where this dance form has evolved?

Dancers living in foreign environments often claim that re-contextualising art makes it richer, not poorer, for it acquires a hybrid vigour which revitalises the art. The fact is that for one who engages deeply with the core of the art form and wants to share it with others, the inner conviction makes all questions of relevance redundant and irrelevant. If dance is a yoga with the root word yug which is to connect, Bharatanatyam or any other dance connects the within with the without, the individual with the other, the past with the future. Late veteran choreographer Chandralekha talked of the humanising influence of the dance in a world that is brutalised.

In Chennai, watching some dancers who are now acknowledged for the excellence of their Bharatanatyam, I wondered how being born and brought up in a western country had not, in any manner, whittled down the essential Indian spirit in their dance. In the case of Mythili Prakash who is based in California, United States, being the daughter of a Bharatanatyam artiste, Viji Prakash, who runs a flourishing dance company involving several dancers, the dance has come as part of her upbringing and home surroundings. From nattuvangam to singing to dancing, Mythili has surprised audiences in India with the integrated grounding she has in Bharatanatyam. Watching her Bharatanatyam recitals for the Music Academy and other sabhas of Chennai, with her brother Prakash accompanying her often as the Carnatic singer, one wonders as to how education in the schools and universities of America with the value systems of a different culture has made no inroads into the authenticity of their Carnatic traditions — the only giveaway of
the non-Indian element is in their totally American English speech.

Erupting onto the Krishna Gana Sabha stage like a flash of lightning, to the “Shiva Shakti’’ tones of a Subramania Bharatiyar composition set to a raga in the same name (Shivashakti), right up to the finale with the Swati Tirunal Tillana in Dhanashree, Mythili Prakash held the audience enthralled. The Varnam in Ragamalika expressing nayika Goda’s deep longing to become one with Krishna, based on lyrics of G. Vijayaraghavan with music composed by G. Hariprasad, “Aat kollavendum Ayyane Azhi Kaiyyane” witnessed a dancer totally immersed in the interpretation. Ardently calling out to Krishna, the intensity of Andal’s desire to be merged with the Lord finds expression in metaphors — wishing she could be the coiled snake bed on which he reclines, or the cloth of the garments covering his body. Overjoyed that the garland meant for the Lord which she secretly put round her neck is now adorning his neck, she approaches Nature in her overweening desire, entreating the black clouds, Manmatha, with his sugarcane bow, the green parrot which keeps chanting the Lord’s name, achyuta, to be the messengers conveying her feelings to the Lord. Apart from the evocative abhinaya, one admired the excellent teermanam links, the nattuvangam by Kesi Isola along with the translation into geometric perfection of movement by the dancer — and what is more, the beautiful dance lines going with footwork fully articulating the rhythmic utterances. Along with the nattuvangam one appreciated the young team of vocalist Sushma Somashekhara, Shivaprasad with his mellow mridangam sounds, along with the experienced artist Ishwar Ramakrishnan on violin providing fine melodic support.

The padam, “Unnai Doodanuppinen”, projects the nayika whose suspicions are roused, on finding the sakhi, lovingly sent by her on an errand to her lover, returning in a state of complete dishabille with unmistakable signs on her person of indulgence with a man. Berating her own foolishness in what the nayika describes as feeding milk to a snake, the sakhi’s tousled hair brings back memories of her own efforts in carefully ministering to her needs while doing her coiffure, before sending her off to her beloved. In a final act of pent up anger, she orders the sakhi out. Mythili’s mukhabhinaya sensitively caught the gradual build-up of anger against betrayed loyalty, to the final act of dismissing her.

Loosening the emotional tension caused by a friend’s betrayal, came the enjoyable Ranganeswar composition “Rusali Radha, rusala Krishna, rusale sare Gokul” wherein Radha’s anger finds Krishna responding in the same mood and the whole of Gokul seems to echo similar emotions. When tempers melt with Radha and Krishna back on their old footing, Nature also responds. And in this swara/taanam joy comes the Swati Tirunal Tillana. Altogether a most enjoyable recital.

Dominique Delorme, a French dancer of Bharatanatyam and later Bharatanritta based in France, during the Krishna Gana Sabha’s 39th Natyakala Conference Nirikshana, was chosen as the dancer to represent the Padma Subramanyam Bani (gharana) of dance. No mean achievement this! Dominique started learning Bharatanatyam under a French teacher named Malini as a youngster living in his country. He later became the prized disciple of Guru Muttuswamy Pillai in India for a few years. Seeing in this student a rare quality, the Guru choreographed a special varnam on Nataraja, the dancing Shiva, for he felt that no other person would bring out the postures to such perfection as Dominique. I remember his performance in the 1980s in Delhi under the Sahitya Kala Parishad with the bewitched audience feeling that they had witnessed one of the finest expressions of Bharatanatyam. When Padma Subrahmanyam created her fifteen episodes for Doordarshan based on the Natya Shastra, Dominique was one of the many young dancers interacting with her, featured in the episodes. Soon Dominique became a regular disciple of Padma, going deep into the theories of Bharata as dilated upon in the text. Today, years later, his body still trim and firm, he is one of the best exponents of the karanas of the Natya Shastra as visualised by Padma Subrahmanyam. And watching him present Bharatanritta was an experience. Dominique is one dancer who never stops to wonder at what he calls the “universality” of the Natya Shastra. “I can never thank my guru enough for opening my eyes to the vastness of this text. This makes you a world dancer. I have choreographed contemporary items based on the steps, the karanas and the angaharas of the Natya Shastra. “And, indeed, Dominique is as much at ease dancing to the Carnatic music of Padma’s repertoire, as to the music of the Harp of Rudiger Opermann, as to the accordion of Servais Haanen, not to speak of the shamanic drums and cymbals of music from Mongolia. When you have mastered Bharata’s text, staying so far away in France and still keeping Padma Subrahmanyam’s dances unsullied is not surprising. It comes naturally.