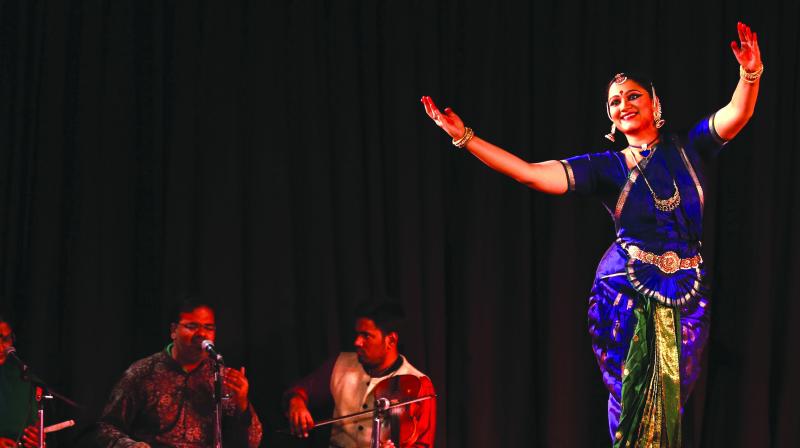 The Delhi audience recently were privy to an evening of celebrating love and solidarity at the Double Bill Dance Concert, organised by the India International Centre, where Bharatanatyam dancer, Sharanya Chandran celebrated various shades of love with a series of enchanting dance performances.

Titled ‘Love in the time of Kama’, Chandran presents a unique motif of Ardhanareeshwara where Shiva and Shakti, reside side by side, complementing their energies and capabilities.

Talking about her performance, the disciple and daughter of Padma Shri Geeta Chandran, says, "I look at it as not two opposites but two forces which came together and united; this is a concept of union and united souls. It is a different aspect and facets of two halves.”

Ardhanareeshwara is  a composition of poet Vidyapati of Mithila. In this composition, Vidyapati brings alive the balances between Yog and Bhog - the virile and beauteous- between creation and destruction; and while in the iconography, they exist as two distinct  parts, they merge eventually, creating an undivided reality that brigs alive all our philosophic challenges of today.

The presentation was followed by a Thanjavoor quartet Varnam in the ragam Kamboji set to Adi talam. The nayika (heroine) who is desperately in love with Shiva-Brihadeeshwara, concluded with the presentation of Katana Bhedana. The Kalidas of Maithili, Vidyapati, has written the Nindastuti where Shiva’s attributes are made fun of. Vidyapati uses Radha as the main character who is tormented by cupid’s arrows while she awaits for Krishna. Unable to bear her torment any longer, she blames cupid for mistaking her for Shiva and compares different aspects of her own beautiful self with similar aspects of Shiva, which she says are so very different from her.

The learning process and experience of dancing was very special for Sharanya, she shares, “My mother is completely different  as a guru. She is a friend and confidant as a mother and as a guru, she treats me no differently from any other student. It’s always been the case that I have been a part of group classes and got no special privileges from the beginning, so, I think it really helped me to get that seriousness in dancing.”

“It has been amazing as she goes very much beyond the grammar of dance, she is a musician, she loves poetry, architecture and so many other things that she knits together, some of our classes are just storytelling, some classes are just how you knit music and dance together, and others are just watching everybody else dancing, so it’s a very holistic learning process under her.”

Sharanya loves multitasking, besides being a trained Bharatanatyam dancer, she is also a trained economist and a development policy professional. “Today’s DNA is that something which is inevitable. I don’t see these two things mutually exclusive, one gives me the energy to do  the other better and I have always sort of loved dance, not only Bharatnatyam but also all kind of dances and listening to music. However, I never thought I would be serious about (dancing) it as I am today,” she concludes.