Boob art is taking the art world by storm

The female breast has always fascinated artists since time immemorial; and now it is taking a new form. 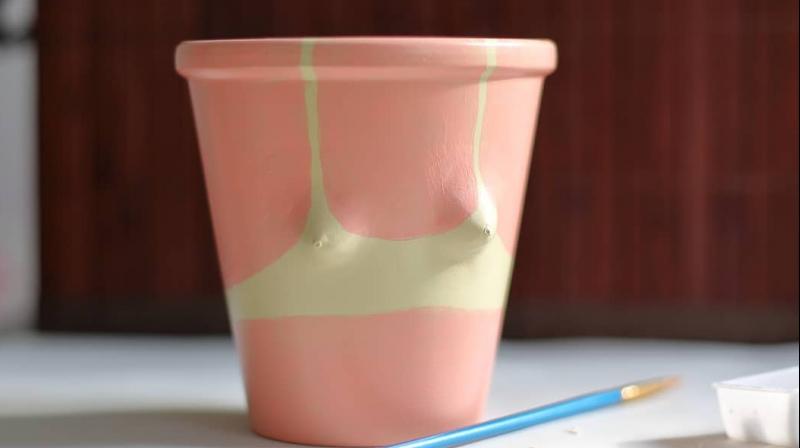 Boob art is purchased by women as a form of self-empowerment, pride and liberation.(Photo: Instagram)

An unconventional kind of art is slowly proliferating in the artistic circles. Boob art. They are found in paintings, home décor, jewellery and clothes. Boob paraphernalia can also be found in all major US stores such as Urban Outfitters.

But most of these stores stick to making perfectly symmetrical, pale white breasts with pink colour nipples. The artists completely discount the fact that breasts come in all shapes, sizes and colours and are almost never symmetrical.

The breast has been a favourite subject for artists from 28,000 BCE. Greek and Roman sculptures from the Classical Era have depicted the topless female form perfectly. In the book Naked Truths: Women, Sexuality and Gender in Classical Art and Archaeology, Beth Cohen has compared the number of topless female form to topless male form. The number of female topless art was much greater than the male ones despite female nudity being a taboo even in the 5th century. Manet’s Olympia is another iconic painting featuring the bare-breasted woman.

Boob art has since then evolved into a niche topic in 2019. Canadian writer Pamela Dungaro says that boob art started from the work of Group Partner's Isaac Nichols. Boob art isn’t supposed to be sexy, but it is surely meant to be sexual, daring and borderline scandalising, reported Vice.

Another movement that comes to mind when talking about boob art is the 2012 Free the Nipple Campaign. The campaign advocated for women’s rights of being accepted topless in public like men. The Guerrilla Girls, a feminist activist movement, once aptly said, “why do women have to be naked to get into the Met Museum, or clothed to walk down the street outside of it?”

Boob art is purchased by women as a form of self-empowerment, pride and liberation. By wearing it in public or adorning your house with it, it makes breasts public, defined and visible, rather than something that private and objectified.

This form of art was an outgrowth of several other movements like Women’s March Madness, Free the Nipple campaign, the Pussyhat and the uprising of US women’s reproductive rights. Along with being visually pleasing, boob art sends out a signal about women’s liberation as well.

There are questions if boob art is a manifestation of a form of feminism or a demise of it. Artists that make this art aren’t interested in making it sexy or alluring, but more intent on it sending out a message. Thus, this mini-revolution is female sexual liberation finally gaining the traction it deserves.