Keeping tradition and innovation together

Kumudini Lakhia made clear that she viewed the Benares gharana, which included Janaki Prasad from Bikaner and Sita Devi’s family. 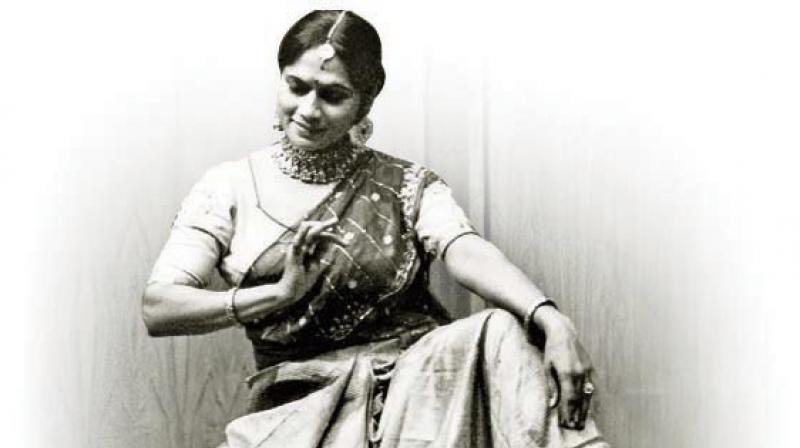 It is impossible to think of anyone better qualified than Kumudini Lakhia to present an overview of Kathak in our times as the second annual Kelucharan Mohapatra Memorial Lecture in Delhi recently. Her personal journey to becoming a pioneering Kathak choreographer as well as root guru to internationally acclaimed artists such as Aditi Mangaldas and Daksha began with performing “oriental dance” as part of Ram Gopal’s European tours.

One can easily imagine the excitement of artist and audience in 1948 in the presentation of a smorgasbord of Manipuri, Kathak and Bharatanatyam. I do wonder why, 68 years later, the central gala of the upcoming Festival of India in the UK, I heard will be a similar classical puree apparently  based on the presumption that UK audiences are not yet ready for more sophisticated presentations.

In any case, as many reading this already know, Europe-returned Kumudini ignored the nay-sayers to study first from various gurus of the Jaipur gharana then  with Lucknow Pandit Shambu Maharaj on a two year scholarship and then another year learning Jaipur Gharana under Pandit Sundar Prasad.

With her solid foundations and urge to train herself to go beyond the lilas of Radha and Krishna, Kumiben is now situated at the top of the dance Himalayas to reflect on each and every aspect of Kathak then, now and the needs for a healthy tomorrow for the dance that loves her as much as it is loved by her.

She initiated her overview of Kathak in today’s ethos with a brief look of how various Kathak gharanas had been established. The Kathak sub-varna Jatis were primarily located around Rajasthan and Uttar Pradesh, supported mainly through patronage by various rajas and maharajas. The grouping of the Kathak dancers of Jodhpur, Bikaner, Chamba Valley and other smaller places under the umbrella name of Jaipur gharana was the brainchild of a consortium of maharajs.

Similarly, the Kathaks of what is now Uttar Pradesh were drawn to the Lucknow courts which patronised performances each evening. The legendary Maharaj families hailed from places like Handia Tehsil in Allahabad and Haria village and I look forward to learning more about other places of origin of traditional Kathaks of yesteryear from the extensive research Shovana Narayan is traveling to discover.

Kumudini Lakhia made clear that she viewed the Benares gharana, which included Janaki Prasad from Bikaner and Sita Devi’s family, as basically Lucknow style. Irrespective, she also doubted that any of the Benares gurus would accept the acrobatic dance performed currently by Vishal Krishna, Sitara Devi’s grandson.

With late Chitresh Das’ claim to having created a California gharana, Kumiben suggested that we should now have a Delhi gharana reflecting the fertile borrowing amongst dancers and gurus.

She is particularly known for her multi-person choreographies. Some of her most famous choreographies include Dhabkar (Pulse), Yugal (The Duet), and Atah Kim (Where Now?), which she performed at the annual Kathak Mahotsav in Delhi in 1980. She was also a choreographer in the Hindi film, Umrao Jaan (1981), along with Gopi Krishna.

Kathak is popular in India and abroad, with even students who have completed Bharatanatyam arangetrams are coming to learn. Today there are many festival, many opportunities to learn complete with examinations, scholarships and ready employment as every school wants a dance teacher for staging their annual programs.

Despite this, or perhaps more accurately because of this, we are seeing more of skill than art. What is generally presented on stage is one big splash of what has been learned in classroom, minus care for costuming, the basics of aesthetics, and certainly a dearth of abhinaya.

The basic difficulty is in the teaching which she feels urgently needs revival in private classes and institutions. What is missing from a syllabus of tukras and tals is the fundamental body training needed which both fundamental and primary. First teachers must create the body awareness and adjustments needed for individual bodies of different proportions to straighten the spine and balance shoulders, arms, neck and legs rather than simply focus on the feet.

Where training was one to one it is now thirty to one. Every individual should be treated as an individual in order to create artists. Dancers are on stage without knowing where to look or even how to stand.

Another point of current training is that tala structures have been subdivided into many names that are still basically ektal or teental . She would like serious teachers to get together and devise a body training module with how many talas are taught coming later.

Turning to the subject of choreography, she appreciated that group dances are essential to accommodate large batches of students, but with no training for choreography in India as is commonly taught in all dance institutions abroad, what we do here are dance-dramas or word to word abhinaya, but not choreography.

As one of India’s most respected and even revered choreographers, Kumiben shared her path and discoveries along the way. She said “I was tired of years of getting drenched by water by Krishna and even repeating Shiv-Parvati compositions. I wanted to do abstract dance that did not lean on story. I wanted to find the pulse of Kathak, not it’s outside garb, and so I did abstract items and started training myself, (discovering) what to do with the space between two people at different distances. It is about space and time:  fast or slow changes the meaning and space is between not simply the arm moving.”

She looked at design books by Charles Correa among others and when B.V. Doshi responded to her question about why he made windows with the answer “To let in air”, she created windows in her dance to also let in the air.

When she began her experiments with space, time, energy and motion, the ABC’s of choreography that she self discovered as did the early modern dance pioneers in the West. “There is space around the dancer; there is a vacuum inside which must be filled with dignity. Today Kathak lacks dignity the way it is presented by only showing off skill. After 10 minutes you have seen everything, tukras and chakkars and there is nothing more”

She discovered that there are 23 Kathak schools in San Francisco alone. “Students take one class a week and arrive in India claiming 5 to 10 years experience. Their teachers have learned basic tatkaar and come shopping in India for tukras along with their sari shopping. We can’t stop that but must focus on children here who are serious.”

Speaking to an audience sprinkled heavily with leading dancers/gurus, Kumiben earnestly asked all to each take 10 students under their wing to individually advise and guide on everything from developing their abhinaya to avoiding garish bright costumes.

She started doing abstract choreography because of the limited themes available to her at the time but now feels that there are many subjects and diverse poetry available to more literate dancers and all “can do mood to mood with meaning without words. Kathak gives lot of liberty. Kathak travels outside your body — extended in space beyond the body. It is a living art form and change is the only constant.”

I loved her examples of little exercises for little children such as allowing a scrap of paper to fly away from a fan and asking the students to imagine a bird or flower and fill in the details of colour and type or simply to read a story and have the young dancers react. I had asked my guru once if I should practice any specific sira, greeva, hasta abhinaya techniques, check in the mirror, or whatever, he said “no, just feel” and I understood that going into the text and all the related context of time, place and relevance facilitates the internalisation that can’t be taught. Yet acting schools and Kathakali have definite techniques for abhinaya and certainly Kalanidhi Narayanan developed a new pedagogy. There is vast scope for guiding students to go beyond skill to fulfill the possibilities of communication through dance with or without text. Raza Foundation and Habitat Centre did the arts community a worthwhile favor in organizing this Kelucharan Mohapatra Memorial Lecture-II presentation by Kumudini Lakhia.

Sharon Lowen is a respected exponent of Odissi, Manipuri and Mayurbhanj and Seraikella Chau. She can be contacted at sharonlowen.workshop@gmail.com.