As the nation mourns the death of 49 CRPF jawans, city’s artistes too pay their tribute to the martyrs. 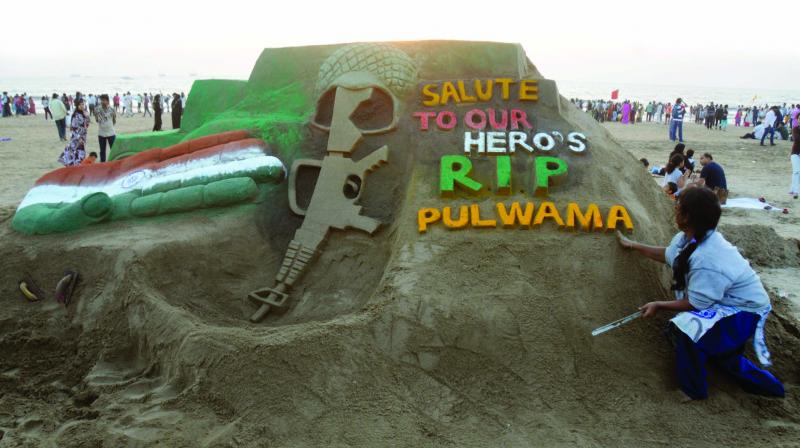 When a convoy of 78 buses, boarded with 2,500 CRPF personnel travelling from Jammu to Srinagar, came under attack on Thursday at around 3.15 pm at Ladhu Modi Lethpora, little did the nation know that 49 soldiers of the country would lose their lives, marking the massacre as one of the biggest militant attacks in the valley in the last two decades. Anger, tears and expectations from the government to avenge the latest provocation by terror groups in Pulwama have paved a way for many heated and heart-rending reactions by the countrymen. From politicians to film stars and sports personalities, tributes for the Pulwama martyrs continue to pour in from all the corners of the country.

In their unique gestures, artists from the city have also come together to express their deepest condolences to the families and loved ones of the bereaved.  Paying a tribute, sand artist Laxmi Gaud spent more than 10 hours at Juhu beach making a sand art displaying army base with a gun and the tricolour. She also paid her homage by scripting ‘Salute our hero’s RIP Pulwama’.

“I can’t do anything for our soldiers who died in this attack, but at least I can pay tribute to them through my art. I wish their souls rest in peace,” says Laxmi, who is deeply saddened by the attack. “I made this on behalf of my entire family,” she adds while her daughter lights a candle at the vigil. Ask her about the idea of making the base camp and the tricolour, she confesses that the idea was given by her son, “I know what happened at Pulwama, and I still wish the Army remains strong.”

Meanwhile, theatre director Dev Fauzdar along with his team is paying their reverence to the martyrs through an exasperating street play titled Aakrosh (Resentment). Dev, through his skit, plans to focus on the power of unity instead of fighting such acts of war. “We fight ugly war of religion, but the nation doesn’t have any religion and we are citizens of one nation,” asserts the director, adding that the Indians repeat the same mistake over and over again and there is a need to stop this once and for all. “It’s not only the government’s responsibility, we as individuals should also be disciplined to keep our own neighbourhood in harmony, rather than bombarding on social media,” he says. The 12-minute skit has these issues in the centre and will be performed at the posh corners of the city like Marine Lines, Bandstand Promenade and Versova. “We are doing 15 shows in total,” confirms the director. The team also staged a play a day after the attack and have deposited the collections earned to CRPF Wives Welfare Association. “It’s a very small thing but we are ready to do anything in our capabilities,” he says.

While these artists could understand the gravity of the massacre, the innocent minds are too not far behind as the students of Gurukul School of Art paid tribute with their paintings. With exceptional sensitivity, at least eight students ranging from the age of nine to 14 are displaying their anger and emotions through 40 different paintings and portraits of martyrs by depicting Mother India crying over the death of all the jawans. “They saw pictures on the television. We gave them print-outs, and then they drew them on placards,” says Prithviraj Kamble, the director of the school. The kids have kept their work open for public in Lal Bagh for the last two days. “They are very young to see the nation battling with such a big event, but they too understand it is a very sensitive and difficult time and that’s how they have used their imagination in their art,” adds the director.

In addition to the artists coming out to pay the homage, several schools, colleges and organisations have taken out candle marches in different areas of the city to pay their respect to the martyrs.