The scientists were able to analyse 70 per cent of the painting in 24 hours. 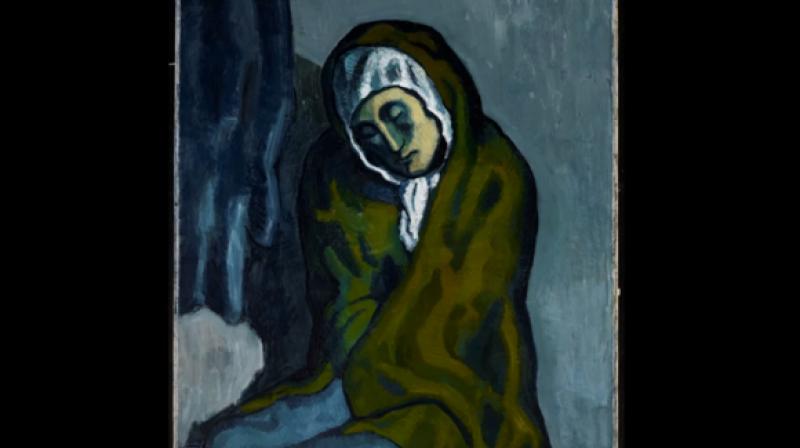 Scientists have uncovered details of a landscape hidden underneath the visible surface of Spanish artist Pablo Picasso’s painting that depicts a crouching and cloaked woman, painted in white, blues, greys and greens.

The 1902 oil painting “La Misereuse accroupie” (The Crouching Woman) is a major work from the Picasso’s Blue Period.

The painting is owned by the Art Gallery of Ontario (AGO) in Canada, and the knowledge of an underlying landscape was revealed long ago by X-ray radiography.

Researchers from the Northwestern University/Art Institute of Chicago Center for Scientific Studies in the Arts (NU-ACCESS) and the National Gallery of Art in the US used non-invasive portable imaging techniques to detail buried images in works by Picasso. “Picasso had no qualms about changing things during the painting process,” said Marc Walton, a research professor at Northwestern University in the US.

“Our international team — consisting of scientists, a curator and a conservator — has begun to tease apart the complexity of “La Misereuse accroupie” uncovering subtle changes made by Picasso as he worked toward his final vision,” said Walton.

Researchers found that Picasso painted over another painter’s work after rotating it 90 degrees to the right, using some of the landscape forms in his own final composition of “La Misereuse accroupie”. Picasso incorporated the lines of the cliff edges into the woman’s back, for example.

Picasso also made a major compositional change. The artist initially painted the woman with a right arm and hand holding a disk but then covered them with her cloak in the final work.

By closely observing “La Misereuse accroupie”, researchers observed distinct textures and contrasting underlying colour that peaked through the crack lines and did not match the visible composition.

X-ray radiography was the first non-invasive tool used to uncover hidden information in “La Misereuse accroupie”; it revealed a horizontal landscape by a different Barcelona painter, whose identity remains unknown, under the visible surface of Picasso’s painting.

John Delaney, senior imaging scientist at the National Gallery of Art, then studied the painting with infrared reflectance hyperspectral imaging, which records underlying images depending on their relative transparency of the paint layers.

He found an arm and a disk under the surface of the painting. Delaney’s imaging method provides improved visibility of earlier compositional painted elements.

For a more detailed understanding of the repositioned arm, scientists next investigated the painting using images generated by their X-ray fluorescence (XRF) scanner.

This system produces greyscale images showing the distribution of elements associated with various pigments of the painting.

The scientists were able to analyse 70 per cent of the painting in 24 hours.

Together with micro-samples extracted from strategic locations, the XRF results, along with further images generated by Delaney from the hyperspectral reflectance, reveal the steps of creation taken by Picasso.

“We now are able to develop a chronology within the painting structure to tell a story about the artist’s developing style and possible influences,” said Sandra Webster-Cook, AGO’s senior conservator of paintings.