Haku Shah was known for collaborating with rural artists. Here is an exhibition that pays tribute to the late artist who used Gandhi as his muse. 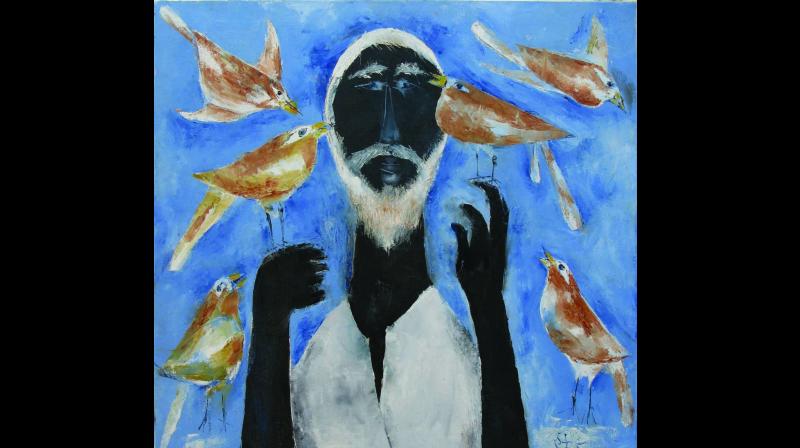 aku Shah recently passed away but his works shall live on forever.

In the case of art, it is believed that although the artist has passed away, the artworks, the style and the colour use lives on forever. Haku Shah recently passed away but his works shall live on forever.

In order to pay homage to the late artist, the Kiran Nadar Museum of Art recently organised an exhibition titled ‘Iss ghat antar baag bagiche’ which roughly translates to, ‘Within this earthen vessel is bowers and groves’. The exhibition displayed over 80 works which encompassed artworks ranging from oil on canvas, mixed media collages to colour pencil and ink drawings on postcards, terracotta sculptures, textile scrolls, books, journals and periodicals.

Speaking to the senior curator, Akansha Rastogi, she explains, “It was very important to highlight his contribution to the field of visual arts. It was (organised) to also highlight the fact that he was a collector who archived, studied different crafts and wrote a lot about them.”

Shah was renowned for his use of rural art techniques and collaborating with the rural artists as well. It could be fair to say that the late artist amalgamated the rural and urban art forms. The curator agrees as well as further adding, “He has collaborated with really amazing people from all across the globe. I think there is also a great element of interdisciplinarity there which came from the post-independent decade.”

One of the highlights of the show was how he used Gandhi as a muse yet the late artist painted the father of the nation in an intimate and personalised manner. She continues, “He plays around with the elements related to Gandhi, who is more in the spirit and ethos than someone who is divine. He treats him more humanly as a philosopher and a fellow artist.”  She believes that the artisanal aspect of Gandhi was crucial to Gandhi’s philosophy as it influenced Haku’s engagement with artisans as well.

The late artist was fond of 15th-century Bhakti and Sufi poetry. He was also fond of Kabir’s poetry to the extent that some of the captions of his paintings are from the poet’s dohas. “The works brought in a glimpse of medieval times and the idea of secular.”

That was speaking to the curator but now speaking to someone who was very close to him, his son Parthiv Shah, he says, “His approach to his art practise was what he believed in, he lived and practised it, and that would reflect in his works. It was because he had a Gandhian approach, he always like that.”

One of the pioneers of minimalism and simplicity, Parthiv believes that simplicity is misunderstood very often. “His works have a lot of layering because he used different practices like design, fine art, research. It’s not just ideas and expressions which have been conveyed simply on a canvas,” he observes.

In a time like today, where people are outspoken about issues pertaining to the environment or society, artists haven’t been afraid to take that feeling to the canvas. While Haku did the same, Parthiv believes he expressed the message in a different way. He adds, “Even if the issue was raised, it was done in a minimal and subtle manner. My father’s works have these things (issues) keep coming in a subtle way.”