Ironically, many Indian rulers had French-speaking officials in their kingdom. 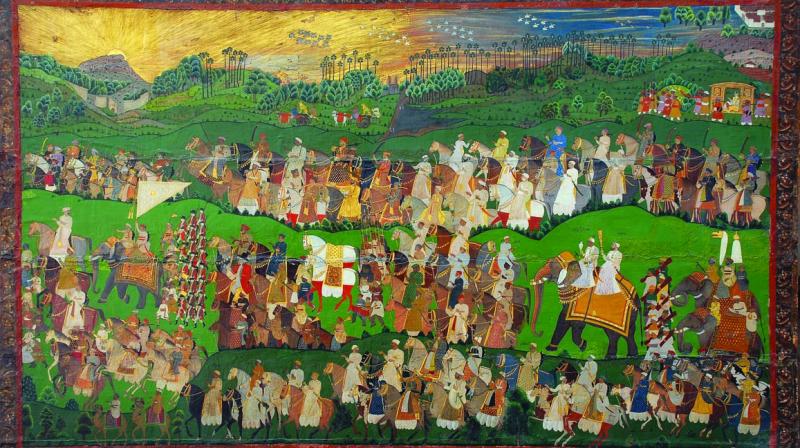 Nizam on a hunting expedition

If one flipped through the pages of Indian history, the chapter of the French influence in India is something that is completely absent. Ironically, many Indian rulers had French-speaking officials in their kingdom.

It is with an aim to bring the unseen chapter to the spotlight, an exhibition titled ‘Rajas, Nawabs and Firangees, Treasures from the French and the Indian archives (1750-1850)’ is currently underway at the National Museum in collaboration with Bibliotheque Nationale in Paris and Alliance Française de Delhi.

The exhibition has three parts to it — the first part displays the Indian rulers and their French officers, the second part covers a selection of sacred Indian texts which explores aspects of Hinduism, Islam and other religions, and the final series captures French nationals, focussing on their perception shift towards India during that period.

The curator of the show, Samuel Berthet, expresses that the artworks on display throw light on a period of history that was dense in terms of exchanges. He explains, “It is very dense in terms of happenings because of the alliances made between different Indian rulers, the British. There were a lot of things happening not in terms of military technology but in terms of knowledge.”

Speaking about the significance of these works, he highlights, “It (these works) throws light on a little known aspect of Indian history that there have been French-speaking officers serving Indian rulers. It throws light on the wide range of skills of the Indian artists.” He also points out that even though European technology was controlling the world back then, the Indian lifestyle was equally praised.

These paintings send one into a flashback. “Written history means something and the iconographic documents make or break that written history because it is about looking through the eyes of the people of that time. It was the aim of the exhibition to recreate a visual atmosphere of those years,” he says. He further adds that going through 1,000 images was a very fascinating experience.

India and France are two countries that possess an immense history of art. It compels one to wonder if they have something that is artistically similar about them too. Samuel clarifies, “It is true that art in French history has played a very important role. In India, the rulers were patrons of art and the magnificence of rulers had to be reflected by beautiful pieces of art. So, there is a resonance between both parts of the world in terms of how essential art is for both.”

— The exhibition is ongoing till December 7