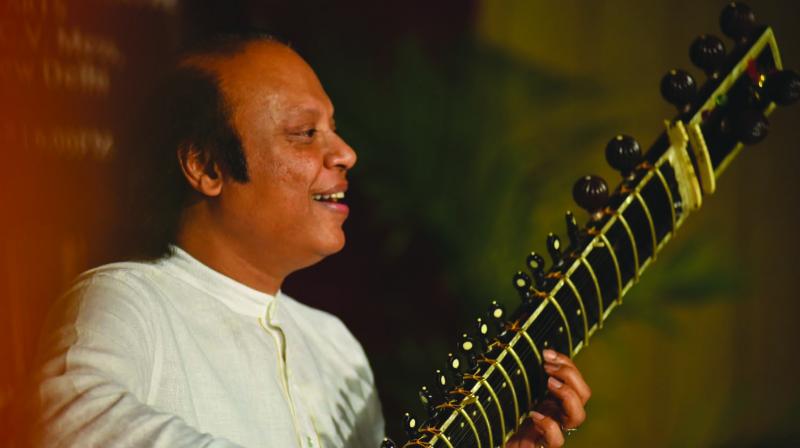 In its series of Purnima concerts, held every month on or around the night of full moon, IGNCA presented Ustad Nishat Khan’s sitar recital. Entitled “The Music of the Monsoons – the Magic of the Malhars”, the recital focused on Raga Malhar and its forms. Ustad Nishat Khan declared he loved playing Malhar, and since the window to present it was so short, only in the monsoons, he waited for an opportunity every year to play Malhar. An additional inspiration appeared to be the birthday of his hero, Ustad Vilayat Khan on August 28th; Nishat dedicated his concert to the memory of this legend. Indeed he reminded many listeners of his uncle, as his smile, singing voice and posture are very like Ustad Vilayat Khan sahib. Indisputably, one of  the finest sitar players today, though perhaps not the most popular, Ustad Nishat Khan combines a lyrical temperament with the full “taalim” of his gharana, (the premier sitar playing gharana of India, the Imdadkhani, with a 6 generation history) along with great “riyaaz”. What makes his music distinctive unlike others of his ilk, in addition to his vast repertoire of sitar craft; (he can produce a bewildering variety that cannot fail to dazzle) he also has musical “bohtaat” (expansion of expression). This concert was unusual in that though over 2 hours long, Nishat also displayed an appropriate sense of proportion in his performance, not overly lingering over any portion.

Starting with Raga Mian ki Malhar, the main Malhar modified by Mian Tansen himself, the maestro leisurely slowly exposed the complex Raga. The mood was set even during the tuning of the “tarab” wires in which he showed the shape of the Raga; something peculiar to his “gharana”. He initially played notes on both main strings creating a pleasurable effect of harmony. With exquisite “meend” work, he focused on both “nikhads” which are the heart of Mian ki Malhar. His hour long slow unfolding of the Raga concentrated more on theses notes; approaching the notes from every direction, coaxing every nuance and every inflexion with careful attention. The “jor” and “jhala” portion were relatively shorter, though equally enjoyable, with a variety of “choot”and “gamak” taans, ending in a fast “ulta” jhala in which his “meend” work was executed brilliantly His undeniable mastery of his sitar is revealed even in his posture, which speaks of his control and total poise.

It was in the Gaur Malhar that Nishat totally relaxed and played with abandon, “mazze mein”. When any artist on stage lets go, and plays not to prove anything, but to simply savour the music he has within, which he allows to come out without restraints, the result is always spectacular; the “asar” conveyed instant. Great music is really not only about the speed or the intricateness of execution; these are tools only. The minute Nishat tuned his sitar’s third wire to the “ga”, ending the first piece, there was a perceptible expectancy in the audience. Playing a brief introduction, he then played two compositions in “teen taal”. Interspersing his recital with singing the lyrics of the composition, Nishat played like he was really enjoying himself, every now and then creating something so exquisite or so beautifully executed that there was spontaneous applause. The front row comprised musicians and seasoned listeners who knew his music inside out, and inspired him to play his best. Our classical music needs audience interaction; the artist feeds off the vibes he receives, and his creativity soars when he senses appreciation.

The second “gat” in Gaud Malhar was  made by Ustad Vilayat Khan; played in “drut” laya it is difficult to keep  the clarity of the strokes, but Nishat of course played it to perfection. His measured display of different aspects of sitar craft, the “silsidaar” (sequential) progression, his delicate touch were a true delight. Weaving in snatches of different compositions, the master leisurely gave his audience his unmatched interpretation of Gaur Malhar which included a hint of Nat Malhar. Ending in a thrilling jhala, proving to the young musicians in the audience that he has still maintained the form he has been known for all his life, Nishat concluded his recital with a brief Bhatiyali.

On the tabla, which provided a beautifully supportive “sangat” (the very word means with, in support of) was the sensitive Amjad Khan of the Delhi gharana, son of the esraj maestro Ustad Allaudin Khan. Amjad played with restraint, choosing not to interrupt the mood created by Ustad Nishat Khan, not giving in to the temptation to interject with prolonged complicated pieces that he is well able to play, and win audience applause. With true musical good breeding, he allowed the great music that was being created to proceed.

Ustad Nishat Khan’s relative rare concerts in India ensured there was an over full hall; extra chairs had to be brought in for at least an hour after the concert started.