The play was an attempt to show the trauma in the life of Karana. 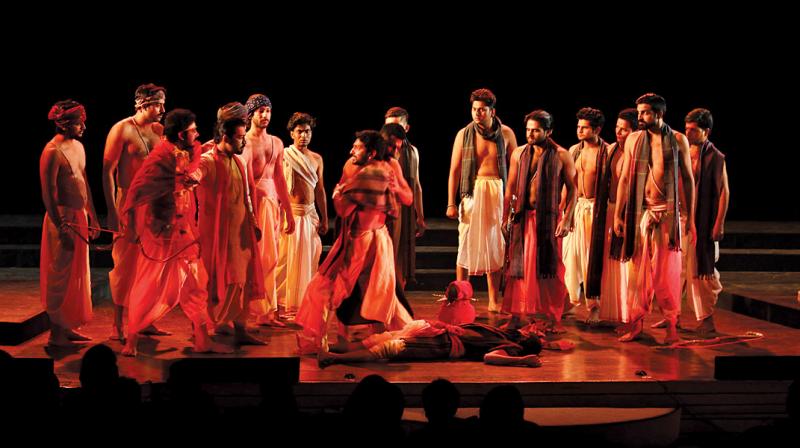 Artistes stage a play, Maharathi, based on the life of Karna, a character from war epic Mahabharat.

It was Mahabharat once again. Harfkaar Foundation in collaboration with 3 Penny, presented Maharathi, written by Vibhanshu Vaibhav and directed by Krishna Kanth. The play was an attempt to show the trauma in the life of Karana. It is also a reference to the caste system that prevails in India till today.

The scenes were of the last days of the epic war, birth and the life of Karana and the identity crisis he faced. He is born of Kunti and the Sun god. The latter gives him a ‘kavach’, which is part of his body and earrings, which are also a protection against any attack by an enemy. He thinks he is invincible and Lord Indra comes as a beggar and asks him for his ‘kavach’ and earrings, he promptly takes a knife and tears off the ‘kavach’ from his body and gives it to Indra. Karana is known for his generosity and kindness to beggars, so he never refuses anyone.

His confrontation with Kunti is sympathetic towards Karana. She enters asking him for recognition of the fact that she is his mother. He tells her about all the things she did wrong and that why he should accept her as his mother now. When he was a child, Kunti floated him in a basket but luckily he was rescued from certain death by Adhiratha, a low caste fisherman, who brought him up. When Karana is spurned by Draupadi at her ‘swayamvar’, he is forced to take sides with the Kauravas against his brothers, the Pandavas.

His blind commitment to the Kauravas and true logic, where Krishna is portrayed for the first time as a political figure, are parts of the play well crafted. The scene where Karana, played by Jatin Sarna, rejects his mother amazed everyone. Happy Ranjit as Krishna looked suave and alive. In a white kurta pajama, his hair combed back neatly and his moves around the stage reflected a true political personage.

Duryodhan, played by Sahil Singh Sethi, was almost a new character in the play with reasonable sensitivity and command over his people. His search for truth reminds me one of Ratan Thiam’s Chakravyuh, where Duryodhan is portrayed as a searcher for dharma.

The ‘swayamvar’ scene was dealt with rapidly, with Karana trying to shoot at the eye of the fish and succeeding in it and hence, winning Draupadi’s hand in marriage. However, she screams out from behind, saying “I will not marry a Suta Putra”, meaning the son of a low caste man. Karana goes away but not before Duryodhan makes him the King, who he meets for the first time. Later, Arjuna comes up and shoots in the eye of the fish. In the ‘swayamvar’, Draupadi comes and garlands him.

The role of Karana, an important and contreversial character, is apt for literary works. And this play is no exception. The playwright tackles his character as we know him through the Mahabharat and adds nothing new to what we already know of him. Maharathi, a Sangeet Natak Akademi award winning play, was originally done in early 90s with actors Saurabh Shukla and Manoj Vajpayee nder the direction of Sri Krishna Kanth.