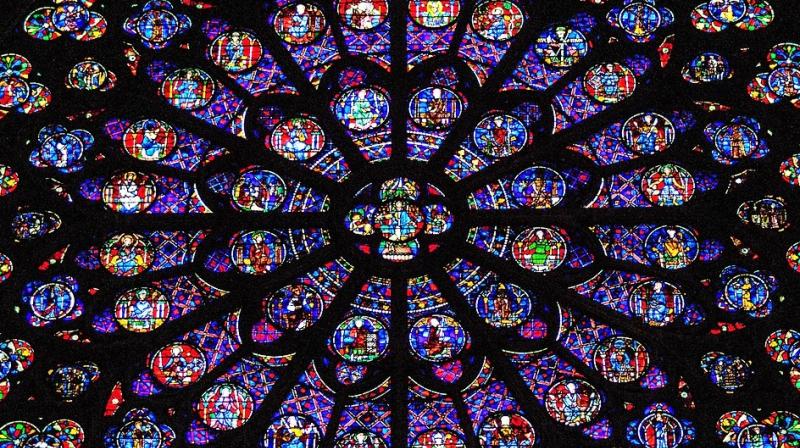 Notre-Dame’s famed stained-glass rose windows and most of its many religious relics appeared to have escaped the worst of Monday’s inferno, easing fears for the fate of the vast trove of artworks. (Photo: Representational/Pixabay)

Paris: Four-hundred-year-old paintings hung high inside Notre-Dame were damaged by the immense fire that engulfed the Paris cathedral, but emergency workers formed a human chain to whisk gem-studded chalices and other priceless artefacts out of harm’s way.

Notre-Dame’s famed stained-glass rose windows and most of its many religious relics appeared to have escaped the worst of Monday’s inferno as well, easing fears for the fate of the vast trove of artworks in the 800-year-old gothic cathedral.

Among the most cherished articles to make it out unscathed was the “Sainte Couronne” (holy crown), made of braided reed brought to France from Constantinople in the 12th century. Though lacking its original thorns, the crown has been revered as an object of Christian worship for centuries.

Gold, silver and gem-inlaid chalices, candelabras and many other artefacts survived the blaze thanks to quick-thinking fire-fighters, police and city employees who formed a human chain to move revered artefacts away from the flames.

Paris Mayor Anne Hidalgo tweeted a picture of heavy-set candlesticks stacked in the safety of nearby Paris City Hall.

Art specialists were still poring over the extent of the damage to Notre-Dame’s 13th-century South Rose Window, measuring 10 meters across (33 feet), and other stained-glass masterpieces still standing after the cathedral’s wood-beamed roof collapsed.

“It seems they have not been destroyed for now, although we’ll have to see what real state they’re in, and whether they can be restored properly,” said Maxime Cumunel, secretary general of France’s Observatory for Religious Heritage.

“We have avoided a complete disaster. But some five to 10 per cent of the artwork has probably been destroyed, we have to face up to that,” Cumunel said. Four of the largest-scale 17th and 18th century paintings depicting scenes from the lives of the apostles had been damaged, at least in part, he added.

Culture Minister Franck Riester said the paintings were mainly affected by smoke damage, rather than by flames.

The artworks, which were dampened during the 15-hour battle to douse the blaze, will be removed from Friday and transferred to the Louvre museum, where other objects will also be kept, for attempts at restoration, he added.