An exhibition of artworks that aim to revive the lost art and charm of Batiks on cloth. 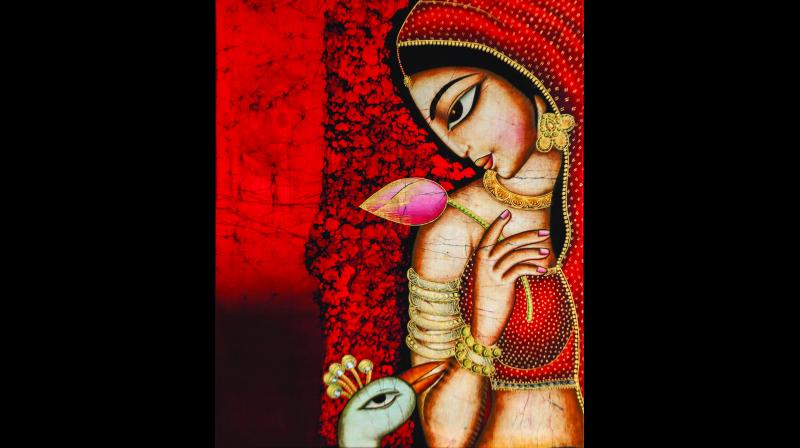 The art form has its roots dating way back to the 1st century AD. But, now there are only a few artists that practise batik.

It is always believed that the value of any item, a person is realised once it is gone. Same is true with the visual arts and more specifically, the batik art form. The art form has its roots dating way back to the 1st century AD and as time went along, now there are only a few artists that practise this form of art and Mandira Chawla is one of them.

Originally from Indonesia, the artform came to India in the form of textiles and later, it was made into a painting. Traditionally, the form captured divine figures but nowadays, there is a diversity of subjects. The technique comprises of colouring the cloth by hiding a part of the cloth with wax. When the cloth is dyed, the wax is removed that creates a contrast between the dyed and undyed area.

The art form came to her while she was in her childhood and her father being an artist, she always “dabbled with some form of art.” Mandira recently exhibited her works at Imperfecto Shor, Aerocity where she exhibits her batik works on cloth along with ink works on paper.

There is a certain intricacy that is noticed in these works. She says that these works have been made intricate as batiks traditionally were never intricate. She continues, “When we were trying to revive the art form, we thought the figures needed intricacy, finesse and that is what I have tried to do.”

In batiks, it is believed that the more the cracks on the painting, the better the artwork, and it was something her father echoed too. She explains the process, saying, “Whenever you are tracing on cloths, the batik goes through a series of washes with wax and dye and then you remove it. There are a lot of cracks created.”

Her works tend to have a calming effect that these works possess. And when asked the reason why is that the case, she responds, “I don’t know why? Further continuing, “I have done these works with a lot of feeling and that is showing through and I am glad that it is.”

That was the batik side of things. Coming to the other section of her works that involve ink works on paper, where she actually captures golf as her subjects. She, herself is involved in the sport and capturing the sport on paper was just “by chance”

Another interesting aspect of her works is that the artist has hidden her name in the works and only Mandira knows where the name is hidden. So would it be a mystery breaker if someone finds the name? She responds, “It would be great if they have figured out the name of the artist. For them (the one who would find it), it would be a feeling of elation.”

When asked about how she felt about the fact that these works are out there in public, she simply responds, “Great!” But, there is a problem that arises with her works and that is one tending to lose him/herself in while seeing her artworks to which, she concludes, “That is what I want the people to feel. If they get lost, that’s phenomenal.”