A rabbit by Jeff Koons sold $ 91.1 million, record for a living artist. 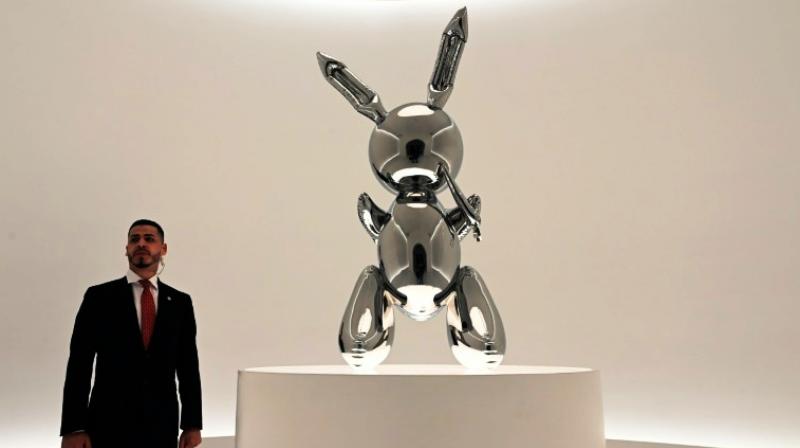 This is a new triumph for the controversial visual artist, who has sparked endless conversations since his emergence in the 1980s over the artistic and commercial value of a work. (Photo: AFP)

Washington: A sculpture by American artist Jeff Koons was sold recently for $ 91.1 million in auctions organized by Christie's in New York, a record for a living artist. The "Rabbit", a steel casting of an inflatable rabbit, blew the "Portrait of an Artist (Pool with Two Figures)" painting by British painter David Hockney, who had reached 90.3 million in mid-November, already at Christie's in New York.

The star sculpture of Christie's Spring Sale was sold for $ 80 million, the same hammer price as Hockney's canvas, but broke the record by adding commission and fees, with a final price of $ 91.075 million dollars.

Unusually for a work of this award, this rabbit, which is part of a series of three by Jeff Koons in 1986, was awarded to a person in the room. The 64-year-old visual artist recovered the record he held before being briefly dethroned by David Hockney.

His "Balloon Dog (Orange)", sold $ 58.4 million in 2013, had held five years. The "Rabbit" is one of the best-known works of the artist who has shaken up the conventions of the world of arts. Top 104 cm, it comes from the collection of SI Newhouse, former boss of the press group Condé Nast (deceased in 2017), which includes magazines Vanity Fair, Vogue and The New Yorker.

For Alexander Rotter, president of post-war and contemporary art at Christie's in New York, "Rabbit" is "the most important piece of Jeff Koons," he told AFP during the presentation auctions. "I would go even further, it is the most important sculpture of the second half of the twentieth century," he added. "It's the end of the sculpture, it's the anti-David, as I call it," he said, referring to Michelangelo's masterpiece (1501-04).

For Alexander Rotter, "you cannot go further than David while remaining figurative and in traditional sculpture". This is a new triumph for the controversial visual artist, who has sparked endless conversations since his emergence in the 1980s over the artistic and commercial value of a work.

An outstanding salesman, he regularly raised controversies, notably with his paintings and sculpture in which he copied with the former Italian film star La Cicciolina, whom he married in 1991 (divorce in 1994).

His studio is still based in New York, where he arrived in 1976. In 2015, before parting with his team, he employed more than 100 people, working with absolute mastery of materials, to obtain the rendering longed for.