Several paintings, dance, theatre & music performances, which derive inspiration from centuries-old epics, speak of the past in modern ways. 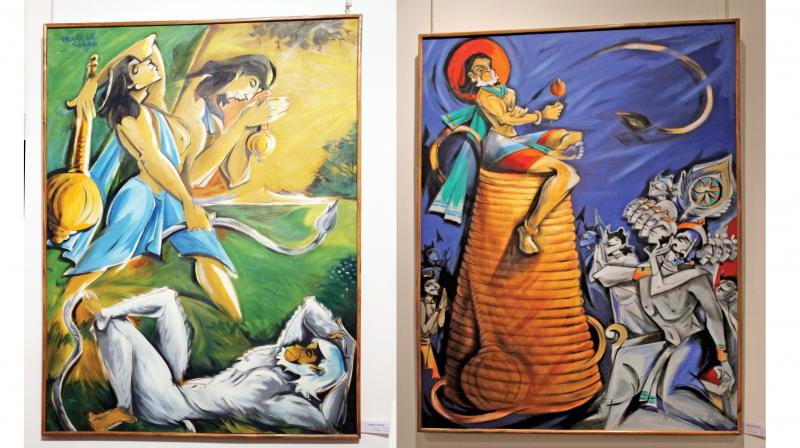 Many of the well-known and not so well-known stories from Hindu mythology come back to the audience as it admires the paintings by Makhan Saha at his art show called Know The Known Epics, curated by Sandeep Sen.

Epics are a huge interest area for me —especially the Mahabharata for I genuinely believe that what is not there in the Mahabharata doesn’t exist. Every human emotion, every story, every experiment, every event has a contemporary corollary. I suppose that is why they are called “epics” for they are so closely related to human existence. Countless dance, drama, music, theatre, puppet theatre, painting forms are dependent for their repertoire on the epics, and it would not be possible to imagine these forms without the spine of the epics.

Last week I was invited by an erstwhile neighbour and subsequent friend Sandeep Sen who is an art aficionado to inaugurate senior artist Makhan Saha’s art show Know The Known Epics that Sandeep had curated, I was most enthusiastic for it meant one more dimension to the epics. Apart from everything else, I must say that I simply loved the conch being sounded when the show was being inaugurated. There is something so touching about its very naad that you can’t remain unmoved by it.

The artist had chosen the format of the nine rasas or emotions to delineate the epics, choosing specific instances to depict the rasas. The most hilarious on hasya rasa has to be the artist’s take on Hanuman’s tail — one when Ravana refuses to offer a seat to him in the court and Hanuman makes a spiral chair for himself from his tail as he laughs at the circumstances. Another when Pandavas are proceeding heavenwards, Hanuman decides to play the fool with them and lays down in their path. Bhim gets very incensed and rebukes him to remove his tail saying that he was obstructing the mighty Pandavas’ path. Hanuman challenges him to remove his tail as he is a mere “vanar”. When Bhim goes to do that the tail becomes so heavy that he is unable even to move it. Hanuman reveals his true self. I remembered the place in the Garhwal Himalayas is known as Bandarpoonch. Many of the well-known and not so well-known stories came back to me as I stood admiring the works.

The most poignant has to be Draupadi’s cheedh haran when she calls out to her sakha Lord Krishna to save her from the ignominy of being disrobed in the Kuru Sabha. The helplessness of five hale and hearty males being unable to protect an “ablaa” and as she prays to her friend Krishna to save her and he makes her saree endless is beautifully depicted with just a peacock feather marking his presence.

Saha’s large diptych of the Mahabharata war itself is evocative complete with a surreal image of Bhishma pinned with Arjuna’s arrows. Abhimanyu’s wheel as the brave weapon and Karna’s kundal and kavach make a sad but important point of veer rasa or valour tinged with deep sadness about the futility of war. Since the works are figurative, there is an illustrative element to them, but undoubtedly they can be used in myriad ways by museums depicting the epics and in publications that talk about the epics. For they are modern in perspective yet highlight tales from the epics.

Simultaneously at the other galleries of Lalit Kala Akademi were running two shows one of IGNOU Professor Lakshaman Prasad and the other of Sandip Suman Bhattacharya, an artist from Kolkata who also is a set designer and an actor involved with children’s theatre. Bhattacharya’s show titled Sharp Cut was seemingly simple but was replete with human connect and emotions that set it apart from usual shows. His theatrical and film experience was evident in his work as the figures had a puppet theatre element to them. In fact, I was reminded of Satyajit Ray’s film Gopi Gayan Bagha Bayan. But what elevated the show majorly again had to do with his experience in the theatre: Lighting. Only a set design person can light art like that to such amazing effect that one can only marvel at the sheer presentation. The total impact was dramatic – pun firmly intended! Saw such well-packaged show after a long time.

On the other hand, Lakshman Prasad’s solo was involved and intense with layers, and layers in them and technique and surreal drawing taking centre stage and the aesthetic use of colour and their progression was as beautiful as a dance show in progress.

The same evening the Dhoomimal Gallery, as they complete their 80th year, released a detailed history of the gallery and of the family, which has nursed it. A two-volume book complete with archival photographs and little-known facts gleaned from their friends, patrons was launched. Set up in 1936, Dhoomimal remains the first, foremost and oldest surviving art gallery in Delhi. One of the two volumes, A Legacy Of Art by Shona Adhikari, recapitulates the history of the Dhoomimals with their origins going back to old Delhi — Katra Dhoomimal still exists in the maze of lanes in Chandni Chowk, their rise as traders in paper, stationery and artists’ material, the keen interest of one of their forbearers, Ram Babu, in art and his subsequent patronage of Indian artists in the 1940s culminating in his publishing a string of monographs on artists which are collector’s items in their own right. For the record, their fine art offset press was inaugurated by Pandit Jawaharlal Nehru.

The other volume, edited by Vinod Bhardwaj and Brij Sharma and titled Trends And Tradition: Eighty Glorious Years, offers an overview of the gallery’s progress and expansion from the time it was taken over by Ram Babu’s son Ravi Jain and, after he passed away, nourished by his wife Uma Jain and then by son Uday Jain — in their own words and through essays by the two editors. Beginning with Sailoz Mukherjea, Nicholas Roerich, Jamini Roy and Abdur Rahman Chughtai, the gallery went on to offer space, solace, funds and publicity to the likes of Jagdish Swaminathan, F. N. Souza, Krishen Khanna, Ram Kumar and Gade among others, in many cases as their first patrons and promoters.

This volume also includes essays by and about many of these artists, interviews with some of them, and reproductions of their early catalogues issued by Dhoomimal interspersed with a profusion of colour reproductions of their works. It is a splendid idea to bring it out in book form. In fact, more art institutions should follow suit and capture history as it happens.