Whoever may come, Rukmini Devi’s magnum opus will remain a benchmark in the arena of creative work. 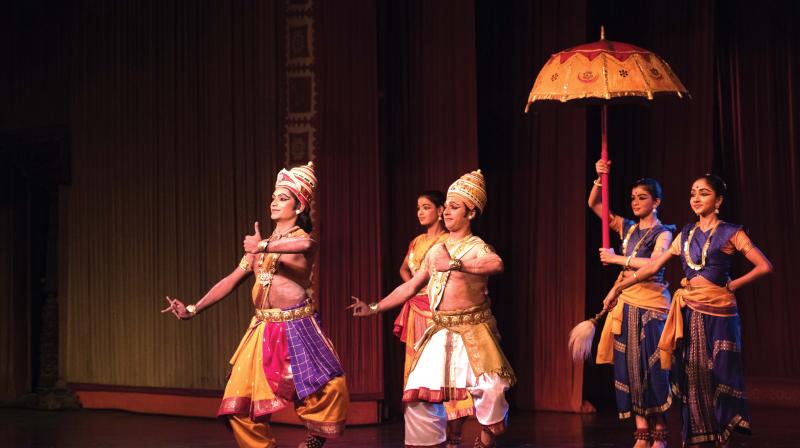 Having watched Kalakshetra’s Ramayana countless times, one is reminded of Rukmini Devi’s statement about the difference between creativeness which comes from within and is a matter of conviction and internal evolution, and inventiveness which is more mechanical.

It was February of 1980. In a private exchange with me on the verandah of his home, late K. Chadrasekharan, the well-known lawyer-cum-Sanskrit /English/Tamil scholar was reminiscing about Rukmini Devi approaching him (he was on the Kalakshetra Board) regarding working on a dance series based on Valmiki’s Ramayana, his first reaction being that she was seeking the path to artistic hara kiri. “How could any sane person even think of emulating through any medium the power and grandeur of Valmiki’s poetry?” Having heard for a month, his daily pooja with prolonged recitation from Valmiki Ramayana, I knew of his passion and scholarly depth on this epic. “It was when I was treated to her Sita Swayamvaram (produced in 1955) that she went up in my estimation as an exceptionally creative individual, for apart from the unforgettable music of Mysore Vasudevachar which in musicality and emotive power added muscle (if that were possible) to Valmiki’s poetic genius, Rukmini Devi’s natya interpretation created a new aesthetic dimension, without ever deviating from the poetic authenticity.

Since then having watched Kalakshetra’s Ramayana countless times, one is reminded of Rukmini Devi’s statement about the difference between creativeness which comes from within and is a matter of conviction and internal evolution, and inventiveness which is more mechanical. That Valmiki’s poetry was the Muse inspiring both Rukmini Devi and her legendary musician cannot be doubted. Vasudevachar allowed the poetry to dictate his musical instincts, bringing out the moods — in the process creating his own ragas like Chittabhramari when Dasaratha pines and agonises over the turn of events, and Gangalahiri when Rama and Lakshmana are crossing the river in the boat. Since then, the musical foundation as a take-off point, gripping in its richness in simplicity, coupled with Rukmini Devi’s insightful choreography and imaginative interpretation, have been wooing audiences repeatedly into a willing suspension of disbelief. As the chief guest Robert G. Burgess, consul  general of the United States, who sat through to the end,  said in his inaugural statement that art deals with what is most fundamental to human experience, its language transcending all political differences. And indeed one saw how during these presentations, cultural boundaries got erased in the way the entire audience responded.

It is the entire aura provided by the Kalakshetra ambience that brings out the full impact of this series. Unfortunately one begins to feel that the Ramayana productions do not travel well for they seem to lack the same power when enacted in other venues. One has to experience them in the Kalakshetra setting with that crackle of expectancy in the air, before and during the presentation, to feel its full impact.

The experience begins at the entry point with Rangoli patterns, young smiling ushers, visitors from all walks in their fine Kanjeevaram sarees, snow white dhotis and jubbas or western outfit — the stage in the Rukmini Arangam greeting you with its aesthetically laid out altar (one level below the main performance area) with Rama’s idol, and beside it Rukmini Devi’s garlanded photograph with lit lamp, incense, camphor and flowers.

Pin-drop silence as vocalists K. Sai Shankar and K. Hariprasad sing the invocation, with homage to Ganesh, Hanuman (Janaki shoka nashanam), and Rama with the exhortation that the poetic river flowing from the mountain of Valmiki, merge in the ocean of the Ramayana — and the tone is set. The immaculately coordinated group dancing of a tillana in raga Begada ushers in the palace scene as Vishwamitra (played by Janardhanan, long-time associate of Rukmini Devi, who as guest faculty, directs all her old productions presented by Kalakshetra) is warmly and respectfully welcomed by King Dasaratha. The sage’s quick anger when the King hesitates to send Rama and brother Lakshmana to safeguard his Yagna by fighting the polluting evil demons, is assuaged by sage Vasishta’s prompt intervention, mollifying Viswamitra while allaying the King’s fears about the ability of his sons to deal with the  situation. As Vishwamitra sets off with the two princes, an entire forest comes alive for the viewer — visualised through Vishwamitra’s gestural/expressional interpretation — of birds and greenery (Vasanta ragam), trees and flowers, cooing birds and the mighty forest elephant. The Ashram is reached and the young princes successfully destroy the rakshasas to safeguard the sage’s Yagna. The pleased sage, along with his young saviours, set off for Mithilapur and the court of King Janaka, Rama on the way resurrecting Ahalya. And, through lilting music in a host of ragas like Kambodhi, Hindolam, Bilahari, Kuntalvarali, Arabhi, Kalyani, the narration moves. The central Sita’s Swayamvaram scene unfolds and the images that stand out are Sita’s beautiful face anxiously watching from behind the window, and the seated powerful, sphinx-like figure of a red skirt-clad Ravana (enacted very convincingly by Jaikishen) unblinkingly looking into space, in disdainful aloofness. His boast about lifting Siva’s bow being next to nothing for one who lifted and played with even Mount Kailash, the humiliation in not succeeding is unbearable and after a malevolent side glance at the figure of Rama, he stalks out. Rakesh as King Janaka had the right bearing and dignity. Flowers petals from the top raining on the newly wedded Rama and Sita, make for a fairytale ending.

In the  ‘Rama Vana Gamanam’ episode, Shali Vijayan as Kaikeyi, projected very subtly the gradually changing mind, brought about by the persuasive Manthara that she would become nothing but a slave of Kausalya, were Rama to be crowned King. Through the ensuing tragedy as Rama with wife and brother leave for the forest, the smugness of having got her own way is shaken to the core by her son’s response to what she has done and she finds herself friendless — and the process was brought out in her characterisation. Though not quite the upright and eager King Dasharatha entering his favourite Queen’s palace, to impart the good news of Rama’s crowning, Janardhanan as the anguished broken King, was most evocative. Again the music enhances the emotive thrust at each point through myriad ragas Kamas, Kalyani, Mohanam, Shuddha Dhanyasi, Kambodhi, Natakuranji, Shankarabharanam and what the composer named Chittabhramari. The Paduka Pattabhishekam episode has always been a crowd puller. The scene of Bharata falling at the feet of Rama and the brothers embracing, and all that follows with Bharata having to return to Ayodhya carrying the Paduka as a symbol of Rama, leaves many audience eyes moist. Flowing like sweet nectar, or Manna from Heaven, was the music in Arabhi, Bhairavi, Attana, Charukesi, Bilahari, Hameer Kalyani etc. by a very involved group of musicians seeming to emote through melody and rhythm every turning point in the narrative. Rakesh as Rama an epitome of composure, and Aryamba as Sita were aptly cast.

Choodamani Pradhanam remains another one of the most popular productions of the entire series and it is very encouraging that the young Haripadman has, with finesse, stepped into the role of Hanuman, after veteran Balagopal whose portrayal of the role was deemed the last word, stepped down. The most poignant scene for this critic has always been when Rama with mixed feelings of anguish and hope (that evidence of Sita’s whereabouts has at last been revealed) looking at Sita’s discarded jewellery (which Sugreeva has carefully stored) eagerly asks Lakshmana if he recognises a certain ornament she wore. Lakshmana with a heavy heart replies “Naaham Janami.” (I do not know) for I can only recognise these anklets which I saw every time I sought her blessings. In his deference, he had never raised his eyes to look at his sister-in-law, and hence was unaware of any of the jewellery she had on her body! Sharing a similar fate of losing the wife to an act of abduction, Rama and Sugreeva are like kindred souls, and indulging in a nritta jig set to pure percussion ushers in a sudden relief, from the stricken tension caused by two missing wives – Sita and Tara.  By the time of this production the grand old musical genius Vasudevachar was no more and the mantle fell on his grandson Rajaram (later director of Kalakshetra ) and as the audience was led on this journey through ragas like Sama, Arabhi, Sindu Bhairavi, Mohanam, Kalyani, Todi, Senjurutti, Shankarabharanam, Neelambari, Surutti, Kamboji, one felt that the inherited flavour of the music had not changed.

Maha Pattabhishekam which is the final episode when Ravana is killed and Rama returns to Ayodhya to be formally crowned King has always been regarded as a very special culmination of a journey, which is more like a Yagna. After chantings by priests, the performance starts with Vibheeshana (very effectively played by senior artist Suryanarayanamurthy), unable to impress upon brother Ravana, the injustice of abducting and holding Sita. His attitude of gratitude at being accepted as a part of the Rama squad tinged with the sadness of having to part from a brother is very tellingly conveyed. After the battle between Rama and Ravana with the latter’s killing and Mandodari’s lamenting, the inexplicable way in which Rama receives Sita with her having to prove her chastity, while enacted with restraint and finesse saw criticism from some of the young in the audience seeing the production for the first time  — who had to be reminded that this is totally in keeping with the Valmiki version.

And while the ritualistic details of the process of anointing Rama as King seem to be too prolonged for many who are strangers to the kind of experience that Rukmini Devi wanted to evoke, and who wonder if  all  the reciting of mantras from the Sama Veda (difficult to  procure two persons reciting this with sruti alignment)  and all the other paraphernalia of ritual have place in a performance  — for tempo sags, must remember that what the creator aimed at was to have a very intimate feeling of deep involvement with an auspicious event like the righteous Rama being crowned King. Gireesh Madhu as Rama has the poise but a little more animation in expression would enhance his performance. As comely Sita in the last two episodes was Sridevi. Sreenath made a persuasive Lakshmana. After listening to the music in modes of  Bilahari, Shanmikhapriya, Todi, Begada, Kanada, Kambodhi, Kalyani, Sama, Shankarabharanam, Hindolam, Kamas et al, my feelings were of having been through a very special happening.

Rukmini Devi’s Ramayana down the years has demanded the last ounce of commitment from the participants. Stalwarts have become bywords for various roles and to disengage oneself from this deep involvement with a measure of objectivity is difficult for people like Janardhanan whose spirit is still strong for roles which a less robust physique makes difficult. And his mission will be to train youngsters who will form the next generation of actors. In Jayakrishnan, he has a very promising Ravana in the making. (This fine actor did the humble Guha’s role, and that of Vali with equal conviction). Haripadman is another example as Hanuman and as one of the suitors for the Swayamvaram scene.