Shakti: A return to the source

Jonathan loves India more than what Indians do, he first came to India when he was 16 and his love affair with Indian culture started then. 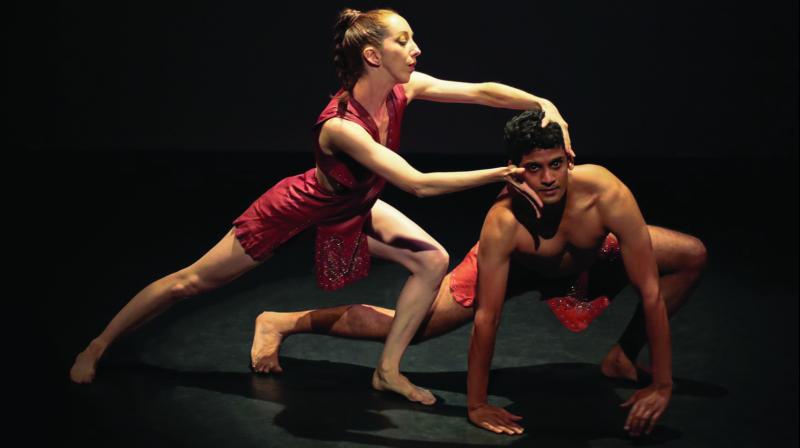 In 2016, for the 40th anniversary of the Battery Dance Company, Jonathan choreographed ‘The Durga Project,’ to celebrate his long and eventful relationship with India.

Many a times on the road of life we meet interesting people at different cross roads, some we forget easily and some etch a wonderful place in our heart. I am talking about one such person who I look up to and regard him as the best in the business. I accidently met him on a social networking site and our first lunch meeting made me realise what an amazing personality he was. Super Dynamic, highly creative, tremendously talented with humility as his second name, all bundled up into one man Mr. Jonathan Hollander.

Jonathan Hollander is one of the outstanding choreographers of his generation and has taken a leadership role in international cultural exchange and social activism. He founded Battery Dance Company in New York City in 1976 and has choreographed over 75 works that the Company has presented in major theaters and festivals across five continents.

The legendary Martha Graham once said for Jonathan ‘I feel that the essence of dance, is the expression of man — the landscape of his soul.’ Now such golden words itself prove that Mr. Hollander is class apart, his work does all the talking and what he does his climb the ladder of success with head on his shoulder.

In 1982, he created the Downtown Dance Festival (now renamed Battery Dance Festival) which has since become New York City’s longest-running dance festival.  He established arts education residencies at the primary, middle and high school levels in New York City public schools; and served as Fulbright lecturer on dance in India in 1992, and Fulbright Specialist in Malaysia in 2011. Notable performances of Hollander’s works have been presented at Lincoln Center, Beijing International Modern Dance Festival, Taipei Arts Festival, Open Look Festival in St. Petersburg, Stockholm’s Moderna Museet, Alexander Theater and Tampere Biennale in Finland, Hyogo Performing Arts Center in Japan, Cultural Center of the Philippines, Krizanke Theater in Slovenia, National Dance Theatre in Budapest, Varna Festival and European Cultural Month in Bulgaria, and on national tours and television broadcasts in Poland and India. Hollander’s work has been supported by the Educational and Cultural Affairs Bureau of the U.S. Department of
State, U.S. Embassies and Public Diplomacy Offices of Regional Bureaus; National Endowment for the Arts, New York State Council on the Arts, New York City Department of Cultural Affairs, Rockefeller Brothers Fund, Ford Foundation and many others. Hollander received the Silver Mask of the Silesian Dance Theatre (Poland), the USable Award (Germany) and the Arts & Business Council’s Encore Award. Under Hollander’s leadership, Battery Dance Company actively supports the commissioning of new musical scores and the inclusion of live musical performance in its productions.

Hollander has lectured on Arts Management and Arts Education in countries as diverse as France, Greece, India, Mongolia, Paraguay, Poland and Taiwan.  He is collaborating with iKapa Dance Theatre in creating the Cape Town International Dance Festival. Hollander has facilitated US tours by many of India’s leading dance companies and co-founded the Indo-American Arts Council in 2000

Jonathan loves India more than what Indians do, he first came to India when he was 16 and his love affair with Indian culture started then. When I asked him about how his work is inspired from India he said, “the vast and diverse culture of this magnificent country always fascinated me. My teenage days that I enjoyed, immersed in it from an early age and interacting almost daily with dancers and musicians, has informed and inspired creative endeavours. ‘

Jonathan’s international exposure gave him the right perspective to focus on contributing to society through his Battery Dance Company, His earliest initiative was to establish arts education residencies at primary, middle and high school levels in New York Public schools. He started ‘Dancing to Connect’, an intensive 20-hour programme, that brings together a diverse group of students to engage in creativity and team-building through modern dance. Since 2006, the Company has successfully implemented the programme in 50 countries.

Jonathan added, ‘In Thailand, some students who were rescued sex workers and had experienced many horrors in their lives were a part of this programme and this module  had a therapeutic effect, helping them deal with their trauma.’

Jonathan travels the world but India is always his priority and will always be. He made his choreographic debut in India with ‘Moonbeam’, featuring Mallika Sarabhai and Sashidharan Nair. It was staged in Ahmedabad in 1992 and was later presented in New York. For his next production, ‘Seen by the River’, he collaborated with Badal Roy, the first Indian jazz musician, to break into mainstream. In 1995, he premiered ‘Songs of Tagore’ in New York with his dance ensemble. He toured 17 cities in India with the production which received rave reviews. The same year he presented ‘Purush: The Expressions of Man’ at The Music Academy It was greatly appreciated in India and also by the diaspora, when he later took it on an extensive US tour.

In 2014, Jonathan’s Company conducted an outreach programme in Mumbai and New Delhi for survivors of human trafficking to address the issues of exclusion in society. It was a path-breaking and poignant moment when these people overcame their inhibitions and performed on stage.

In 2016, for the 40th anniversary of the Battery Dance Company, Jonathan choreographed ‘The Durga Project,’ to celebrate his long and eventful relationship with India. Initially inspired by the soul-stirring rendering of raag Durga by Pt. Rajan and Sajan Mishra, he later correlated it with the powerful imagery of Durga as the source of female power. Jonathan collaborated with Unnath Hassan Rathnaraju, a Bharatanatyam dancer from Karnataka, to perform with the ensemble and integrate Indian and western movements.

Jonathan is constantly seeking avenues to further explore fresh Indian concepts and showcase them to the world. Last week ‘The Durga Project’ stepped into Indian shores.,  Shakti — A Return to the Source with a fervent hope that Indian audiences will appreciate his non-religious interpretation of Durga as a feminine force portrayed through the universal language of dance premiered at St Andrews Auditorium in Mumbai and weekend saw a house full opening in Pune too.

The show will now travel all over India. Bangalore on Jan 20th Kolkata on 24th Jan and finally New Delhi on Jan 31. Please take my word this show will mesmerise you with dance technique, body control n most importantly the way Mr Hollander has put it all together. A Show totally class apart, not to be missed.

Sandip Soparrkar is a World Book Record holder, a well known Ballroom dancer and a Bollywood choreographer who has been honoured with two National Achievement Award and one National Excellence Award by the Govt of India. He can be contacted on sandipsoparrkar06@gmail.com