It’s not too late yet to say ‘sari’

Earlier this week, its founder-chairperson, author and poet Sunita Buddhiraja, actually wore her 365th sari on the forum. 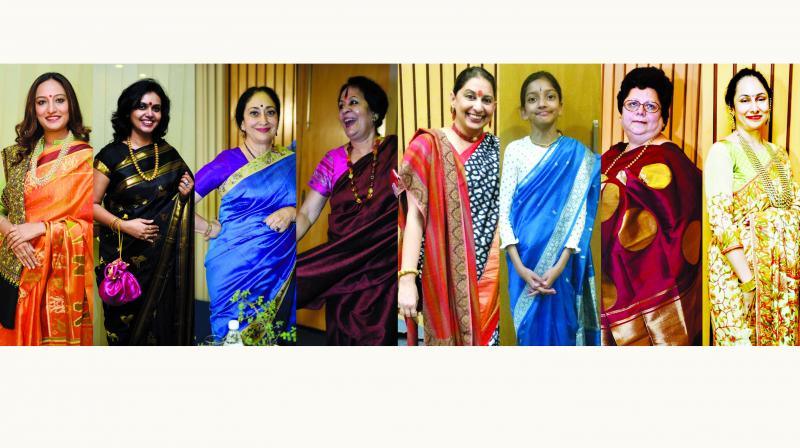 A collage of people on the ‘Six yards and 365 days’ (Photo: Facebook Group)

The far-reaching impact of the social media can never be highlighted enough. But when the virtual outreach becomes a reality, one can but be humbled by its sheer ability to touch people’s lives. I recently had an amazing experience when “virtuality” became reality: I am the founder-member of a closed sari group “Six yards and 365 days” on social media, which was started little over year ago with the intent of garnering support for traditional weavers and artisans and enthusing the generation next into sporting saris more often.

Earlier this week, its founder-chairperson, author and poet Sunita Buddhiraja, actually wore her 365th sari on the forum. It was a reason for a “real” celebration. I can say from personal experience that it is not an easy feat. You not only have to wear the sari, but also have someone who will photograph you and write a post that will hopefully be of interest to other members. About 100 members of the group met in Delhi under the banner to reiterate the achievements of the group: With 8,000 members and counting, the best part is that nearly 70 per cent of the members are in the age group of under 45. This implies that many have not necessarily seen their mothers sport saris all the time. Of course, there are others who have grown up seeing their mothers wear only saris everyday and took to it naturally like fish who didn’t need to be taught how to swim.

“The campaign has become not just an album of pretty women in their inexpensive or expensive saris, but a group that works with a thought to save saris from getting extinct, and supports the weaving community. In the past year of its existence members have posted more than 100 varieties of hand-woven saris many of which we do not usually see. We do not post any synthetic or power loom saris. It has also become a knowledge-sharing group in which we write about each and every sari, its intricacies, weave, and the story behind it as we believe that every sari has a story to tell,” says Sunita. 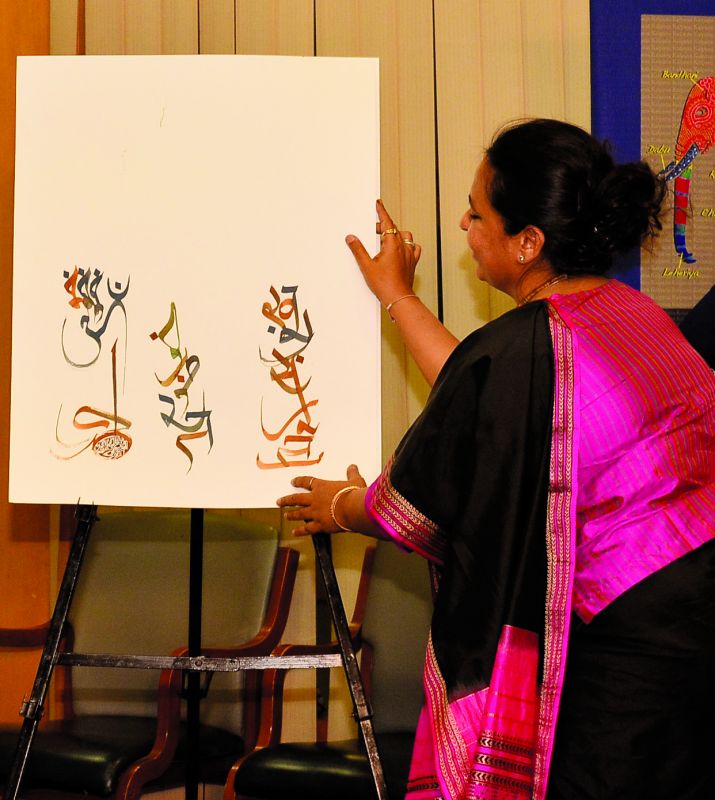 Members include artistes and artists, authors, theatre persons, educationists, entrepreneurs, doctors, NGO workers and communication professionals to housewives and weavers who come from underpaid, middle- and low-income groups. They are in the age group of 20 to 70 years and above, and come from every nook and corner of India, besides several members from US, Canada, UK, the Middle East, the Far East and other parts of Asia including Pakistan.

The group’s cultural bent was highlighted with the choice of the special guests, cultural icons and danseuses Sonal Mansingh and Sharon Lowen, who have been, and continue to be, great and consistent votaries of the sari and they recounted their journey with and in the sari over the years.

Sonal Mansingh’s exquisite taste in saris is legendary. I remember a few years ago I went to a well known sari shop in Bhubaneshwar and asked for a specific sari and he recounted with great pride that “Madam you know the great dancer Sonal Mansingh? She had come to my shop yesterday and she has bought all the nice saris I had! So please come next week!” So I was forced to choose from what she didn’t buy! The vidushi dancer shared images of some of the antique and special saris in her collection.

Many of you are aware that Sharon Lowen is an American who has chosen to make India her home over three decades ago. She has learnt many dance forms including Odissi, Chhau, Kathakali and Western classical ballet. And I must tell you that in the last three decades that I have known her, outside of her dance class, I have never seen her in anything else except a sari and she has the most exquisite pieces in her collection. Sharon’s inspirational journey of the sari I am sure will inspire and impel many others to drape this exquisite unstitched cloth that binds and yet liberates.

The rest of the programme included two Hindustani vocal compositions sung by Gargi Siddhant, one of Pandit Jasraj’s illustrious pupils who accompanies him on stage with vocal support and live demonstration of Sanskrit and Urdu calligraphy on a sari by Qmar Dagar, who hails from the greatest gharanas of Dhrupad singing.  Qmar brought about an extremely difficult sangam of the word and image. She is the only woman calligraphist in India.

Many in this group felt that they received and extended positive strokes to each other about feel good factors of celebrating each others’ saris and sari stories that are part of practically every sari’s DNA. “I have been receiving women who come to meet me with tears in their eyes and share that they felt unappreciated even by their family, but after joining this group, their self-esteem is getting a boost. The sari has become a reason of empowerment and inculcating a sense of pride and self-esteem in women,” says Sunita.

One issue that has bothered me is that the younger generation is moving away from our traditional saris. Our weavers who create gems have been taking on to other better-paying avenues in their search for job options in the cities. They no longer want to sweat it out in the heat and dust of their villages, weaving saris for which they are underpaid. With a result several weaving traditions are becoming extinct. The number of weavers’ families is coming down drastically. The group is already supporting some weavers in Chanderi, Maheshwar in Madhya Pradesh and Maniabandha weavers in Odisha. So the sari has become the thread that liberates.

Dr Alka Raghuvanshi is an art writer, curator and artist and can be contacted at alkaraghuvanshi @yahoo.com