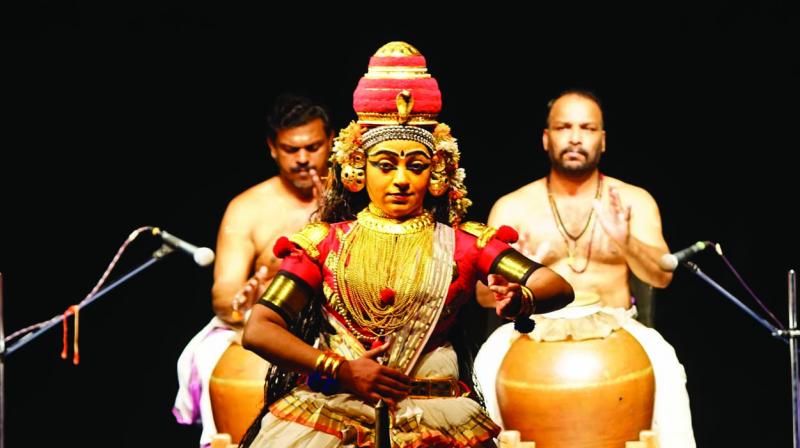 The Sangeet Natak Akademi has held all-encompassing multi- genre festivals over the last year in the different corners of India; last month their Sreshtha Bharat Sanskriti Samagam was held in Thanjavur. The festival presented discussions on classical and dance traditions of the North and South, folk, tribal and puppet traditions from all over India, and theatre. Since the National School of Drama has been formed to deal with all matters of theatre, perhaps the SNA in the future could divest itself of the promotion of theatre.

The five-day festival was packed with activity — the morning sessions being devoted to discussions, followed by performances in the evening. The first day was devoted to classical music, North and South, with talks by doyens like Chitravina Ravikiran, Kaivalya Kumar, and Lalgudi G.J.R. Krishna amongst others. The evening included a concert by Dharwar vocalist Venkatesh Kumar and Carnatic violin recital by M. Chandrasekharan.

The next day was dedicated to the folk and tribal tradition; the talk on Harikatha by Mumbai-based author Indumati Raman whose book, Bhagavata Mela, took her 10 years to write was fascinating. The 500-year-old tradition in the village of Melattur is practiced with performances annually on Narasimha Jayanti in April/May when the males of the village foregather to enact the “kathas”. The rest of the year they are engaged in other activities, as the tradition is not self-sustaining, despite involving an intensive training in Carnatic music laya and dance.

The evening’s performance of Harikatha by M.V. Shimhachala Shastry was impressive; it is sad that such a rich tradition with such talented exponents remains with limited exposure. Shastry lamented that that no artist of Harikatha had ever been awarded a Padma award, despite the Telugu tradition dating back to 1864, with founder Narayana Das having written 19 Harikathas. Other performers were Bodo dancers from Assam, and folk dancers of Telangana and Tamil Nadu. Perhaps, in Thanjavur, performances of folk dances of the North or West would have been more of a novelty.

The third day of the festival was devoted to classical dance — the talks in the morning included veteran Bharatnatyam exponent Saroja Vaidyanathan and Kuchipudi dancers Smita Shastri from Gujarat and Vyajanthi Kashi from Bangalore. It was fascinating to hear from Smitaji how she had to understand the Telugu compositions painstakingly before she could render them in dance; a similar exercise is now undertaken by her several students in Ahmedabad who perforce understand Telugu! She described movingly how she had seen the great Yamini Krishnamurthy in a rare Kuchipudi performance and got so mesmerised that she started learning the form, despite all the difficulties. The performances in the evening featured Manipuri by the Jawaharlal Nehru Manipur Dance Academy and Kuttiyatam by the great Kapila Venu. Venu’s performance radiated the concentrated energy she manages to exude with her minimal movements; the music being made only by three drums and the relentless drone of the bell. The last performance was by Kathak
Guru Rajendra Gangani and his disciples. Indeed, it was a riveting evening.

The fourth day was devoted to puppetry and “allied traditions.”  The very articulate Anupama Hoskere from Bengaluru talked about the puppetry tradition of Karnataka that clearly was a highly sophisticated one. Her presentation included slides, too, and was fascinating. Atashi Nanda Goswami spoke of the glove puppet tradition of West Bengal. The other two talks were by theatre experts, which perhaps could have been avoided, as the next day had five talks by experts from the world of theatre.

The evening performance was of silhouette puppetry (also called shadow puppets) of Karnataka; the projection on the big screen making it more contemporary. The theme of the life of Lord Buddha, too, was novel. Prakash Veerana explained that earlier the projection of the puppets was by firelight. Each puppet cost more than `8,000 making new productions a costly venture. The evening ended with a superb play directed by Balwant Thakur from Jammu, “Ghumaayee”. Despite being in Dogri, the play was self-explanatory to the largely Tamil speaking audience, with beautifully authentic Dogri music composed by Suraj Singh. The Raga Pahari-based “khhut paani peena” which was the refrain throughout the play as the story focused on the consequences of a young bride wanting a drink of water, was poignant. The dances were lovely, too; with clever techniques being used to show water, and climbing a mountain.

The concluding day focused on theatre; Deepak Karanjikar’s brief history of the Marathi Natya sangeet theatre tradition particularly relevant in Thanjavur as apparently it originated there under the Marathi rulers. The concluding evening featured a Sanskrit play “Karnabharam” by Bhasa.

Vice-chairman of the Sangeet Natak Akademi, Aruna Sairam summed up the festival as bringing to the fore “the common thread that runs between all of us, whether in Uttar Pradesh or Kerala. These deeply imbedded impulses are in our very genes, even when we are not aware of them. Each of the art forms (classical folk tribal theatre or puppetry) that were discussed, go back to the same core values, in each tradition. The stories we enact remain constant, even if they are re invented in new forms by new artists; they build our character and unite as one cultural unit. Every section of society in the past was respected; I recall the stories my Guru T. Brinda used to tell me in the Devadasi tradition; of how, unless the Devadasi danced in front of the Utsava murti the procession would not start; her presence and blessings were essential. These traditions find an echo is other regional traditions. No matter how modern we get, these ancient values remain with us”.