Thespo has been an regular ‘importer’ of talent from around the world. 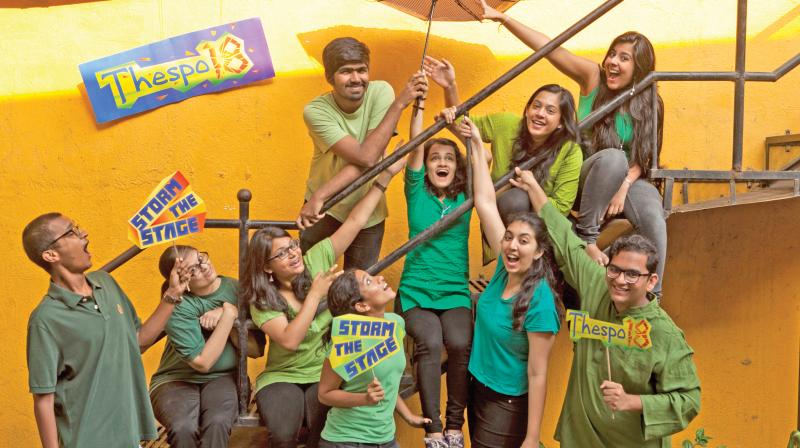 This is the eighteenth festival being conducted by Thespo, the youth theatre movement for and by under-25-year-olds.

Our customary two weeks of cold weather is upon us. And the way to tell locals from tourists in Bombay, is based on who is wearing woollens. The difference is further exaggerated because the tourists are the ones still roaming around in shorts and vests.

However, this year it appears that many of these foreign visitors aren’t tourists at all, but theatre makers who have come to build shows with Indian companies.

Glenn Hayden from Australia has been in the city for the better part of three months. He worked with Peas & Carrots to create the terrifying Ruby Moon. Paul Goodwin from the UK used a mixed cast of British and Indian actors to premiere his Lucrece at the NCPA’s Centrestage Festival. Renato Rocha from Brazil has just arrived to build a short play with a collection of actors for youth theatre festival Thespo 19.

In fact, Thespo has been an regular “importer” of talent from around the world. Glenn, Paul and Renato’s first Indian interactions were via similar projects for Thespo. Having enjoyed working in the country, they have returned with follow-up projects. The Thespo model enables international practitioners to work in a concentrated way for a short period of time. This allows them to decide the kind of collaborations they want to build in subsequent visits. Jo Tyabji came to Thespo in 2008 and has returned from the UK multiple times with various arts projects; the most recent of which was a commissioning of ten minute pieces about LGTBQ themes. Two years ago Italian Daniele Bartollini from created The Stranger, which then inspired him to build a similar audience specific show in Delhi; and another one that although based in Toronto, had an actor participating while in Versova in Bombay.

This year’s international section at Thespo is equally exciting and unique. Workshop leaders from Scotland, Greece, Brazil and the US make the mix quite a treat. In addition to building his show, Renato is also conducting a workshop inspired by his very successful project for the London International Festival of Theatre. The workshop looks at how to devise work and the tools at ones disposal.

As almost an extension of this is American Matt Wasser’s two day workshop on exploring multimedia usage in theatre. Indian theatre has traditionally been people centric and technology shy. Mainly due to the reliability of the equipment available and that Sword of Damocles – COST. However with the latest advances in technology, complicated tasks like projection mapping and interactive softwares are now finally affordable enough for theatre makers to take advantage of.

At the other end of the spectrum is Scotland’s Junction 25, who has sent Jess Thorpe and Tashi Gore to take participants through finding out where a story comes from. Often young people need access to libraries (real or virtual)) for material upon which to base their plays. But since we live in the age of the ME-llenials, maybe that’s where storytelling should start.

Hippo Theatre is here to prove that Greek Theatre didn’t end with Aristotelian Drama. Rather that it’s alive, kicking, thriving, and most importantly innovating. Therefore it will be interesting to be exposed to contemporary Greek theatre making processes. They are conducting a session on Kinemo, a style that explores emotions through physical theatre. Given that recently the Bombay stages have been flush with ‘movement theatre’ pieces, this workshop is very timely. Hippo will also be conducting a workshop for children to help them expand their understanding of both theatre and emotions.

There is more international interest in our nation than ever before. And as companies bid on how to sell us weapons, or mine our resources, or package our water, or sign up to play in the IPL, it’s heartening to know that there is genuine interest and curiosity among artists to share, to create, and most of all to play.

For more info on the Thespo workshops log on to: www.thespo.org/thespo-19/workshops