Street theatre was a fascinating part of the Tamil acting tradition. It is now in serious decline and needs to spread awareness for a grand revival. 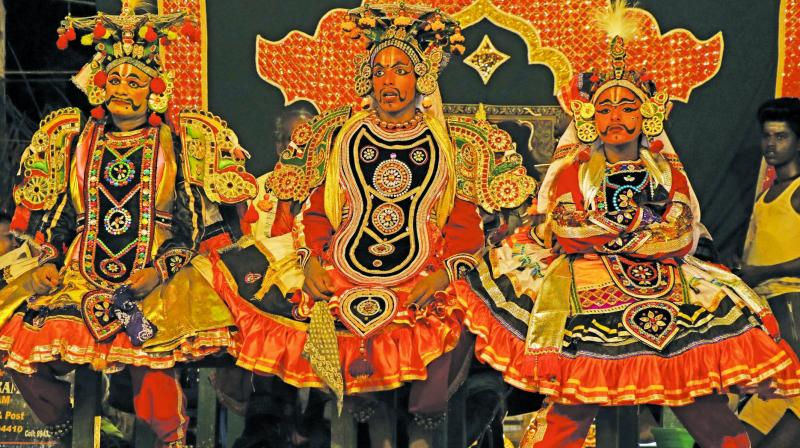 Therukoothu (Street play) was one such ethnic folk art indigenous to India.

There have been leading film actors like Vijay Sethupathi who were once a part of Therukoothu before entering the film industry. Therukoothu is the traditional art of staging street plays that reached its peak quite a while ago. Today, in most regions of the world, many forms of folk art are no more a part of the ethnic tradition of the people and  present generations are not aware of those forms of folk art. Therukoothu (Street play) was one such ethnic folk art indigenous to India. It is now virtually a dying art form. This is because of the popularity of cinema and other forms of entertainment.

"Today we present up to 100 performances every year. In a day we can earn Rs1,000 or maybe even less depending on the audience. But we are more importantly concerned about the response from the public after they watch our performance," he added. "In today's generation, there is music that is available and which is played as a piece of background music. But in earlier times that wasn't the case. Each artiste had to sing while performing his role which was very difficult. But even now we follow the same tradition and with only a few musical instruments like kanjira and harmonium," says Rajan.

It was unique in the olden days that all Therukoothu artistes were males and even the female characters were performed by males, except in a few instances. Most of the stories enacted were mythological stories already familiar to the villagers. The themes are usually drawn from Mahabharata.

"Therukoothu is not getting extinct. I personally feel that it is just changing forms. City people don't have time in their busy lifestyle" says Sugitha, former theatre artist. "People are going for things that are less time consuming and more sophisticated" added Sugitha.

Students and activists have also started to perform Therukoothu based on themes that create social awareness and which are easily understood by the public. This act is purely based on society's welfare.

Sugumar, research scholar at the department of Performing Arts and a Therukoothu artiste says, "The reason why the traditional Therukoothu artist do not go to any other place apart from their villages is that their performances are usually within the villages of Tamil Nadu".

Sugumar is planning to bring a modern theatre form by which the other state people will also have a clear idea of what Therukoothu is all about.

Theru koothu is generally performed late at night after 10 p.m. till about 5 a.m. Around 12 - 14 people are part of a troupe. Theru koothu artistes were treated with great respect for their talent and artistry a century ago. They were invited by the village elders for entertaining the village people. Through their performance, people learned about their history and the culture of Tamil Nadu. This form was very easy and useful for them to learn. The performers wore large, voluminous and bright colour dresses. The dresses are decorated with designs, beads and artificial ornaments. All performers appeared with heavy, dazzling makeup. The dance, songs, music, story and dialogue are delivered orally and not scribbled down on paper. This is one of the special features of the Therukoothu artistes. More awareness may be needed among the people to preserve Therukoothu as a living art form.