He got several prestigious awards from the government of India as well as renowned cultural organisations. 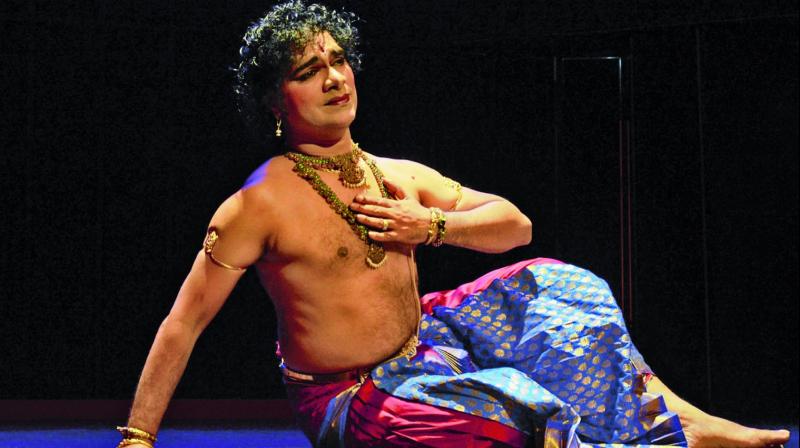 But there is one superbly talented man who proves that this jaadoo nagari belief is totally wrong.

What is gripping about Dr Ratheesh Babu’s personality is his humility, he is one dancer who is not affected at all by all the awards and the praise that he has received for his creative work. This humbleness makes him a very special man, and it is apparent from the respect and love he gets from all his students and fans.

It is believed that to be successful in the field of art especially dance one has to live in a metro city. It is believed that Delhi is the central point for classical dancers, as most of the big names in the classical world live in Delhi. Next in line are cities like Mumbai, Calcutta, Bangalore and Chennai that is because many renowned institutes are located in these art-loving cities. So this belief is very popular among the dancers that to achieve the pinnacle of success one needs to make these jadoo nagari (magical cities) their home.

But there is one superbly talented man who proves that this jaadoo nagari belief is totally wrong. Let me introduce to you my dear friend, a Bharatnatyam and Kuchipudi exponent Dr G. Ratheesh Babu, who lives in a small town called Bhilai in Chhattisgarh, but has made his gurus proud by performing at almost all the prestigious dance festivals of India and at the same time has kept the Tri Colour flying high by showcasing his talent all over the world through his shows and workshops.

I met Ratheesh Babu at a dance show few years back and in spite of being from different dance backgrounds we instantly connected as people and I started to follow the illustrate work of this brilliant artist. What is gripping about Dr Babu’s personality is his humility, he is one dancer who is not affected at all by all the awards and praises that he has received for his creative work. This humbleness makes him a very special man and it is apparent from the respect and love he gets from all his students and fans.

This dynamic artist has a host of achievements to his credit. He holds the prestigious titles of Natya Choodamani and Nritya Kala Bharathi so actually the right way to address a scholar like him would be to call him Natya Choodamani Nritya Kala Bharathi. Shri G. Ratheesh Babu. He is a disciple of Kalaimamani Padmashri Adayar K. Laxman and his name appears in one of the highly acclaimed and renowned dancers of India, he continues to be totally involved in the art of dance both as a teacher and a performer.

Ratheesh was introduced to the world of Indian Classical Dance at the age of five under the tutelage of Guru Kalanilayam Krishnan Kutty from Kerala and he learned his first steps in Mohiniattam. Then he moved ahead and learned the intricacies of Bharatnatyam and Kuchippudi dance form under the able guidance of Ms Amritam Gopinath, Aryakalanilayam and Ms Barnona Basu from Mumbai. Later, he moved to Chennai to specialise in Bharatnatyam under the guidance of Kalaimamani Padmashri Shri Adayar K. Laxman. He also learn the details and complexities of Carnatic Music under the guidance of Shree Trissur T. Unnikrishnan, IKSV, Khairagarh.

After taking blessing of his Gurus he used gift of dance and displayed his immense talent by performing in all major sabhas and festivals in India and abroad. He is an amazingly graceful and gifted dancer, a classicist in the field of Bharatnatyam, Kuchipudi and Mohiniattam as a dancer, teacher and choreographer. He is the Founder Director of “Nrithyathi Kalakshetram” - School of Indian Classical Dance which is Affiliated to Indira Kala Sangeet Vishwavidyalaya; Khairagarh - C.G. having national repute.

For sheer geometry of lines and precise structure of form, he has stretched his capacity for perfection to its utmost. By his astounding and exquisite dance, he dazed the audience in India and Abroad. His versatile talent and gracious inner artistic beauty won wide acclaim from art lovers, connoisseurs and natyaacharyas.

He got several prestigious awards from the government of India as well as renowned cultural organisations. Till date Ratheesh Babu has staged approximately 1,300 shows, both solo and group dances. He also conducted workshops and has Imparted training through Nrithyathi’s Learning Centers located at Raipur, Bhilai, Durg, Nagpur, Bhopal, Pune, Kannur, Vizag, Bangalore and many more cities in India.

Not just the awards but he has also been honoured with two doctorates in the field of Indian Classical Dance, by University of Global Peace (USA) & Royal Academy of Peace (UK) and the prestigious Guru Samman — Life Time Achievement Award by Sanskar Bharati.

I am sure you must be wondering and that after travelling and performing all over the world why Dr Babu does not live in Delhi or Mumbai or settle abroad may be. “I developed by art of teaching dance in Bhilai, so my heart remains here, apart from that Bhilai is like mini India, you will find people of all cast, religion and community here and I am a true India at heart and in spirit. I travel all over India and the world but peace and contentment I get in Bhilai,” he says.

Dr Babu doesn’t just believe in teaching and performing but he also in giving back to the community and provide a platform for other dancers. For this he organises major national level cultural events every year, like: Natvar Gopikrishna national award function, Samanwayam Festival in collaboration with Indian Dance Ally, Nritha Nrithyathi — a festival of Indian classical dances, Impulse: Desire to Dance, Param: all india classical solo dance competition and Natyanjali — a mahashivaratri festival of dance etc. To encourage the kids he arranges Nrithya Basant, an international spring festival and Bala Nritya Kalotsava, a festival for the artists below the age of 14 years.

This highly elegant and gifted artist believes that it is not the city but your art and love for the art that makes you spread the essence of your talent. If you have the blessings of your elders and Gurus, fire in your belly, conviction to prove your talent and belief in oneself and in God then nothing is impossible and “that what makes me unstoppable” he says.

The writer is a World Book Record holder, a well known ballroom dancer and a Bollywood choreographer who has been honoured with two national excellence awards and one national achievement award by the government of India. He can be contacted on sandipsoparrkar06@gmail.com