It was interesting to note Carnatic vocalist and Padma Bhushan Sudha Raghunathan present a completely different approach to her music. 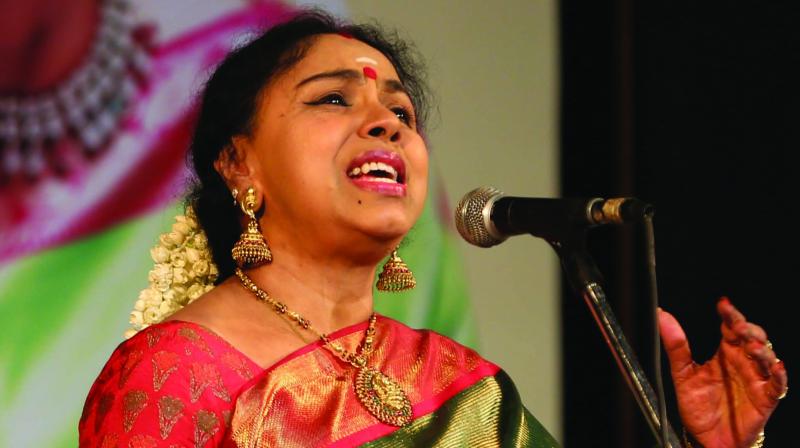 Padma Bhushan Sudha Raghunathan is amongst the foremost Carnatic vocalists today with a huge fan following; she also happens to be easy going and easy to interact with.

Completely informal, very articulate, Sudha is comfortable in her skin and open to criticism about her art form; open to appreciate another perspective. Surprisingly, after a very successful concert at the India Habitat Centre's Morning Raga series, Sudha sang to a completely different audience just a week later in the Capital, to thunderous acclaim.

It was interesting to note the completely different approach to her music at each concert - her attention to choosing the appropriate item from her vast repertoire was laudable. Years of practice under the guidance of one of the foremost vocalists of her time, the iconic Smt M L Vasanth kumari have left their indelible mark on Sudha Raghunathan, with her unmistakable, beautiful bell like extremely polished and honed voice.

Chatting after the concert with the affable, vibrantly gregarious Sudha was a pleasure. Some excerpts:

“With all of us as a nation focused on Wing Commander Abhinandan's return recently, I asked which Ragas she felt embodied ‘Veer Rasa’ (each Raga is said to have one dominant emotion, out of the 9 ‘Rasas’ or 9 emotions,” Sudha replied. “Raga Atana I feel is associated with Veer Rasa, as is Raga Begada.

But even if the lyrics of a composition talk of valour, the way of presenting it becomes filled with Veer Rasa, like Muthuswamy Dikshitar's Veer Hanumat. When I sang ‘Jai Jai’ in Raga Nattai, at the Habitat morning concert, which is a composition of victory for Lord Rama, I wanted to announce I am dedicating it to Abhinandan but then I thought it would sound very melodramatic, so I didn't verbalise it. But he was in my mind while I sung it.

I have not been given an opportunity to perform for the forces, to try to thank them through music, which is all I can do as an artist, but I would love to. I think they should know that we want to reach out to them.

When I formed my trust Samudhaaya, the first money my friends and I raised, Rs 5 lakh, was given to the widows of Kargil. In fact I would say, I was inspired to form a trust to raise money for philanthropic purposes because of the forces so I am grateful to them for that!”

Admitting that constant travel takes its toll on an artist, Sudha shared “I would love to come an extra day and see the city I perform in. It's quite frustrating to land in a city and be asked, would you like to see such and such and I have to say no, I have a concert this evening. You feel trapped in a way. I have never been to Jaipur Jodhpur or Udaipur and I would love to, to see the cities and sing. Another thing is sometimes when flights get delayed, one has to rush to get ready for the concert, so there is a fair amount of stress involved.

I wish we could avoid that but sometimes it's not physically possible to have an extra day before the concert.”

Sharing that Delhi was amongst her favourite cities to perform in, Sudha said, “Delhi audiences are quite important, I would say after Chennai, Delhi and Mumbai have rapt listeners. In Delhi I try to confine myself to Ragas that a more predominantly North Indian music listener would be familiar with.”

Sudha continued: “In Delhi I love the straight roads with the roundabouts.

The greenery is so abundant; the weather is so good plus you have the water. In Chennai we lost so many trees in the 2 cyclones we had; even if we plant the trees now, it will take 20 years for them to flower. I also love the rotis and paneer in Delhi, though I would'nt say I am a foodie really; I barely finish a dish I order.”

I asked about the physical strain involved in a concert, apart from the strain of travel. Sudha shared "Singing on stage is not just about the singing, it's sitting stiffly for so long, being aware of your neck movements because of the mic.

Voice is produced by the body, so the body too has to be flexible and pliable. Breathing too is important; if you put on weight around the middle it's more difficult to hold those long notes. One can achieve a meditative state through holding long notes. Yoga and daily Surya namaskars help a lot.”

In conclusion, I asked the doyen what she would like to now achieve through music. Sudha explained “I would love to collaborate with psychiatrics, psycho therapists to do research to see the effects of music on the mind,” she said adding,

“I see our younger generation is more troubled by the mind, by stress than by actual physical problems.

I feel music can help. Mind is the fulcrum. Certain Ragas can help in alleviating stress, mitigating pain, dealing with insomnia. Someone has to physically try out music therapy and collate the effects.

I would love to do something in this field.

Pregnant mothers should also listen to music so that the child absorbs and grows up at the very least being receptive, if not actually becoming a musical prodigy.”

Inspiring words from an inspired singer!