Hailing from France, India is Annette’s source of inspiration and a second home for over three decades. 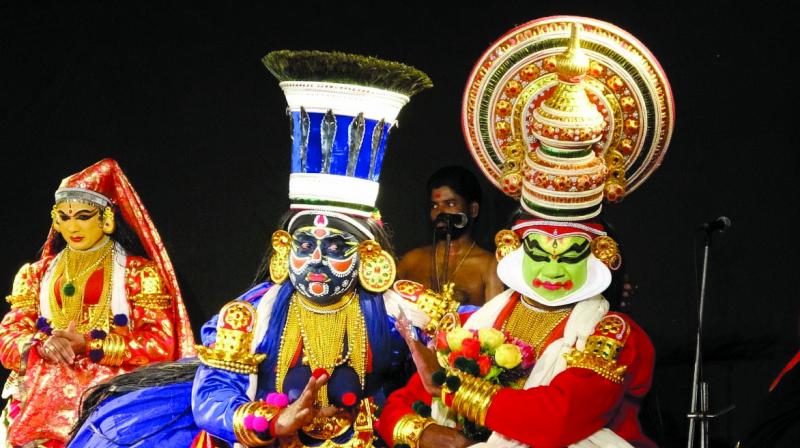 Staged for the first time in 1989, Kathakali–King Lear was then translated by Malayali poet Marumakan Raja, and has since then been performed multiple times around the world.

Over the centuries, William Shakespeare’s play King Lear has earned itself multiple adaptations and has travelled across the globe for wider interpretations by various directors and playwrights. This time in the hands of French dancer and choreographer Annette Leday and Melbourne-born playwright David McRuvie, this classic Shakespearean tragedy is breathing a new life with cross border experimentation as the ‘laureate meets Kathakali’. Staged for the first time in 1989, ‘Kathakali –King Lear, was then translated by Malayali poet Marumakan Raja, and has since then been performed multiple times around the world, the most recent of which will be staged at The Royal Opera House tomorrow.

Adapting Shakespearean play into Kathakali – a dance form entailing complex gestural language, traditional song and music, elaborate make up and extravagant costumes, Annette’s Kathakali – King Lear is an outcome of her extensive study of the dance in Kerala. With this production, the director is giving a new language to Shakespeare’s King Lear though combining the two different art forms – Indian folk dance theatre and Elizabethan Theatre, has similar problems and opportunities as adapting a play for ballet or for opera, “there will be loss and gain, and the key is to chose the right play,” says Annette. According to the director, King Lear is very suited to Kathakali. Unlike other plays, King Lear has two parallel stories – the king and three daughters and the theme revolves around kingship, dowry, love story, renunciation of the world, war – which are also central themes of Kathakali. “Unlike other tragedies, King Lear is based on an older English theatrical tradition of character-types and so as Kathakali,” explains the director.

On exploring a new territory in Kathakali while keeping the traditions and spirit of the form alive, Annette explains how she retained the originality of Indian dance theatre by replacing two similar character from both the scripts, such as King’s fool with Vidushaka of Sanskrit theatre. “Both the scriptures have similar characters but need a careful thought,” she confirms. However, when asked if the dance form that is mainly combined with a source of joy, could do justice to Shakespeare’s tragedy she denies the popular notion saying, “Kathakali can express any mood, tragic or joyful.” Adding that to the storytelling happens by combining the whole technique of Kathakali with dance, body language, hand gestures and mudras.

Hailing from France, India is Annette’s source of inspiration and a second home for over three decades. For her, working with Kathakali artists has been extremely fulfilling journey in artistic as well as human terms. “I have been a witness of their lives and of their evolution as performers, It’s a beautiful love story,” she smiles. The choreographer also confirms that the nine-act performance of Kathakali-King Lear is stretched over 105 minutes where in a group of 10 artists have rehearsed for three weeks in Kerala.