The dacoit of the art world

Delhi’s famous and often controversial, anonymous street art artist, Daku, is in Hyderabad to give hoardings an art twist. 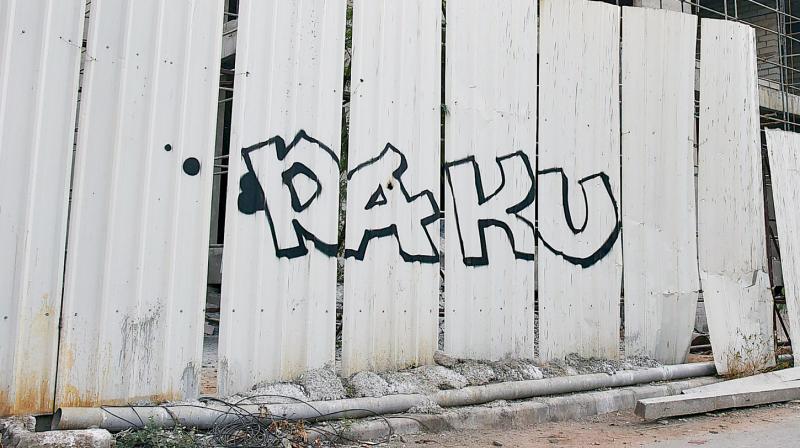 Famed street graffiti artist Daku marked his presence in the city with his signature, at a construction site in Banjara Hills.

With a name like Daku, it is easy to imagine someone with a voice as heavy as the name, but the famous anonymous-artist from Delhi is really just like any other guy.

Despite the secrecy, there are people who know his real identity. “It’s just not something that many know. People from the graffiti background, art world and a few journalists know me,” says Daku who is currently in the city for the St+Art Hyd festival.

So far Daku has done several artworks in Delhi alone and his works have spread across the country too.

Masked artist
The curiosity behind his identity is huge, but why did he even think of creating this anonymous identity? “I never grew up dreaming of becoming this anonymous artist. But when one does graffiti they go with a tag name and Daku was something that struck me and so I stuck with it. Also, being anonymous gives me great freedom and even lets me work in peace,” he explains.

Living two lives
For someone who lives an adrenaline-filled life like that of Daku, his real self, he says is like anyone else. “Daku and the real me are very different and that’s an advantage. I’m just another artist and an ex-ad guy,” he explains.

“When I am Daku, it is a very different feeling. Here I am not answerable to anyone, I do whatever I want to, but well within my limits... the Daku in me is also responsible,” he says.

Worked for actors
Reports that Daku worked on Hrithik’s room did the rounds and he confirms that. “Yes I did work on that room, in fact I also worked for Katrina and Ranbir,” he says before quickly changing the topic.

Not bothered much about getting caught
For someone whose work could get him into trouble (for instance his work in Mumbai where he stenciled F**k on the wall in protest against Vasant Dhoble, the assistant commissioner of police who was accused of moral policing) Daku is rather chilled about the authorities catching up with him. “This really doesn’t bother me,” he says.

Not the Banksy of India
A lot of of comparisons have been drawn between Daku and Banksy, the uber famous graffiti artist who much like Daku is anonymous too.

But Daku says, “Not many people know about street art, so when they look it up online, the first thing that hits them is Banksy, so their lack of knowledge is forgiven,” he explains.

Art in Hyderabad
Hyderabad is famous for its hoardings and that’s where Daku comes in. Titled Artvertising, it is a take on the consumerism. “I’m not against hoardings, in fact I feel that it is part and parcel of the city’s life and also adds to the identity of Hyderabad. Here we’re planning to make some hoardings here, but we’re using the same medium and seeing what we can do with art.”