Shankar as an unsure, nervous teacher does well to show the conversation one has with oneself. 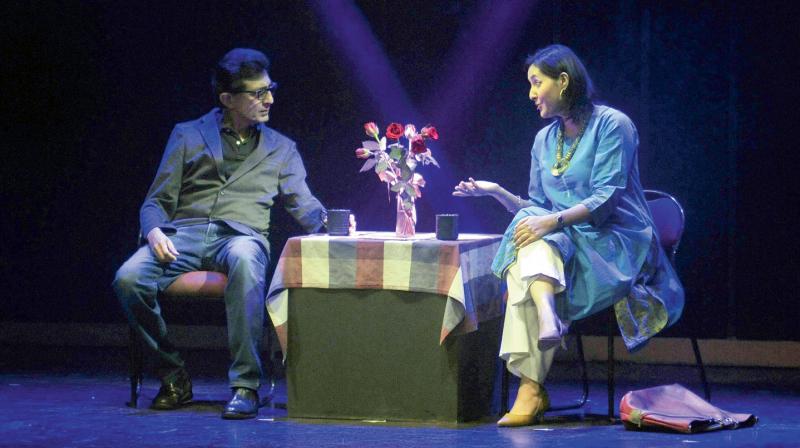 Delhiites experienced a myriad range of emotions on Sunday as actors Tom Alter, Sunit Tandon and Charu Shankar took to the stage to enact Miran Productions’ Once Upon a Time at the India Habitat Centre to a full house.

Directed by Sujata Soni Bali, Once Upon a Time is a play in Hinglish that tells five short stories, episodically. Each story stands out from the other, and yet they are all connected. Written by different authors, no two stories share the same setting, tone or narration.

In Sharifan, by Sa’adat Hasan Manto, Tom Alter narrates a story of vengeance. It is clear that something sinister is afoot when he talks about a father’s angst on seeing his daughter Sharifan’s dull, lifeless, naked body after she was raped amidst a communal flare up. “Maar dalunga!” The narrator intonates the father’s blood-curdling cry as he sets out to avenge his daughter’s rape, a scythe in hand. Eventually, he chances upon a door, breaks it down and rapes 14-year-old Bimla, who inhabits the house. On regaining his senses, he realises that the girl is dead. When Bimla’s father sees her lifeless body, he bawls and cries, only to pick up the scythe and embark on his own revenge, demonstrating the meaningless yet vicious circle of violence.

Alter’s body language is tense with toes pointed as he sits narrating the story. He moves slowly across the stage, internalising the character and the pain and grief he feels as Sharifan’s father. His powerful monologue, and repetition of words while he describes the body of his daughter Sharifan, immediately show the audience the spectre of violence and mayhem where emotion rules and reason and rationale are mute spectators, just as Alter does when he watches Tandon mourn the death of his daughter. Tandon, as the father of the Hindu girl, is very effective. His 10-second performance of expressing shock and then gathering himself to avenge with bloodshot eyes is scary.

As one reflects on the first story, two schoolchildren playing in a classroom appear in the aisle, next to the audience, communicating in signs, transporting us to the second story adapted from Sutapa Basu’s Classroom Wiles, about an English teacher’s first day at a school.

Shankar as an unsure, nervous teacher does well to show the conversation one has with oneself. She constantly talks to herself, expressing doubt and then reassuring herself by remembering that she was a topper and doesn’t need to worry. More than the story, it is Shankar who drives the segment with her performance. Her expressions are more articulate than words. Also, the background music helps her as she goes into the world of literature, making a rowdy bunch of students go quiet and then fall asleep. It’s a hilarious and breezy story.

From the classroom, the third segment takes us to the story of a father’s last letter to his daughter. The Last Letter by Dipanker Mukherjee keeps us suspended in a different emotional space. Initially, it seems the father is writing to his daughter as he nears the end of his life. But the father has to take the most difficult decision of his life — to allow doctors to remove his 10-year-old daughter from life support. As the brooding, doting father, Tandon recounts how Xenia, who was so full of zest, wore a blue dress for her ninth birthday. He broods over how he was late for the party and how Xenia impatiently ran towards him as soon as she saw him, and got hit by a speeding car. The father talks about his child’s drawings, her crooked art strokes and in a poignant request asks Xenia to draw a crooked line on the life support monitor, and give him hope.

As the lights fade out, the next story begins. Twinkle Pandey’s Twenty Questions is an amusing story about a boy and a girl meeting for an arranged marriage. The questions they ask each other and the asides attached to their responses sent the audience into peels of laughter. Starting with cliched questions like what they like to read, what kind of music they listen to and eventually arriving at the conclusion that the two have nothing in common, the protagonists played by Tandon and Shankar give into the cliche of “opposites attract”. This one was a sweet, light-hearted act where Shankar’s performance as a psychiatrist is charming. I was floored by her vivaciousness without which the act could have been dull. 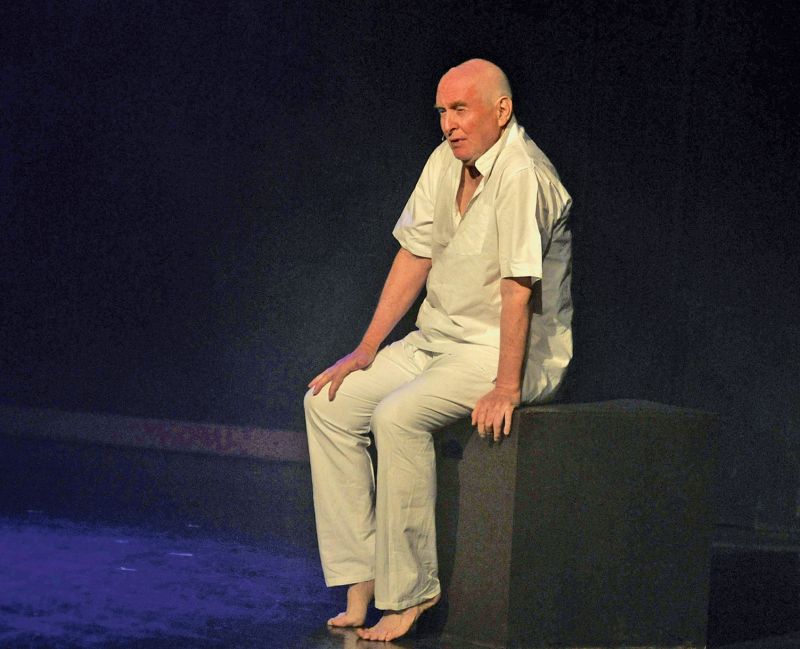 The last story, Ek Lamha, written and enacted by Alter, based on a real-life incident, is about a poet struggling with writer’s block and how he overcomes it, by finding his muse amidst the bustle of highway traffic, standing on the 10th floor balcony of a high-rise. Alam saab (played by Alter) laments, “Shayari bhi kya khoob cheez hai...” as he watches the car keys tinkling in his driver’s hand, who dressed in white, appears like a ghostly apparition to the writer. Alam saab asks the driver to take him to a new place, to take his mind off things which could maybe help him start his writing afresh.

While sitting in the car, Alam saab encounters his muse clothed in “lal, kala aur safed”, fresh out of a bath, to dry her hair in the balcony. The vision inspires Alam to get back to his writing table, stick to it for four days. Yet the author just can’t seem to get it right. Stuck again, for want of the perfect expression, Alam goes out on another drive. This time the driver, knowing what would interest his patron, passes by the same building. And on a lark the author decides to call on his muse. What ensues is a moment of serendipity that leaves the writer and the audience bemused.

Alter’s chaste Urdu makes him the perfect fit for the role of an impetuous writer-lover. He depicts the anxiety and restlessness of a poet so well that one’s heart reaches out to him.

Alter and Tandon bring in their experience while Shankar’s presence lights up the stage. I would definitely like to watch her more.

The five stories rendered the audience numb and made them laugh in alternation. The stories are deliberately left open-ended, to engage the audience and force them to think. Likewise, I found myself swinging between extreme emotions of despair, anger and sorrow on the one hand, and laughter and amusement on the other.

The fact that there were no breaks between the acts also help set the pace of the one-hour play. While the stories were short, they are rich and intense. The ensemble of stories in Once Upon a Time deal with unqualified rage, nervousness, rib-tickling humour, the pain of loss and the thrill of finding inspiration in the most unexpected places, without passing a judgment.

The audience decide for themselves.