Q&A: Can a museum sell its art to stay in business?

The auction of the first seven of the 40 works, including the Rockwell pieces, was scheduled for November 13. 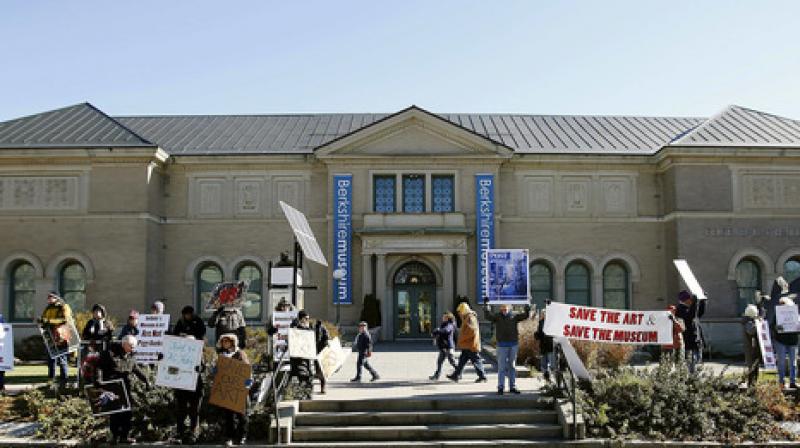 In simple terms, the Pittsfield museum says it needs to sell the art for its very survival. (Photo: AP)

The intensifying legal tussle over whether a struggling Massachusetts museum should be allowed to auction 40 works of art, including two by Norman Rockwell, has raised questions about when — if ever — it’s appropriate to unload the collection.

A look at the arguments for and against, and why the case against the Berkshire Museum has aroused such anger:

WHY IS THE MUSEUM SELLING THE ART?

In simple terms, the Pittsfield museum says it needs to sell the art for its very survival.

The museum, founded in 1903, says it has been running an operating deficit that in the past 10 years has averaged more than $1 million annually, and will close within eight years without an infusion of cash. If it closes, all the art will be lost, museum officials have argued.

The art sale “would allow us to protect our most important asset: our open doors,” Elizabeth McGraw, president of the museum’s board of trustees, wrote in an op-ed piece in The Berkshire Eagle.

The goal of the auction is to raise $50 to $60 million to boost the endowment by about $40 million and fund renovations. The museum is pivoting away from art and more toward natural history and science to fill a currently empty niche in a region known for its world-class museums and cultural institutions.

WHAT ARE THE OBJECTIONS?

The decision to sell the art , announced publicly in July, was made after two years of meetings. It drew immediate condemnation from national museum groups as well as area residents who said selling the collection to pay the bills violates a cardinal rule of museums.

The sale of the two Rockwell pieces struck a nerve because the famed illustrator lived in nearby Stockbridge for the last 25 years of his life and gave the oil paintings to the museum as gifts. One of them, “Shuffleton’s Barbershop,” could fetch as much as $30 million at auction.

Opponents of the sale say the museum’s contentions about its dire financial condition are vastly overstated.

A Williams College economist who looked at the museum’s finances determined that all it needs is an infusion of about $11 million to its current $8 million endowment to operate in the black, according to Michael Keating, a lawyer for several parties — including Rockwell’s three sons — who went to court to block the sale.

The museum has consistently stood behind its financial assertions.

WHAT IS THE LEGAL BATTLE ABOUT?

The auction of the first seven of the 40 works, including the Rockwell pieces, was scheduled for November 13.

But Rockwell’s sons and others went to court in October to halt the sale . The Rockwell pieces were gifts to the museum from Rockwell himself, made with the understanding that they would be kept as part of the museum’s permanent collection, Keating said. Many of the other pieces on the auction block came to the Berkshire Museum from the now defunct Berkshire Athenaeum and are subject to a state law that said they should not be taken out of Pittsfield.

Although the Superior Court judge denied that request to halt the sale, the attorney general’s office, which has jurisdiction over public charitable trusts including museums, asked for and received from the state Appeals Court an injunction to allow for the completion of an investigation into whether the sale is legal.

That injunction was supposed to expire Monday but the attorney general’s office has asked for an extension until Jan. 29. The judge did not immediately rule pending a response from the museum’s lawyers due Tuesday.

Museum officials and trustees repeatedly have said there are no legal barriers to the auction.

William Lee, a lawyer for the museum, has asked for an expedited trial due to the institution’s “precarious financial position.”

But the endgame for the legal wrangling could be months away. Ultimately, it could be decided by the Supreme Judicial Court, the state’s highest court.