The three key challenges for Siddhanth has always been, as he puts it in alphabetical order, ABC – awareness, budget and charity. 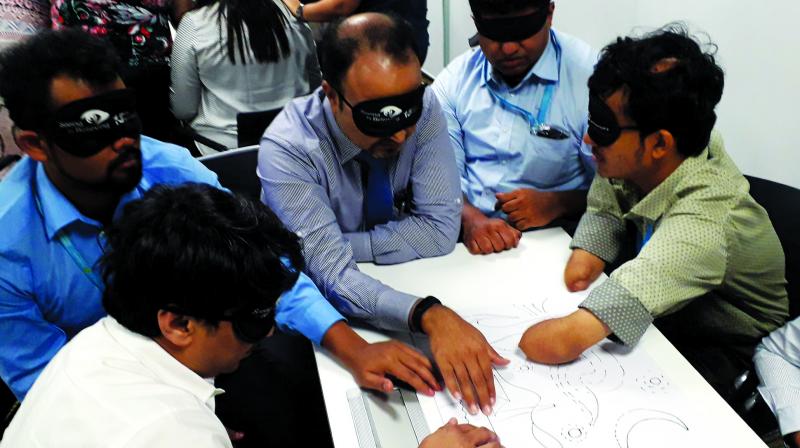 People with and without special needs experiencing a tactile art with blindfolds on as part of disability awareness session conducted by Access For All for Standard Chartered bank.

In 2015, heritage architect Siddhant Shah founded Access for All in Mumbai to push the boundaries of accessibility for the visually impaired and enable them to experience our rich histories and cultures with the help of innovative designs, sensitization workshops and advocacy. It all started in Greece, a place he says, where you throw a stone and it hits a monument. He borrowed the idea of inclusivity from there and brought it back home to India, “The idea of accessibility there is not like  the one in India where facilities are created in retrospect. There, it is part of their policy itself to create everything inclusive.” It was during his MA in Heritage Management as a Starvos Niarchos Scholar, at the University of Kent in Greece that he visited a tactile museum for the first time in his life.

While museums around the world would greet patrons with the signboard ‘Do not touch’, things were different at the tactile museum in Athens, “The whole museum is dedicated to people with visual impairment. They have replicas of all the key objects around the country where you can actually go and touch and feel these things,” says the bemused architect.

This experience was eye opening for the 27-year-old who was only then able to fathom his partially sighted mother, Anisha Shah’s plight. She lost her vision 15 years ago and things began to deteriorate further after her third eye surgery, Siddhant recalls, “The places she knew, such as her own home suddenly became the most uncomfortable spaces for her.” It was then that he understood what his mother needs and quotes Gandhi to say, “Cultures should strive to be inclusive and not exclusive.” 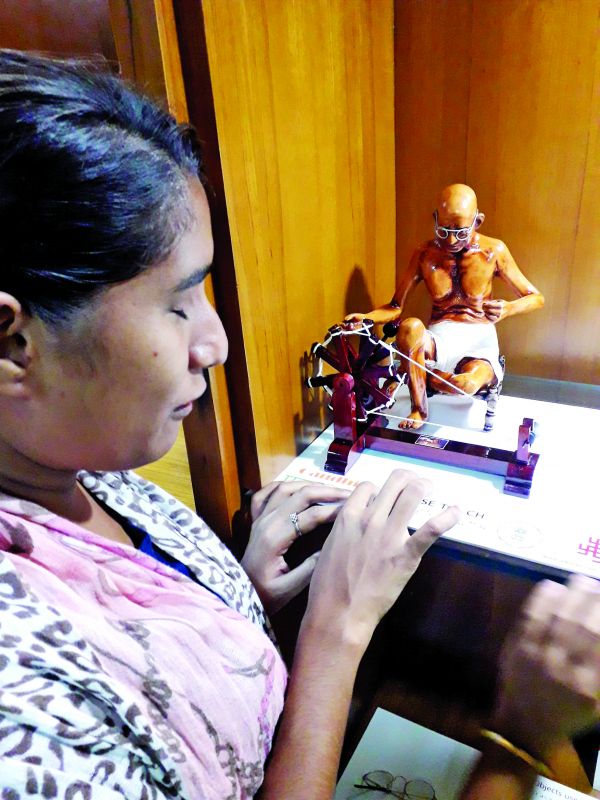 Tactiles for Gandhi exhibition for visually impaired at IGNCA

Subsequently, Siddhant and his group won a competition hosted by UNESCO and the Archaeological Survey of India (ASI), to make world heritage sites in India disabled friendly. But it was only when he got an Ethos scholarship from Saint Gobain, to develop tactile replicas for making cultural heritages accessible, did he realize the shortsightedness of Indians in terms of accessibility. For the project Siddhant had to find a host museum in India to work on, but was met with lukewarm responses, “Funny thing is I had the money, but when I contacted a lot of museums they were like, we are accessible we have a ramp, or asked me why would a blind person want to visit a museum?” That was the time I realized that for Indians accessibility was only physical.”

Finally, after four months the Jaipur palace agreed to collaborate with Siddhant for his project. Even the national museum in Delhi agreed to the idea and was trying to develop the Anubhav gallery, which is a tactile gallery in the National museum, at the time.  “After our Jaipur project, we had a chance to design Pakistan’s first Braille book for the State Bank museum in Karachi.” Besides this, Access For All has also helped make the City Palace and Jawahar Kala Kendra in Jaipur and Serendipity Arts Festival in Goa accessible for all and continues to do so.

The three key challenges for Siddhanth has always been, as he puts it in alphabetical order, ABC – awareness, budget and charity. However, he believes that people are becoming more aware and sensitized towards the blind today, “Even the disabled community is pushing people to do things for them. They are also becoming more aware of their rights,” he says.

Sensitization is the key to build a more inclusive world and Access For All conducts various such sensitization programs in schools and corporates as part of their CSR initiatives. But Siddhant says there is a lot more that needs to be done and in India we are only scratching the surface . Nevertheless he is positive and takes inspiration from his mother who was also an art educator for people with various disabilities, he says, “She would always push for art to become inclusive because art is the most unbiased medium. If you don’t dance well people will judge you, if you don’t sing well people will judge you, but art is the only medium where people won’t  judged you and you can do anything you want.”