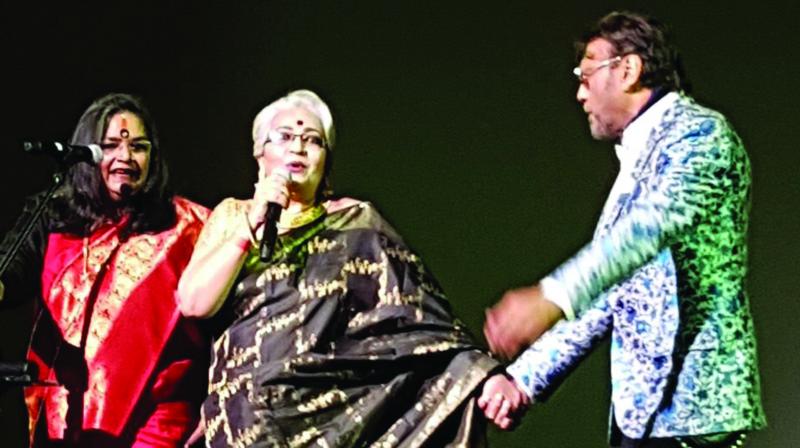 The ever so graceful Kalpanaji danced her legendary hip smacking disco moves while Ushaji sang with full gusto. Jackie Shroff too joined them and made a perfect picture for the paparazzi. Kalpana Iyer is an iconic dancer from Bollywood who inspite of being a classically trained Bharatnatyam dancer danced the disco moves with utmost grace.

Music and dance has been ruling bollywood since the start. Each film that we make is incomplete without its songs and dance routines. Some songs have become iconic and on the other hand some dance moves have been ruling our hearts for decades now. But the synergy of both a hit song and it’s iconic moves is what makes the song a true memorable...

Be it Madhubala, Meena Kumari, Waheeda Rehman, Vaijanthimala, Hema Malini, Helen, Kalpana Iyer, Aruna Irani, Sridevi, Madhuri Dixit, Mallika Arora or even Rakhi Sawant all have given us some evergreen combinations of music with hot and hit moves. Choreographers like we then and now all try their best to set moves to a song hoping that it will become iconic n memorable one day. When Asha Bhosle and diva Rekha come together and sing the songs of Umrao Jaan. All music and Gazal lovers  stand up and salutes the two legends. Same way in 1980’s combination of singer Padmashree Usha Uthup and actress Kalpana Iyer was one that till today makes us all get up and dance. Mesmerising music of Bappi Lahiri was and will always be evergreen. Yes you have guessed it totally right. I am talking about the iconic song and dance Koi Yaha Aha Nache Nache from 1982 Blockbuster film directed by B. Subhash starring Mithun Chakraborty called Disco Dancer. The lyrics was by Farooq Qaiser,  music by Bappi Lahiri, sung by Usha Uthup anddanced by Kalpana Iyer and Karan Razdan.

I also want to bring to light another legendary song was Rambha ho ho samba ho ho” from 1981 film Armaan starring Raj Babbar and Ranjeeta Kaur for which again Bappi Lahiri and Usha Uthup teamed up with lyrics by Indeevar and again moves of sensual Kalpana Iyer and Gorgeous Prema Narayan  made our heart skip a beat. This dance number was shot at the Goa carnival ably choreographed by Vijay Oscar.

You must be wondering why am I talking in particular about these two songs. Well, just a few days back a popular film magazine relaunched itself in Dubai and like as always the event was attended by the who is who from the world of cinema. Ofcourse there was Deepika Padukone looking stunning as always along with handsome Fawad Khan. But what was most memorable about this event was when Usha Uthup started sing a medley of her hit songs. Moving backwards from today’s Time to the golden era.

“Daarling aakho se aakhe chat karne do” a song which I feel humbled to say I choreographed and even got recognition for it at screen awards from Priyanka Chopra starrer film Saat Khoon Maaf directed by award winning director Vishal Bharadvaj set the evening rolling then what followed was magical. When the husky voice of Usha Uthup touched the notes of Rambha ho ho public went crazy. Kalpana Iyer who was in gracefully sitting in the audience, in popular demand was pulled up on stage and like I said rest that followed was magic.

The ever so graceful Kalpanaji danced her legendary hip smacking disco moves while Ushaji sang with full gusto. Jackie Shroff too joined them and made a perfect picture for the paparazzi. Kalpana Iyer is an iconic dancer from Bollywood who inspite of being a classically trained Bharatnatyam dancer danced the disco moves with utmost grace. Her metallic gold and silver shinny costume along with feathers and elaborate make is till today talked about. Her sensual personality suited well with the voice of Usha Uthup, That’s the reason why their combination is a deadly one I feel.

The fire that Kalpanaji’s disco moves and Ushaji’s haunting voice created burnt, yes burnt each guest present there. After a while I spoke to the legendary Kalpana Iyer as to how it was to reignite the Fire. To which teary eyed Kalpana ji replied, “There are not enough words to Explain my feelings. We both were Emotional Tearful and Thrilled. I could have Disco danced all night.”

Talking about the thrilling moments the evergreen Usha Uthup created with Kalpana Iyer, she said, ‘Kalpana  and me go a long way, decades have passed and not really been in touch, but these moments when I sang and Kalpana danced her famous Disco moves will remain with me forever, I can’t thank Kalpana enough for being so spontaneous and bringing alive the old times and I also want to thank filmfare for making it happen for all dance lovers and to Jackie for always being so wonderful.’

Kalpanaji was so overwhelmed that she further added, “Sandip, Usha and me,We both are Connected in Ways that is not easy to explain or understand but it is a beautiful connection and it calls for a big heart to share your space with another and Usha was so very gracious oh my God, I am over the moon even now with Joy because the feedback has been so Warm, so beautiful.”

There are some moments that freeze forever and this indeed was one of them. So all those aspiring bollywood dancers or choreographers out there, please don’t just look at the moves of today’s dancing sensation Tiger Shroff and Shraddha Kapoor and get excited to join Bollywood, but I would suggest look back at the golden era of cinema because that is where our roots are and that is where we all have learnt our craft from. Today through this story I want to thank Usha ji and Kalpana ma’am for taking us back in time and making us relive the days of disco. Because “It’s the time to Disco”

Note of Disco Fashion
Disco fashions were very trendy in the late 1970s and 80’s. Discothèque-goers often wore glamorous, expensive and extravagant fashions for nights out at their local disco club.

Mens Dressing
Men would wear shiny polyester Qiana shirts with colourful patterns and pointy, extra wide collars, preferably open at the chest. They often wore Pierre Cardin suits, three piece suits with a vest and double-knit polyester shirt jackets with matching trousers known as the leisure suit. Men’s leisure suits were typically form-fitted in some parts of the body, such as the waist and bottom, but the lower part of the pants were flared in a bell bottom style, to permit freedom of movement.

Disco Styling Make and Accessories
Women dancers wore glitter makeup, sequins or gold lamé clothing that would shimmer under the lights. Bold colours were popular for both genders. Platform shoes and boots for both genders and high heels for women were popular footwear. Necklaces and medallions were a common fashion accessory. Less commonly, some disco dancers wore outlandish costumes, dressed in drag, covered their bodies with gold or silver paint, or wore very skimpy outfits leaving them nearly nude; these uncommon get-ups were more likely to be seen at invitation-only parties and disco clubs. During the disco era, men engaged in elaborate grooming rituals and spent time choosing fashion clothing, both activities that would have been considered feminine according to the gender stereotypes of the era.