The Amani Project which focuses on inculcating emotional intelligence and empathy in children through music will soon be coming to the city. 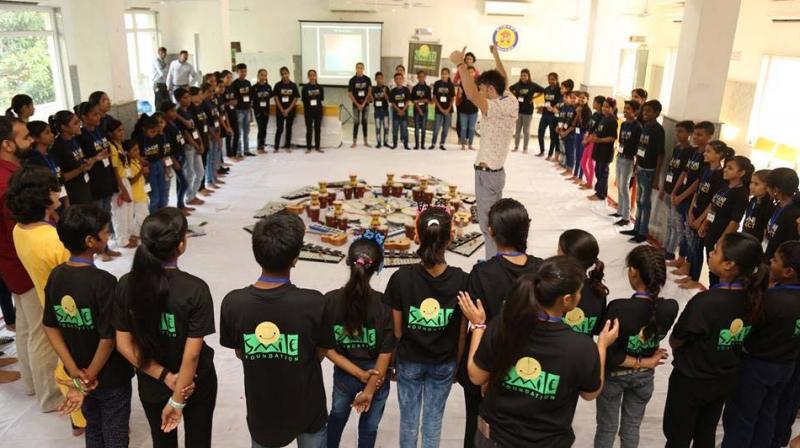 Children during the training under Amani Project

When children are given the chance to make music, they express themselves by creating an emotional common ground with others. Inspired by the magnetic pull of music and the impact it has on people’s lives, Smile Foundation and Children in Harmony have introduced the Amani Project in India. The Amani Project aspires to inculcate emotional intelligence and teach the value of empathy to children through music.

After Amani’s successful venture in the USA, South Africa, Tanzania, and Bagamoyo, it is all set to pave its way in India. Started in October 2018 in Delhi, the project is soon to base its feet in the city. “It combines the learning theory of emotional intelligence through music therapy and music making,” says Gargi Kapoor, the National manager of Mission Education of Smile foundation.

The project focuses on holistic development of the child through music that is designed to proceed in two phases. As Gargi explains, in the initial phase the children learn to understand their moods, emotions and the value of empathy and to make empathy music. “It has various colours and parameters of development and so far children are responding positively,” she says. Adding that it also teaches them to understand others’ emotions and empathise with fellow children or people in general.

Apart from their primary goal of teaching children equality along with emotional intelligence, the owners are also expecting to make the children conscious about musical beats and rhythm. “The expected outcome of this project is to expose the children to music and theory of the composition and make them conscious about the concept,” confirms the manager. Surprisingly, in its very first stage the kids have started making their own musical instruments and composing empathy music for their fellow children in the community. “We have small music clubs and they practice their empathy music,” she adds.

Ask the manager, if the process has been approved by a psychologists and she assures, “The program is developed on focusing on the child’s brain and learning capabilities and the tools of learning have been implemented across the world for this process, so it is surely in favour of the children’s development,” assures Gargi. She also confirms that more than 300 students have successfully been taught empathy music and equality and they have been making their own music.

The programme combines learning theory from the Yale Centre for Emotional Intelligence, USA, with music therapy and music making. The project uses the power of making music to build a lifetime of empathy between boys and girls around the world. “We strongly believe through music and emotional intelligence we can build a lifetime of gender equality and empathy,” says Priyanka Sharma, who is the first person to be trained under this concept from India. Adding that the learning comprises fun and that’s how the children like to learn and participate in activities, she proudly claims, “So far we have seen  a remarkable development in the children."