The comic book hero takes on Russian baddies in the book 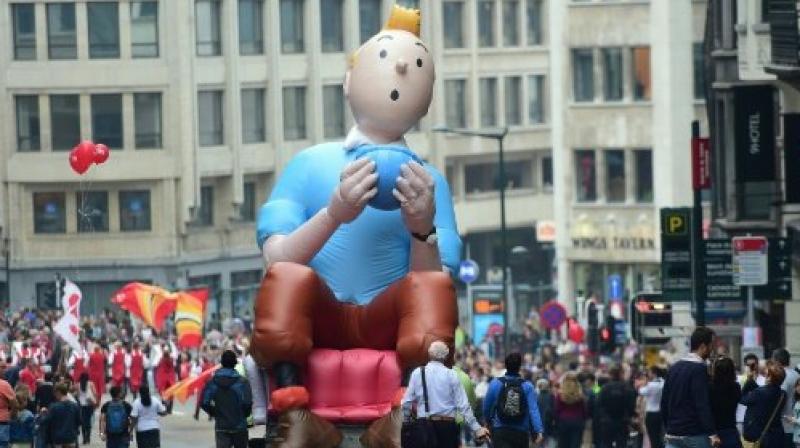 "Tintin and the Soviets" is finally being published in colour more than eight decades after the comic book first appeared. (Photo: AFP)

Paris: Tintin has discovered his inner Rambo and is ready to give Russian bully boys a taste of their own medicine in a book which will go on sale in France on Wednesday. But before Moscow condemns it as another piece of Western Russophobia, this has nothing to do with Vladimir Putin.

"Tintin and the Soviets" is finally being published in colour more than eight decades after the comic book first appeared, at a time when Europe was also fretting about a rising Russian menace.Unlike the rest of his adventures, the book that launched the boy hero in 1930 only ever appeared in black and white.But to cries of sacrilege from the purists and even its late creator's secretary, Tintin's publishers Casterman are issuing a colour version of the story Wednesday in French where the young reporter gives a rogue's gallery of Russian baddies what for.

For decades the viscerally anti-Communist story -- which first appeared in the Belgian Catholic weekly Le Vingtieme Siecle (The 20th Century) -- was not regarded as a full part of the Tintin canon. It was only in 1999, 16 years after the death of Tintin's creator Herge, that it was recognised as part of the official 24-story series. Experts have long debated whether the rough and ready testosterone-fuelled character in the story was fully developed, and could be seen as Tintin proper.

"The character is not fully elaborated," admitted Philippe Goddin, Herge's biographer. Tintin is far from the generous young man of later stories, he said, but instead a rather thuggish figure eager to "settle scores with people he doesn't like". He spends most of the book getting into fights, various other scrapes or being chased. "When Herge began the story (he was only 21 at the time), he obviously could not imagine that the character he was creating would become so successful," Goddin added.

Herge, whose real name was Georges Remi, always promised he would go back and redraw the story but he never got time to do so. His personal secretary Alain Baran on Wednesday criticised the decision to colour in the pictures, saying "it should have been left in the state which he left it"."Although technically very successful, colouring it and publishing it under Herge's name violates the principle" that work should not be altered after his death, he added.

The book's rough edges, however, go beyond Tintin's behaviour. While certain scenes in the 1942 adventure "The Shooting Star" were changed by Herge after the end of the war to alter the original stereotypically Jewish American villain Blumenstein, a rather grating scene that makes fun of a Jewish tailor has survived in "Tintin and the Soviets".

As a huge retrospective of Herge work -- which closes in Paris Sunday -- showed, Herge never overcame his shame at his passivity during the Nazi occupation of Belgium. Although the artist did not collaborate actively, the show's curators insisted, he continued to draw a Tintin strip for a collaborationist Brussels newspaper.

A spokeswoman for Casterman -- who said the new edition of the book would published in other languages later -- said that they never considered changing the scene involving the Jewish tailor. "It is not up to us to retouch or modify the work. You wouldn't do that with an old black and white film from the time. Herge did not change anything so we have to be guided by that," she added. Contacted by AFP, the French Jewish group CRIF declined to comment.