While some artists are singers, dancers, painters, musicians or possess other talent, there are a few who are all-rounders. 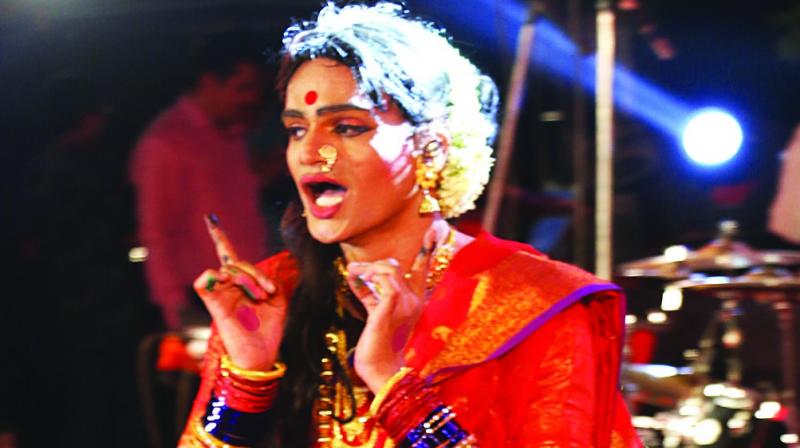 Nilesh Auti dances during a performance.

This beautiful world looks even more beautiful because of artists who show us the various colours of life in the world. While some artists are singers, dancers, painters, musicians or possess other talent, there are a few who are all-rounders.

I have known this super-talented young man — who is a well-known painter, a very expressive dancer who specialises in the Maharashtrian folk dance Lavni and is also an accomplished singer — Nilesh Auti.

Recently, in the heritage city of Ahmednagar in Maharashtra, Jayant Yelulkar and Rasik Group, who are famous for their contribution to art, had organised their yearly Padwa festival to promote tourism in the city. The huge open ground, mega sets and over 50,000 people in the audience all waited for just one man, who came draped in a long nine-yard red saree, and danced with effortless ease. Moreover, while dancing, he even painted some important symbols of Ahmendnagar and totally mesmerised the cheering audience who asked for a repeat performance.

I have known Nilesh for a few years now, I had always heard of his talent of dancing and painting, but this was the first time I was seeing it live and I must admit, like the audience, I too were totally blown away. Dressed as a women and making the expressive Lavni moves, he looked so much like an enchating character that I could not take my eyes off his beautiful face. His effortless and imaginative painting, to match his dance, was a perfect fit. After his show, I sat with my talented friend and asked him a few questions which I never did before: 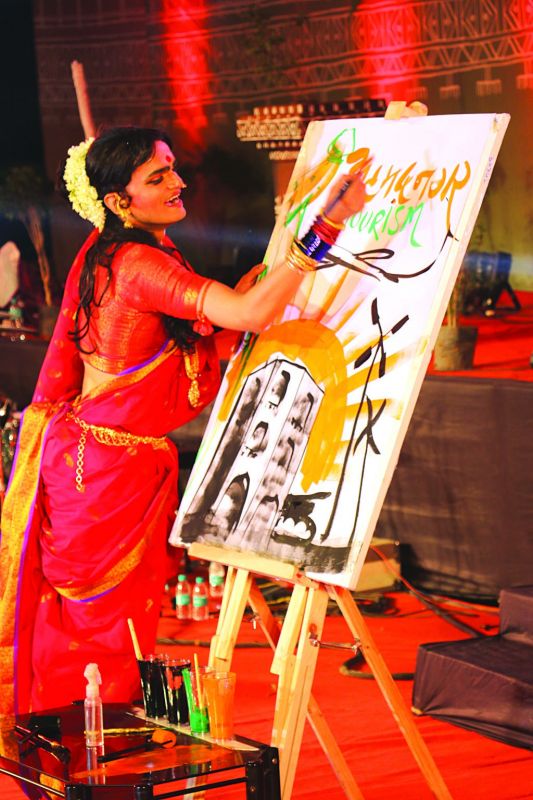 Nilesh Auti paints during a performance.

What made you take up Lavni?
I am a proud Marathi man, so anything which is to do with Maharashtrian culture is close to my heart. I love Lavni for its earthiness, it is one of the expressive old folk dances of India which is filled with spice, beauty, lots of abhinaya and elegance. Yet, it is simple to understand for everyone and open to interpretations. Lavni is known as a way of expressing human emotions, be it for a male or a female, it uses day to day life, relations, people and philosophies, and presents it in a dance manner.

What does Lavni really it mean to you?
To me, Lavni is not just a dance for entertainment, it holds a strong civic sense and when the time comes, Lavni can also talk about current affairs, about the system, the ministries, wars, the environment, adhyatma, mythology and their interconnections with human life and its practicalities. There are examples of Lavni having encapsulated all such and many more subjects, and it also contributed to social causes like India’s independence from the British. Long before the time of televisions, performing Lavni was a strong way of communication, and had strong entertainment value. This is why I fell in love with Lavni and her boldness, beauty, upfront nature, hotness, sophisticated style and realism. I feel Lavni makes the audience glued to their seats, whether they have experienced it before or even if they have never watched it. I strongly believe that all dance forms are immortal, and Lavni is one of the most popular amongst them we all know.

How was this performance different from your previous ones?
I have always either danced or painted on stage, but this time, it was special because I was performing a combination of dance and painting for the very first time. This performance was done especially to promote Ahmednagar Tourism. For me, it was an experiment and a responsibility, so it was technically very challenging for me. I was doing a traditional dance, but at the same time, wanted to show the modernisation the city of Ahmendnagar is going through and the main attractions of the city. While dancing, I painted the historic Chand Bibi Ka Mahal, the famous windmills, Indian military tanks as the symbol of the Army base and also the airport that is expected to be built soon in the city. Doing all this together, while I danced, was a tough, task but I am glad it was received well. 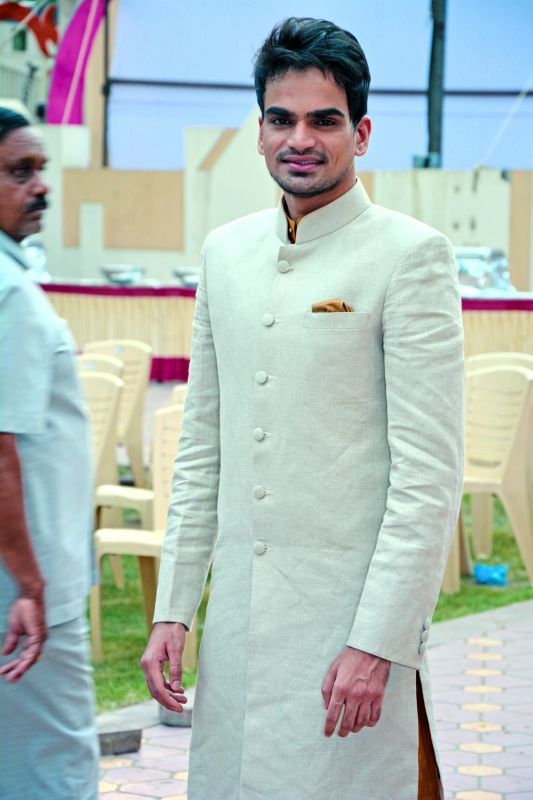 Painting and dancing at the same time, how difficult was it to prepare and execute?
Promoting tourism through dance and painting, the entire idea itself was risky and it was very difficult to blend the two. I did not want either of the two arts to look mismatched or misbalanced, and to add to the pressure, there was the huge number of people in attendance. Each stroke of my brush on the canvas was pre-planned, and yes, the planning was complicated. To get it all right, I tried different type of colours, brushes and paper to get the right set up. I practiced almost a 100 times painting the same thing for a couple of weeks, and finally it happened.

What preparations go into preparing a Lavni performance for a male dancer?
Performing Lavni dressed in a female avatar is a big responsibility. Hence, the choreography plays a strong role. Understanding the intensity of the number and meanings through the characters, mostly from the female point of view, and gelling it with your own interpretations and right timing is important. Also, a man has to be a strong observer, he has to extra carefully plan costumes, make up and hair. There are many do’s and don’ts to look apt and appealing on stage. One has to make conscious efforts to carry an authentic nine-yard draped saree, a stylish hairstyle, jewellery and so on. In short, a man has to make 10 times more efforts and two time more time than a woman would need before getting on the stage to dance Lavni.

What should a male dancer keep in mind if he wishes to take up Lavni?
It is most important to remember that Lavni is like storytelling, but though expressions and stylish moves. Also a male dancer must not over-do the makeup or the dressing up to show how convincing he can look as a female. Focusing more on the dance always helps. Performing a dance like Lavni is very challenging for a man as compared to a woman, especially with respect to the feminine look and attitude. There should not be a slip of character or expression.

What do you feel regarding the stigma attached to a man dressing up as a woman to dance?
I have never faced any such stigma, nor have I ever bothered about it, because for me, dressing up is a requirement of the performance. Rather than thinking about what people say, one can better focus on art, because art is natural, positive and pure. Stigmas are judgements which can lead to negativity and take a person far from reality. I believe it’s people who admire, bu also people who attach stigmas. I love people for both the things. To me, my art is like worshiping, art is beautiful. If a man can look as beautiful as a woman, then there is no harm in dressing up and sharing it with people. We live in a gender equality world, so whatever is beautiful must be shared.

What is the future of male Lavni dancers in a country like India where dance is still a hobby for many?
Many male Lavni dancers make their living with this unique art. Shows like “Bin Baykancha Tamasha” (Show without Women) are very famous. All the men keep travelling for these shows without women. Renowned dancer Prakash Pawar and his very talented team are doing a great job in the field of Lavni. For me, male Lavni dancers were always there and they will be there in the near future too.

Artist like Nilesh, who make for a complete artist, are very few. Such artists have the ability to win people’s hearts not just through their dance and painting, but also through the way they bring change and awareness to society. Nilesh Auti has all the qualities of being a role model, and I wont be surprised if soon, a Lavni male dancer will be looked upon like a Bollywood super star.

Sandip Soparrkar is a World Book record holder and a well known Ballroom dancer and a Bollywood choreographer who has been honoured with National Achievement Award and two National Excellence Awards by the Govt of India. He can be contacted on sandipsoparrkar06@gmail.com