Multimedia art to Jataka opera, a splurge of world premieres

The Dasjati or Ten Great Lives are an iconic part of the Buddhist scriptures, and each one tells the colourful life of a previous life of the Buddha. 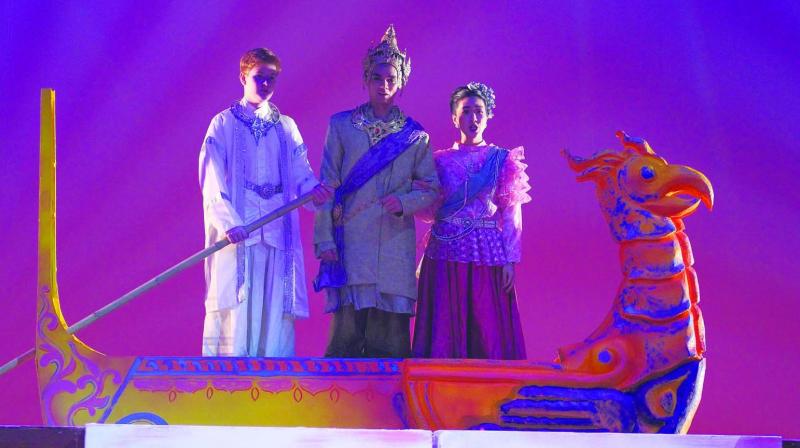 A scene from the Dasjati series

Bangkok has always been an art and culture mega-hub, but recently there has been a surfeit of world premieres and global shows that have put culture freaks in a spin.

First and foremost, comes the Monet to Kandinsky multimedia art exhibition, the most talked about event in the city, at the River City Bangkok Galleria (RCB Galleria).

Here, the works of more than 19 top European artistes of the early 20th century, famed names like Monet, Gaugin, Renoir and others, have been uniquely resurrected through multi-channel graphics, state-of-the-art projectors, huge screens and surround-sound.

It was an awesome experience to sit in the large darkened room of the RCB Galleria, and watch the great art works of these iconic artists spin and spill all around you, accompanied by stunning and spectacular classical music. There were benches placed in the centre of the room, and some mattresses on the ground so that viewers could relax and enjoy the show for as long as possible.

It was an immersive art experience of the most exciting kind, which was why it has encouraged several repeat visitors. A record 27,000 people have seen the show, in 20 days!

“The idea is to reach out to many who have not been to the museums, and may now be inspired to see them,” said Linda Cheng, the dynamic managing director of River City Bangkok.

River City Bangkok has always been known as the biggest centre for arts and antiques in southeast Asia. In fact, it still holds as many as six art auctions a year!

But recently, it has admirably expanded its vision, to add contemporary art forms, and the entire second floor of the large venue has been dedicated to contemporary art.

“We have embarked on the journey to transform and rejuvenate RCB,” said Linda. “The contemporary art spaces on the second floor have been aimed to attract the new generation of art lovers and collectors, who may later also like to learn and collect antiques.”

Since they are “passionate in promoting the appreciation of all art forms”, RCB also boasts of the RCB Photography Gallery, RCB Music and RCB Film Clubs.

The exhibitions at RCB have been as diverse, as a wonderful one on Ganesha by a gallery in Hushing which specialises in images of the Indian god, striking photo-studies of the male body and a massive multimedia art exhibition on Taiwan’s world-famous National Palace Museum.

The Monet to Kandinsky exhibition was planned over two years, almost from the moment Linda Cheng joined RCB. She said she wanted to present “an art exhibition of great international appeal and the highest standards”.

It had huge challenges, of course-funding (an eight digit number), shipment, setting up the extraordinary multimedia show, formulating the Thai subtitles.

The multimedia art show was produced by a Berlin-based company which has taken it to countries as varied as North America, Europe, Russia, Australia, and won rave reviews everywhere.

This is the first time that the art exhibition has been seen in Asia, and it certainly won’t be the last, judging by the tremendous response in Bangkok, from varied segments of people — adults, students, expats, tourists. Some even flew down from the neighboring countries to take a look at this sensational exhibition. There have also been talks and lectures by experts, in keeping with RCB’s goal, not just to hold art exhibitions, but to spread art education.

After the Monet to Kandinsky exhibition ends on July 31, another equally magnificent multimedia arts exhibition will follow, this time of works by the Italian Renaissance masters.

It will be on show in Bangkok, from August 8 to October 31, and is expected to attract huge crowds not just in Bangkok but also in the region.

Linda said she had many more plans for the year, at her exciting venue. When asked if she would be interested to hold an Indian exhibition, she stated that she was very open-minded.

The second mega-show in the city was in the field of musical theatre, and it was a world premiere!

Interestingly entitled The Workshop — A Dress Rehearsal for Life, this was a unique musical, written by a well-known American motivational coach, Dr Cherie Carter Scott, based on individuals she had encountered at the numerous workshops she had held around the world (including India). She has written many books on the subject, including a famed bestseller, which featured her in the Oprah Winfrey Show, twice.

Dr Cherie, husband Michael Pomije, and her co-writer and sister Lynn Stewart, now have a home in Bangkok, although they continue to travel around the world. That was why they decided to have the world premiere of their maiden stage production here. It was a pioneering play, in many ways.

It was the first example of a personal motivational workshop being translated to the stage and performed as a musical. It was also the first case of an international English language production in Bangkok, being performed by an all-Thai cast.

The 11 characters in the play had problems that contemporary audiences could identify with — weight, overwork, abuse, discrimination and communication break- down.

That, in essence, was the strength of the production, which also had a live band and 17 vibrant songs, which added an extra dimension to the drama.

The Thai cast, led by well-known Thai stage director Napis Reyes, and monitored by noted Bangkok-based British opera maestro Stefan Sanchez, had been practising with voice, language and diction coaches for more than six months. The shows were performed for more than a week to diverse audiences including many who had partaken in Dr Cherie’s workshops abroad and flew in especially to see its theatrical production.

Producer Sanchez is now planning to tour with the play, to neighboring Asian countries.

Last but not the least, came the world premiere of two Jataka tales, by internationally renowned Thai opera-genius S.P. Somtow, as part of his ambitious Dasjati series (Ten Lives of the Buddha), five of which have already been created and performed.

The two new tales, performed this week, were Chandakumar and Mahosot. The first was re-created as a ballet, and the second as an opera.

The highlight of the Dasjati tales, enacted by Somtow’s magnificent Siam Opera group, are that they are a dazzling amalgam of opera, ballet, choir, dance the productions have a 100-strong cast, great sets, gorgeous costumes, and marvelous music created by Somtow, which is one of the chief highlights of the productions.

The maestro took one of the earlier Dasjati tales The Silent Prince, to Europe last year, and got outstanding reviews!

The Dasjati or Ten Great Lives are an iconic part of the Buddhist scriptures, and each one tells the colourful life of a previous life of the Buddha.

When completed (hopefully, next year), Somtow would like the 10 tales to match the Ten Ring Cycle of Robert Wagner, and be performed as a whole!

As always, Somtow had a bunch of international artistes, who flew down especially from Europe, Australia, Asia, to partake in this production.

One of them is bass singer Damien Whiteley, who has performed around the world, but feels that Somtow’s music has “the rare quality of touching one’s heart”, which is why he has been an intrinsic part of his many opera productions in Thailand.

This year, there are some newcomers, too, including Austria-based Thai singer Sasaya, France-based American performer Lizzy.

There’s also Micky, the talented Thai youngster, who studied music in Cambridge, and will be “conducting” for the first time, together with Somtow’s prodigious protegee Trisdee Na Patalung.

Somtow deserves total credit for not only reviving the classical music scene in Thailand, especially opera, but also discovering and promoting new talent.

With his penchant for other classical musical forms, especially Indian (Lord Ganesha inspires him a lot), it was great to see that he had incorporated the Indian Kalyani raga in this production

As always, Somtow wished he could take his productions to India.

One seriously wishes he could, as his shows are a magnificent amalgam of East-West art forms, with plenty of Indian touches (costumes, sets, music) that would appeal hugely to perceptive Indian audiences.