The satirical images, tackling issues such as migration and poverty, began popping up late last month. 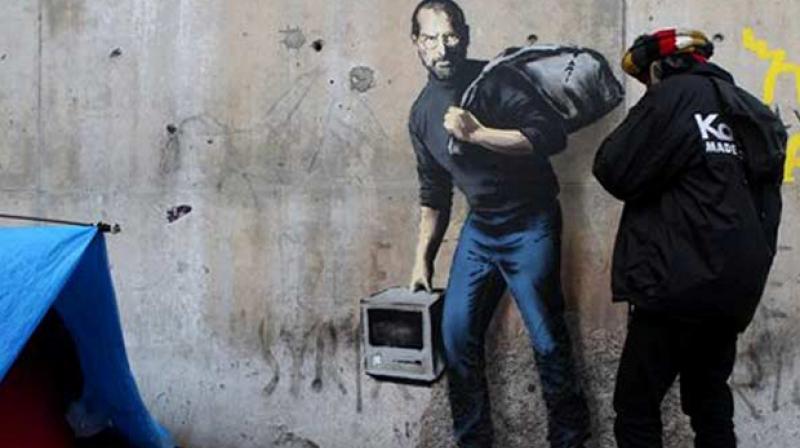 PARIS: British graffiti artist Banksy, known for his politically charged sketches on walls from London to New York to Gaza City, has descended on Paris, painting a series of murals that are sparking debate among residents and tourists.

The satirical images, tackling issues such as migration and poverty, began popping up late last month. The secretive artist has since posted photographs of them on his Instagram account and added comments, confirming his authorship. One mural, on a street in northern Paris where migrants often sleep rough, shows a black girl spray-painting pink wallpaper over a swastika. The painting has since been defaced to make it look like she is drawing the swastika herself.

Others depict rats, a common Banksy motif, including one flying through the air on the back of a champagne cork, and a pair walking under a parasol near the Eiffel Tower. One of the most provocative, painted near the Sorbonne, on the trendy Left Bank, shows a stern man with a hand-saw hidden behind his back offering a bone to a pleading dog that has had part of its front leg sawn off.

Vincent, the director of an art foundation in Paris, stopped to take a picture as he headed for lunch.

“This painting is of an unspeakable cruelty which is representative of the times in which we live, times of wantonness,” said the 49-year-old. “The man’s stare is empty and cold, while the dog is weak and full of humanity. I think it is a clear representation of the European context and the migration crisis.”

This year marks the 50th anniversary of the May 1968 uprisings, when French students and unionists mounted violent protests across Paris and its surrounding area, bringing much of the country to a standstill for weeks.

Referencing the anniversary, Banksy painted a picture of a rat holding a stencil pen and wearing a bandana over its face on the side of a building near the Pompidou Center. Another showed a rat dressed as Mini Mouse perched on the numbers 1968.

While two of the nine murals have been defaced, most of the others have been covered by plexiglass to protect them. Banksy concluded his series with a mural on an emergency escape door to the Bataclan, the music venue where 89 people were shot dead by Islamist militants in November 2015.

The image depicts a woman in mourning, wearing what looks like a hijab, the head scarf worn by Muslim women, although the picture also has echoes of Mother Theresa. “This one is my favorite,” said an American tourist. “I can feel that her sadness is deep and palpable.”