Wrapped in the magic of sari

Call it revival or making a fashion statement, in the last few years, more women from the younger generation have been sporting the sari. 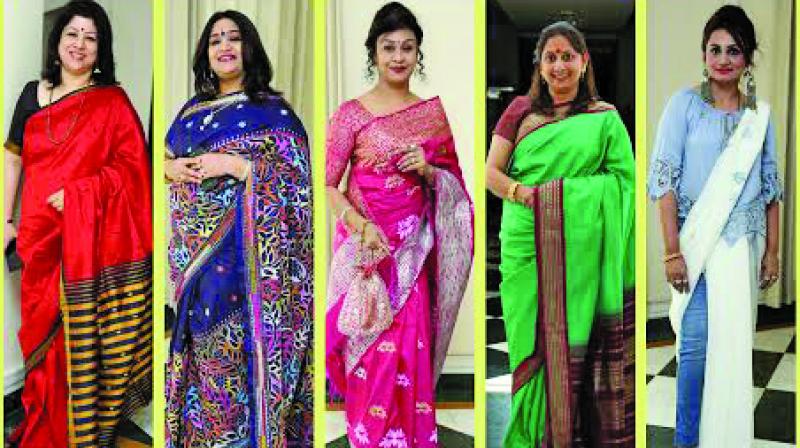 About a decade and a half ago, lamenting about the state of sari wearing I had feared that it was poised to go the kimono way if strong steps were not taken to inculcate sari wearing among the gen next. Happily I am proved wrong for these last few years have seen a resurgence of younger generation women taking to sporting saris more often. The fact is that social media has fuelled this revival of sorts and impelled an increasing number of young women to wear and post saris on closed groups.  For an avowed votary of the sari like me, it is a hugely satisfying feeling.

One of the earliest groups with the highest number of active members — almost 17,000 and counting — is Magic of Saris. I had stumbled on it last year and have keenly followed and participated in it ever since. Recently the group decided to meet offline in Delhi and what a splendid meeting it turned out to be. To meet so many women whose saris one had seen and was privy to their sari stories was tinged with mix of nostalgia “Ohhh I loved that blue tussar sari of yours that belonged to your mother!” to “how is your aunt who gave you that Behrampur patta sari”…  and a countless other delighted squeals!

It was a smartly designed programme that included a short and pithy symposium on how to inculcate sari wearing among young women and a highly interactive fashion show. The ramp walk showcased the traditional weaves of India and some regional styles of wearing the sari. It turned out to be a huge hit with women sashaying to the popular ghazal Huzoor iss kadar bhi na itra ke chalieye…  where everyone who was there participated. How they loved being part of it and showcasing their saris and talking about the weave and the sari story, for the group’s unwritten motto is every sari has a story.

The two sisters behind the movement Suneeta Mishra and Susmita Misra have been running the group for nearly four years and happily take the back seat and let the group do the talking — both online and offline. “It stems from a conviction that one’s work must speak more than we ourselves,” says Susmita with a smile. 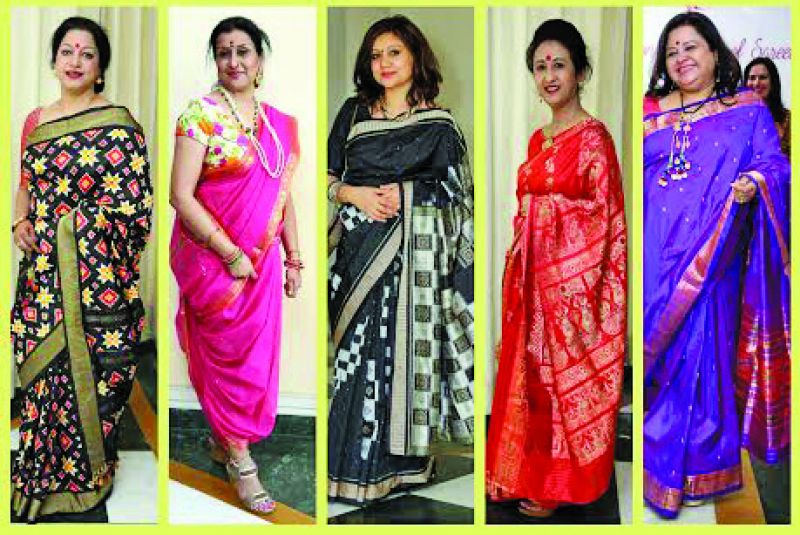 The group has successfully launched two very positive programmes “Gift a sari” and documenting gently worn saris before sending it to a sari library in Bhubaneswar. Here these gently work saris can be acquired at a nominal cost worn, dry cleaned and returned or even bought at a fraction of its actual cost. The idea is to make the sari go a little longer. “It started when we found that many members would retire a sari when they bought a new one. Besides so many of our designs and weaves are not being done any more and this is a small step in preserving the sari a little longer. Members are encouraged to document the older designs as well. The library programme is to reach out younger women and middle class women who would like to wear specific types of saris but these are often are prohibitive cost wise. These can be borrowed at a nominal cost and dry cleaned before returning,” says Susmita.

“The idea behind Gift a Sari is to share with the less fortunate, saris that they can use comfortably. Very often when we give our domestic staff expensive saris it is a liability for its care and dry cleaning is an expensive project for them hence we prefer that members give them easy to care saris. Sharing should become a way of life and an unbroken chain,” insists Suneeta. These saris are then given in charity to destitute homes and others. Members are encouraged to post the pictures of sari gifts to encourage other members to follow suit.

Senior bureaucrat Sudha Pillai who spoke at the symposium recounted some hilarious instances of her sari wearing escapades and felt that the government could do more to for the weavers’ welfare. The other sari wearers felt that stitched saris were a least cumbersome option for young women to take to saris on a day to day basis. The consensus was that design elements need to be incorporated to render saris less ornate and more youth friendly that can be worn casually. Members spoke about revival initiatives of ordinary weaves that are finding popular acceptance.

I am humbled by the way women come forward to support each other emotionally and such groups that conjoin people with similar interest areas have an intrinsic bonding anyway. When it gets built upon, it makes the experience so beautiful. I have met so many new women in this group but it seems as if I have known them for years. Every once in a while I run into someone who has read my posts or seen my sari and remembers it and starts a conversation as if they know me — believe me it is an amazing feeling that one has been able to reach out.

Dr Alka Raghuvanshi is an art writer, curator and artist and can be contacted on alkaraghuvanshi@is yahoo.com