While designing the collection, it was important for Aggarwal to bring out the ethos of the label. 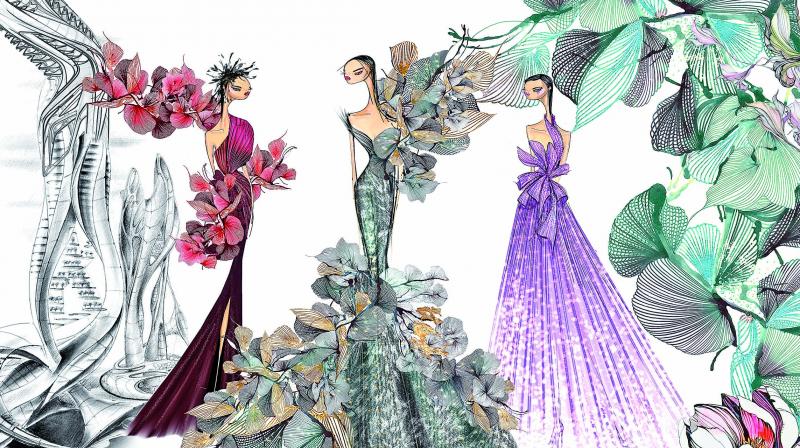 Amit Aggarwal’s 3D art on ensembles to set the tone for the finale at LFW.

While most Indian couturiers like to play safe with traditional designs, for Amit Aggarwal, the idea of modern-day fashion is incomplete without futuristic silhouettes and experimental fabrics. In recent years, not only did he step up the game with his avant-garde designs but in a short period, was successful in establishing his signature style among a sea of designers. This week, Aggarwal is set to present his first-ever finale collection for Lakme Fashion Week Summer-Resort 2020 in Mumbai, and he gives us an exclusive insight of his lineup for the prestigious fashion event.

The designer, who loves to challenge the norms and dares to stand out with his  edgy creations on the runway, is excited to showcase his 3D-inspired line. He mentions, “My collection is inspired by Lakmé's theme for the season, #BetterIn3D - which is about the future of beauty and fashion, bringing out a new dimension in you. The collection AXIL represents a beautiful organic flower that grew in the middle of concrete — it's an interesting understanding of vivid flora that co-exists with cement, brick, steel, and metal. I imagine a world where flowers go all metallic and concrete goes all coloured. For me, the whole aspect of taking something outside the form of the wearer or the body is to understand that there are multiple dimensions to a personality and it cannot be contained in a single structure of skin and bones, I feel that there is an aura, an entire halo in every organism; that's exactly what my understanding of 3D is. I think there is a certain beauty; something that you are wearing lingers in the air even after you have left it.”

While designing the collection, it was important for Aggarwal to bring out the ethos of the label and the signature techniques that needed to come back in a contemporary, modernized and evolved way. Since it's his first collaboration with a beauty brand, to fuse his design sense with the theme was an experiment in itself. Speaking about the experience, he says, “I think, overall, it has been a growing understanding of what the collection needs to look like but primarily, I would say we have been working towards it from the day we knew about it so it's been close to three months. I think the theme of #BetterIn3D projected the fact that makeup could mean a lot more than just beautifying yourself. It is about understanding personalities, using the set of colours or the same set of tones but still trying to  embrace yourself that sets the ball rolling. I always say that clothing goes beyond the understanding of how visually it looks but also needs to be put in a context to understand where it has emerged from. And I think, both the brands have merged seamlessly to bring out the best of this theme.”

While the fashion world is clearly divided over the ‘showstopper’ phenomenon where designers fear that the celebrity overshadows their efforts, each season finale of LFW has a top actor walking the runway. Would this year be any different for Aggarwal's finale show? To which, the designer hints, “I think, for me, a showstopper, in its very true sense needs to be a very dynamic or three-dimensional personality, someone who has gone beyond just being boxed. When a person kind of becomes the muse for a show or a concept. Besides that, they need to be a great family person and have a lot more than just being an outwardly beautiful person.”

A strong supporter of sustainability and futuristic technologies, Aggarwal doesn't believe in designing season-specific clothes. He feels that colours transcend between seasons, but overall, his creations project an ideology for a woman who is a world traveller and has lived through different eras and different periods. He shares his views on sustainable trends in the fashion industry and says, "I think colours or fabrics are myopic things to look at. Honestly, for me, sustainability has been a long talking conversation about fashion or lifestyle choices in the last decade. And I think that was the much-needed step to take towards a better future. But I also feel that sustainability in fashion cannot just come from understanding what our history has been and trying to understand that the hand-woven fabric is far more sustainable than something that is created out of a byproduct.”