In tune with the times

Vijay Tendulkar’s most controversial yet revered play is all set to be staged in the city. 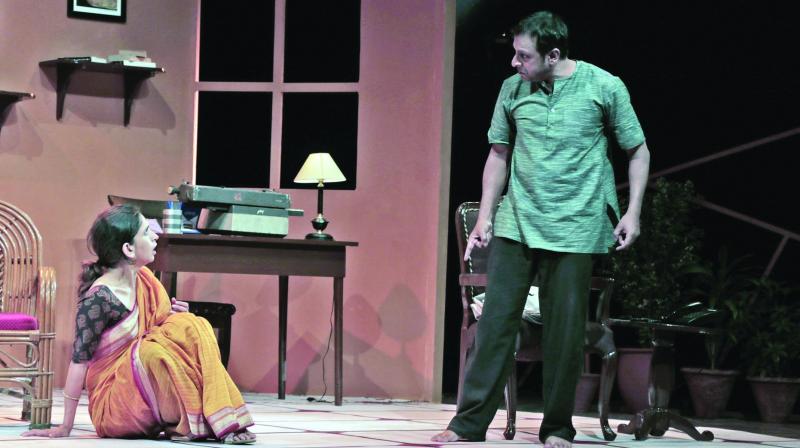 The most controversial character that brings the theme of hypocrisy to light is of alcoholic Arun’s, who is married to an upper-caste Jyoti and abuses her violently and verbally.

The prominent Marathi playwright Vijay Tendulkar’s fiery play Kanyadaan was first staged by Lillete Dubey in 2007. However, after getting stalled for several years, the production returned last year on the 8th Theatre Olympiad in National School of Drama, receiving standing accolades. Now an English adaptation of  Tendulkar’s most revered yet controversial play is all set to be performed soon.

Kanyadaan explores the conflict of ideologies and hypocrisies of liberals through a turbulent relationship between Nath Devlalikar, a Gandhi reformist, his daughter Jyoti, and his son-in-law Arun Athawale, a Dalit activist. The most controversial character that brings the theme of hypocrisy to light is of alcoholic Arun’s, who is married to an upper-caste Jyoti and abuses her violently and verbally.

Actor Joy Sengupta who has been playing Arun since the original production, believes that the playwright’s intention is to bring out the hypocrisy which he closely observed in the Dalit Panther’s leader who was abusive to his wife as well. “A lot of people basically think that this play is anti-Dalit, it’s not. The play is actually on hypocrisy – social, political and personal,” shares Joy. He further adds that Arun’s a very dark and complex character, and explains, “ He stops seeing anything else, apart from the woman, who is a representative of the upper caste. He sees her as someone trying to dominate him, just like the upper caste dominated the Dalits forever. He takes out this historical anger at a personal level. That is his major feeling.” Even though he portrays the character well, Joy absolutely despises the violent attitude of Arun. “I personally believe that you cannot ever teach or reach to people or grassroots of any issues if somehow you’re not able to walk those ideals and values in your day to day life,” he reminds us. However, he also identifies with Arun’s anger that plagues his character. “But as far as Arun’s historical anger is concerned, I identify with it. I completely identify with the humiliation, discrimination, exploitation, and dehumanisation of the Dalits that has happened in the Indian society for the last 3000 years. It is just not with the method of executing it at a personal level of tormenting someone who sacrificed so much in order to be his partner,” he shares. He further adds that this dichotomy actually proves the point which Tendulkar was also trying to drive through this play, which is today’s victims, can become tomorrow’s abusers.

Moreover, Nath’s character is also developed to show the hypocrisy in his ideals. Joy enlightens, “The father espouses caste annihilation by embracing other caste. He would go out of his way to prove a point. That itself is hypocrisy, because you do not have to force an issue. There is a time and place for every historical change, but this man was always out there to prove a point and even sacrifices his kith an kin in order to uphold the flag of liberalism and idealism.” In a way, Tendulkar’s cynic masterpiece is hence apparent of the cynicism of the time. “Tendulkar’s cynicism that came through, at a point where cynicism was very prevalent in early 80s.  It was the time of post-Emergency, post-falling of the coalition government – Janata Dal, all of that was happening, so it was a very interesting phase in the Indian history when cynicism was very natural,” Joy concludes.

—The performance of the play will be held tomorrow at Royal Opera House.