Show zeroes in on Shri Kshetra

Seeing the Lord s idol taken to a kingdom of rakshasas, the petrified devas sent Shri Ganesh to solve the problem. 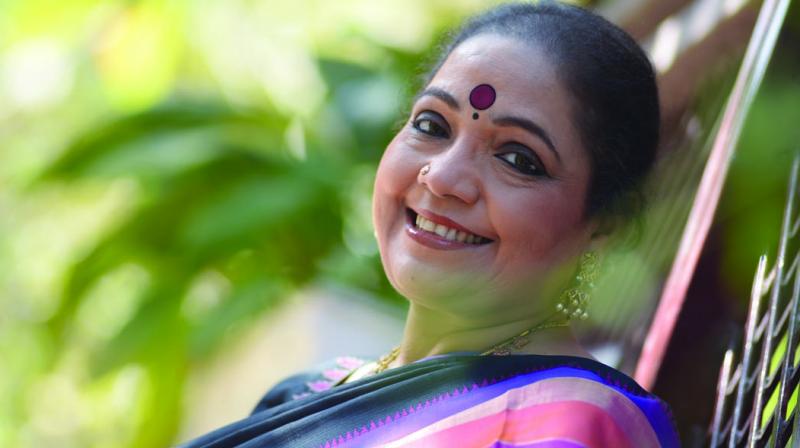 Nathdwara is a significant Vaishnavite shrine pertaining to the Pushti Marg or the Vallabh Sampradaya or the Shuddha Advaita founded by Vallabha Acharya, revered mainly by the people of Gujarat and Rajasthan. Vitthal Nathji, son of Vallabhacharya institutionalised the worship of Shrinathji at Nathdwara.

One of my favorite people in the field of Art is Usha RK, who you all know as a renowned art consultant, promoter, a curator and a historian, but to me she is a friend who loves all kinds of dance forms and this love for various forms and its styles that got Usha ji into research and her passion for the performing arts made her an art consultant. Though she wanted to be a performer but her parents wanted her to be a singer and finally she chose to be an art lover. I consider her to be a ‘walking talking knowledge book of dance’. Recently Usha ji presented a fabulous in the capital and is travelling with it all over India, a show which spoke and gave in-depth knowledge of Shri Kshetra (Shri Ranga and Shri Nath ji).

Each of the presentations included the two styles Bharata Natyam and Kathak by some of India’s well known dancers. The fourth edition of Shri Kshetra featured Shri Ranga of Srirangam and Shri Nath Ji of Nathdwara performed by Pavitra Krishna Bhat - Bharata Natyam as Sri Ranga and Abhimanyu Lal - Kathak as Shri Nath Ji. The description of the Lord, the temple, his attributes and Leela’s were delineated in the performance.

Srirangam is an island and a part of the city of Tiruchirappalli, in South India. Srirangam is home to a significant population of Srivaishnavites (followers of Lord Vishnu) and is famous for its Sri Ranganathaswamy Temple, a major pilgrimage destination for Hindus and the largest temple complex in India.

Srirangam among a few "self-manifested" shrines (Swayam Vyakta Kshetras) of Lord Vishnu. The temple complex is enormous and has seven prakaras or enclosures. These enclosures are formed by thick and huge rampart walls which run round the sanctum.

There are 21 magnificent towers in all prakaras providing a unique sight to any visitor. Srirangam is bounded by the Kaveri River (also known as Cauvery river) on one side, and the Kaveri distributary Kollidam on the other side.

Pavitra portrayed a devotee who urges to seek a glimpse of Shri Ranga and hence starts his journey from Kaveri river,  to the’ Garuda’. He merges with the Lord and becomes one with HIM. This production emphasizes on the elements of bhakti to the Lord and touches chapters like Kshetram, Thirtham, Mandiram, Pravesham, Darshanam, Anubhavam and utsavam.

Showcasing the story of the reclining Lord through the most popular Krithi of Muthuswamy Dikshitar Sri Ranga pura vihara, the dancer elaborates thus.

Lord Ram after his aradhana to Vishnu’s idol in a reclining form, gifted the idol to Vibhishana after killing Ravana as a symbol of love and eternal protection on the condition that wherever the Idol was once placed that would be the permanent abode of the Idol.

Seeing the Lord s idol taken to a kingdom of rakshasas, the petrified devas sent Shri Ganesh to solve the problem. Vibhishana found himself in a dilemma, he had to perform his evening pooja and could not keep the idol anywhere. Ganesha took the form of a shepherd and offered to help Vibhishana by holding the idol while Vibhishana performed his prayers. By the time Vibhishana returned, Ganesha had kept it on the ground and the idol had stretched in the Reclining form of Sri Ranganatha. Vibhishana persuaded the Lord to accompany him to Lanka, but the Lord refused. Lord Vishnu then gave his word to Vibhishana that he would watch over his kingdom and his glance would always be upon Lanka.

Juxtaposing alongside was the portrayal of Shri Nath Ji of Nathdwara. Nathdwara is a town in India's western state of Rajasthan. It is located in the Aravalli hills on the banks of the Banas River. This town is famous for its temple of Krishna which houses the deity of Shrinathji, 7-year-old infant incarnation of Krishna. The deity was originally worshiped at Jatipura Mathura and was shifted in the 1672 from Govardhan hill, near Mathura along holy river Yamuna after being retained at Agra for almost six months.

Literally, Nathdwara means ‘Gateway to Shrinathji (God)’.Nathdwara is a significant Vaishnavite shrine pertaining to the Pushti Marg or the Vallabh Sampradaya or the Shuddha Advaita founded by Vallabha Acharya, revered mainly by people of Gujarat and Rajasthan, among others. Vitthal Nathji, son of Vallabhacharya institutionalised the worship of Shrinathji at Nathdwara.

The temple was built there under the rule and protection of the then Maharana Raj Singh of Mewar. Shrinathji Temple is also known as 'Haveli of Shrinathji’ (mansion). The Shrinathji idol is the principal deity of the Nathadwara haveli, always shown with his left arm raised above his head lifting Mount Govardhana, while his other hand rests on his waist. Symbolic expressions are also involved in various shringaras of Shrinathji.

The U-shape tilak on the forehead represents the impression of Radha’s foot and the lotus garland is symbolic of Radha’s heart which Shrinathji keeps close to his own heart as an acknowledgement of love and dedication. The small Yamuna water container placed on the pedestal represents mother Yashoda and the throne on which the image rests is Yashoda’s lap. The lotus-shaped eyes of Shrinathji are also compared with Kamadeva’s bow.

Mangla:
This is the first Jhanki of the day and in winter it takes place before the sunrise while in summer, it is later. In summer he wears a Dhoti while in winter he wears a Coat. Arati is offered and this darshan is dedicated to the memory of Parmanandji (Poet).

Shringar:
An hour after Mangla is the next darshan where Shrinathji is well dressed with a mala of flowers. He is then shown in the mirror  and a flute is placed in his hand. He is supposed to play with the children during this time.

Dry fruit is offered to Shrinathji and his dress varies according to season and festival. The songs are sung by the poet Nandadas.

Gval
This is the third Jhanki when Shrinathji takes his cows to the field. During this darshan Dhoop Deep is performed. The singer in this Jhanki reminds about the singer, Shri Govind swami, Kheer and Rabdi is offered to Shrinathji.

Rajbhog
The main darshan of the day is Rajbhog. Shrinathji is well dressed and served with most delicious and nutritious food. An Aarti is performed. The Kirtankar is poet Khumbhandas.

Uthapan
At about 3 p.m. Shrinathji awakes after his noon sleep. Vina is played and Kirtankar is supposed to be Surdasji.

Bhog
During this darshan, Shrinathji is offered fruits and light meal. Shrinathji holds conferences with other Gods & Goddesses and one should ask to shrinathji and request him to fulfill the desires.

It is in this Darshan one will find Chadidar who is the guard. The kirtankar in this Jhanki is Chaturbhujadas. Dhruv Bari is the place where one can request lord to fulfill his wishes.

Sandhya Arti
This seventh Jhanki is at dusk when the Lord used to bring his cows back to home. The kirtankar is supposed to be Chitarswami. Evening Arti is performed.

Shayan
This is the last Jhanki which emphasis for Shrinathji to retire for the night. An arti is performed. This darshan is usually held for six months. Thakurji is offered paan. The kirtankar is supposed to be krishnadas.

Abhimanyu Lal well known Kathak dancer and Guru began his presentation with a very lilting composition to awaken little naughty Krishna. Mother Yashoda jaago Gopal Lal ....informing him that all his friends the gwalas are waiting for him to play and graze the cows. Yashoda tempts him with sweets but the adamant child krishna refuses to get up. And when he does not only mother Yashoda but the entire universe receives the Darshan when the curtain rises.

From the jhanki darshan Abhimanyu Lal went on to describe Krishna as ‘Leela Mohan’ one who always stuns his devotees in wonderment, his simple antics were nothing less than miracles. He lifts his little finger to hold the Govarghan mountain bringing the entire folks and animals of Braj under his benign care .

As the brajwasis pray to Krishna Lord Indra gets offended and to punish them strikes thunderously and the whole of Braj is drowning in the rains, krishna says while you have to put in all your energies to bring this thunderstorm, my little finger can encounter your wrath and protect my bhaktas. In yet another eye opening leela maha Vishnu confirms his omnipresence in a pillar to prove the faith of his little Bhakt Prahlad.

This was the awe inspiring vision of Vishnu in the half man half lion avatar of Narasimha. Abhimanyu concluded his delineation of Sri Nath Ji by creating an atmosphere of Sankirtan raising the tempo to a crescendo making the audiences sway in complete devotion.