Despite dreary end, fest a success

The Bharat Rang Mahotsav featured the best in theatre with several interesting plays. 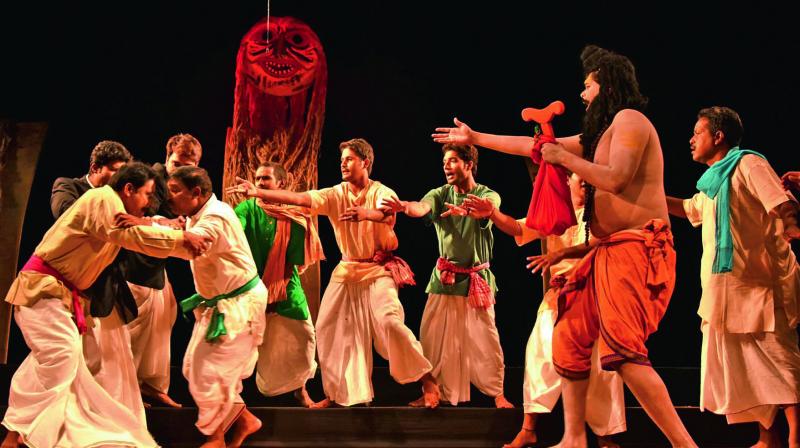 The international theatre festival of India — The Bharat Rang Mahotsav of the National School of Drama (NSD), concluded on a rather dreary note with Kolkata’s Calcutta Coire singing Sangeet Dhara. The festival was inaugurated featuring the best in Indian theatre on March 4 with a very interesting play, Lassanwala (Hindi and Khadi Boli), which put into perspective the Brahmin-Dalit divide.

The Manipuri playwright and director Heisnam Kanhailal’s Pebet was staged at the 19th NSD festival rather late in the day, as it was first seen some 30 years ago. Pebet is a type of small bird, which was once seen in Manipuri jungles but has not been seen for many years. To guard her broods, the mother distracts the predatory cat by flattering him. She continues to boost his ego until her children are ready to protect themselves. She resists the cat that captures the youngest in the group. Through a clever strategy, the mother manages to save her brood. Finally the pebets reunite as the cat leaves their lives. 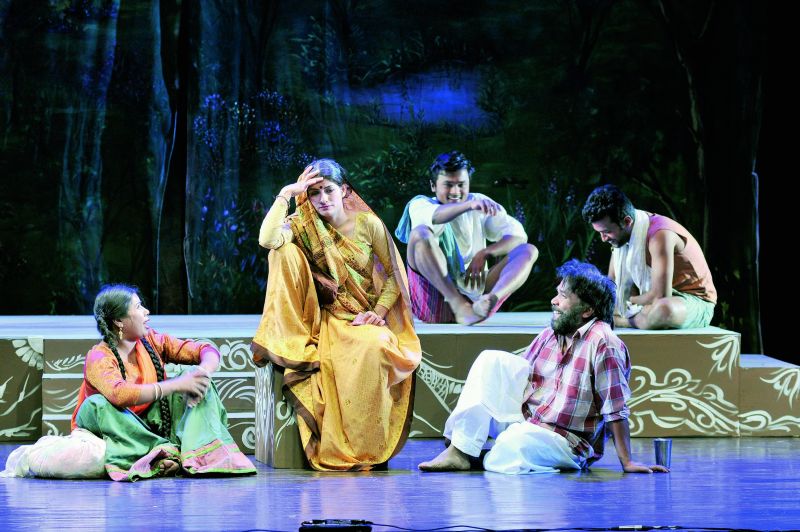 Pebet was one of the first plays in which Kanhailal attempted to reflect his ideology of theatre through form and content. His group is dedicated towards expressing the oppression and resistance that are part of day-to-day living in Manipur today.

Babaji in Odiya, directed by Dhira Mallick and written by Jagmohan Lala and presented by Satabdira Kalakar, Bhubaneshwar was a funny and satirical tale on the eternal theme that society should be wary of fake monks and blind beliefs. This was done through the life of a monk, who tries to create awareness about blind beliefs and evil deeds.

It was quite well done, with the Brahmins being played by pot-bellied men and the rest of the characters being played by ‘normal-looking’ people. Even the women who sang the songs were very attractive even as they fell for the tricks of the Babas. Make-up, costume and light were all efficient and pertinent. 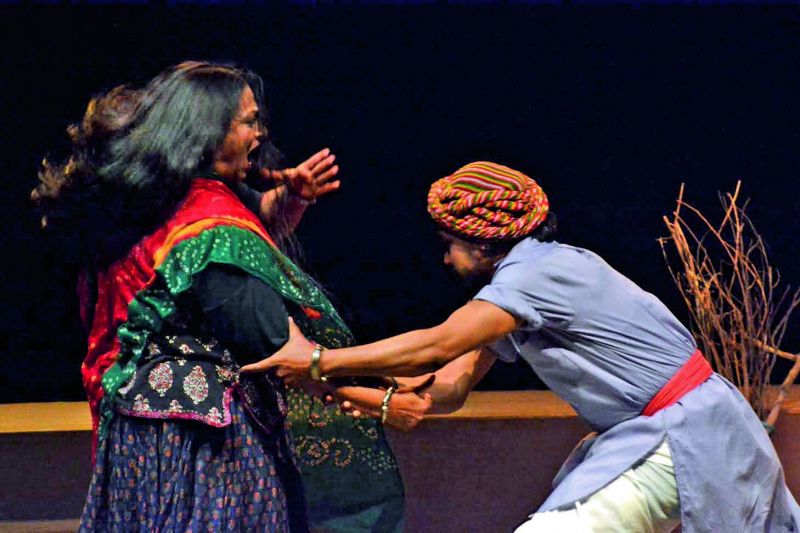 A stranger guest was created by Vera Bazark Schneider. The sound and lights were done by Asif Unger and Amihai Alharar. The lights were very good and were operated by Alexander Noham. It was written by Morriss Metralynk. It was an interesting play. Inspired by The Intruder, this family play places a father and his two daughters in a situation where they handle the prospect of the mother of the two girls being very ill.

From their dining room, the father and the daughters can see the ailing mother lying in her bed. The play is from Tel Aviv, Israel, and it speaks about the effect of a stranger in the house, which is felt by the father and the daughters. This was done with great sound and light effects. There is a sense of secrecy in the house with the girls whispering to each other and alienating the father during a game they play. The doctor has come and gone, saying that the mother is no longer that ill anymore. But the family does not believe him until they see the mother getting up and dancing around.

Gadal-Gunda by Rageya Raghav and Jai Shankar Prashad, was directed by Prem Matiyani, in Hindi. After the death of her husband, 45-year old Gadal leaves her family and moves in with 32-year old Mauni. The purpose is to teach a lesson to her brother-in-law Dodhi, who loves her very much but does not have the courage to accept her after the death of his brother. Gadal is a fearless woman who does exactly what she feels. Gadal was played well by Hema Singh and Suresh Sharma was good as Dodhi. It was an interesting play on the bravery of a woman who died in the end, her resistance to her weak brother-in-law and finally, the defiance of society while she lived with a younger man. 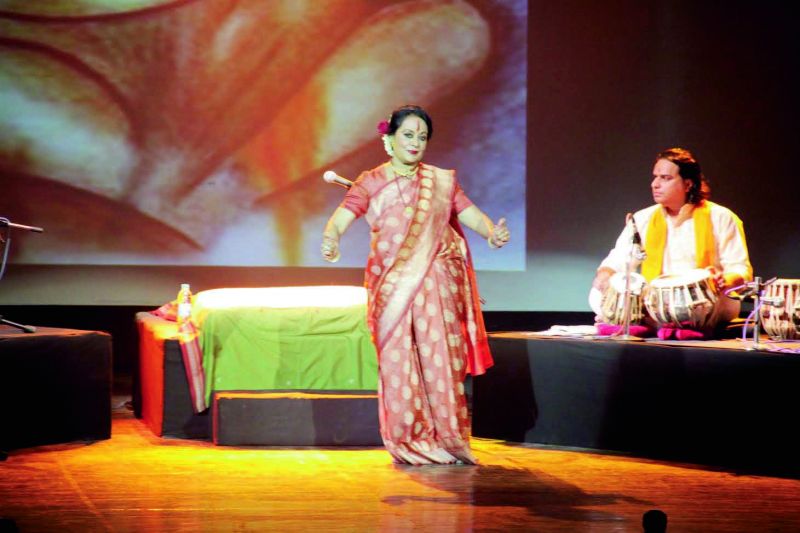 Nanhku Singh, played by Govind Pandey, is the lead of Gunda. The story is based in 18th century Varanasi, which is going through cultural and social turmoil under the dictatorship of then Governor-General of India, Warren Hastings. The protagonist Nanhku Singh tries to protect the human values, battling the situations and concomitant emotions. For instance, he is love with the queen but he tries not to see her.

Set design by Raman Das was very good for Gadal. As was the music by Akshay Nagar and Hemant Saikya and light design by Gopal Singh Yadav.

Akshayambara was written and directed by Sharanya Ramprakash. The play, developed through her INLAKS scholarship in 2014 and supported by the Indian Foundation for the Arts, IFA, premiered at the Rangashankara Theatre Festival in 2015. In this production we see a constant shift of power between the actors as they move from the green room to the stage and engage in a tussle that blurs the boundaries of stage and reality and male and female. Thereby, it explores the conflicts around tradition, gender, power and morality with the men donning streevesh (female characters) and the women playing purushavesha (male characters).

There was also Tamasha-E-Nautanki written by Mohan Joshi and directed by Sajida, an NSD graduate, the highlight of which was the music director Pandit Ramdayal Sharma.

A complex comedy, Welcome Zindagi examines the relationship between a Mumbai family — father, son and mother. Arun Kantra, played by Ramesh Manchanda, is on the verge of retirement as a clerk. His wife Bhanu, a simple but sensible woman, was played very well by Anju Jaitly. She also was a tongue-in-cheek sutradhar with a keen sense of humour.

The play was directed by Suresh Bharadwaj, who graduated from NSD in 1980 and is now the lighting professor at his alma mater.

There were a few dance dramas as well. Chitra was by Nrityaniketana Kodavoor and Udipi was directed by Dr Shripad Bhat. Chitrangada was presented by playwright and director, Ranjana Gauhar. Chitrangada was a neat and clean show in largely Odissi form.

The main text of this play was written by Rabindranath Tagore, to which Ranjana affixed the essence of a woman’s life beyond her external beauty: a woman of substance believes in her independence and freedom of expression.

Natya-Katha-Krishna was written and performed by Sonal Mansingh, who offered some of the most known and loved episodes from Krishna’s life.