All the concerts will start at 5.30 pm; thus giving the largely pedestrian audience ease of reaching home in good time. 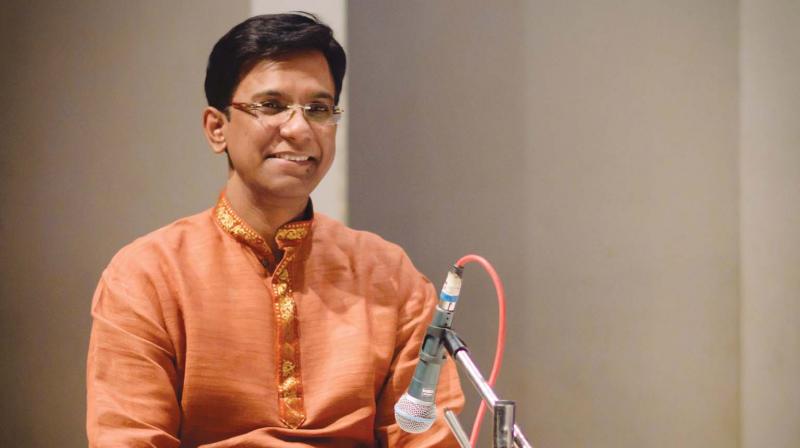 Durjoy Bhaumik at a performance

Shimla-ites are in for a musical treat from 9th to 11th August. As part of its ongoing series of concerts, in collaboration with the HP government, department of art language and culture, and with financial support from the North Zone Cultural Centre, Delhi-based Nadd Foundation will be presenting the 11th edition of its Concerts for Harmony series, at the iconic Gaiety Theatre in Shimla. Nadd Foundation, dedicated to spreading harmony through music, was set up in 2007, and is the brainchild of Durjay Bhaumik, a talented tabla player, disciple of “Taal Yogi” Padmashri Pt Suresh Talwalkar. This year, the Foundation plans to have festivals in Nainital, Mumbai Kolkata and Delhi. Durjay was enthusiastic about this, the second festival in Shimla; “I feel it’s very special to take our invaluable music tradition to the smaller towns in India too. Audiences are less exposed to classical music, but thirst for it. Live concerts have their own attraction, and I feel it’s important as an organiser, and artist myself to create opportunities for audiences.”

The festival opens on August 9 with a vocal recital by the Kolkata-based, extremely talented Indrani Mukherjee. Equally adept in “khayal” and “thumri” “gayaki”, Indrani has learnt from several gurus from different gharanas, including Pt Ajay Bhaduri, late Vidushi Purnima Chaudhury, late Pt Ram Ashrey Jha and has absorbed nuances of their different gharanas. Her powerful voice, totally in her control is a delight; her successful exposure at concerts in the US, Europe, Canada, and the West Asia have given her the additional perspective of performing in front of very diverse audiences.

The next day will again feature a vocal khayal recital by Pt Shounak Abhisheki from Pune, who is the son and disciple of the iconic vocalist Pt Jitendra Abhisheki (incidentally also one the gurus of Padmashri Smt Shubha Mudgal, who performed in Shimla last in 2016 at the Annual Shimla Music Festival). Pt Jitendra Abhisheki was an erudite musician’s musician and also a great composer; it will be interesting to hear his son perform some of his compositions.

The concluding day of the festival, August 11, will feature two artistes — a tabla solo by Durjay Bhaumik, followed by a vocal recital by Dr Alankar Singh. Durjay is an innovative performer, combining “taalim” with “riyaaz”, and an eagerly sought after accompanist as well as being a seasoned soloist.

The only Sangeet Natak Akademi Yuva awardee for Shabad kirtan, Dr Alankar is fully trained in the classical idiom, Gwalior and Rampur Sahaswan gharana. Currently a professor of music in Patiala, Dr Alankar Singh last performed classical music in Shimla in 1999 at the Kalibari Music Festival, and was looking forward to this opportunity to present the rare compositions from the Guru Granth Sahib, each of which is in a prescribed raga. All 9 Sikh Gurus were musicians, and used music as a means of connecting with the divine one. There are nearly 1,500 verses in the Guru Granth Sahib, and each verse is set in raga. This remarkable fact shows the Guru’s deep connection with the ragas, and their knowledge of which mood was created by which raga, so they stipulated which verse was to be sung in which appropriate raga.

Truly, the careful curation by the organisers, ensuring that artistes from the East West and North perform; also that there are different styles of singing, (the different gharanas) and different genres — thumri ghayal and Gurbani; merit special praise.

All the concerts will start at 5.30 pm; thus giving the largely pedestrian audience ease of reaching home in good time.