The question and answer session that followed the discussion was extremely lively. 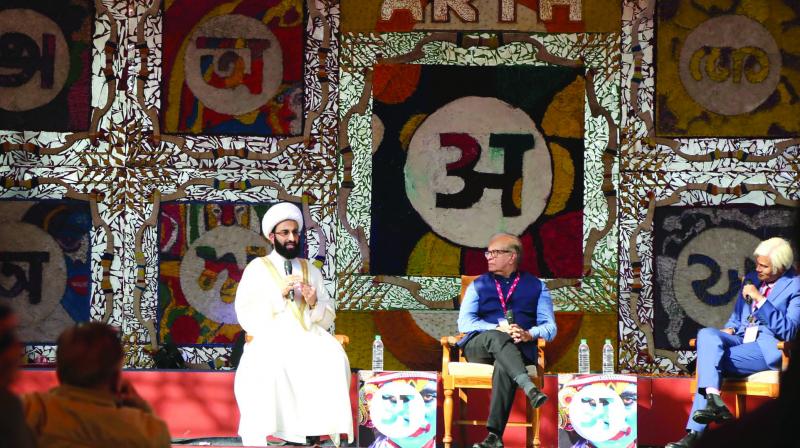 One of the most interesting sessions was by Iran-born, Australia-based cleric Imam Tawahidi (“Imam of Peace”) in conversation with an America-based author on Hinduism, Rajeev Malhotra.

Grandly entitled a festival “celebrating Indian art, music, culture, history, traditions, literature: Indic knowledge and society”, the recently concluded three-day festival, Arth, at IGNCA organised by the Zee group stood out for its largely youthful audience. Out in large numbers, there was enormous student participation which was not intimidated by the subjects discussed or the eminence of the panelists.

Held in two concurrent venues outdoors, with about 12 sessions a day, the festival ambitiously engaged on several fronts, and was curated by the historian Vikram Sampath from Bangalore. He said, “There is a lot of jingoism today, but actually a lot of us don’t even know what it is one is proud of as an Indian. Our hashtag is #rediscover_your_roots. So we are talking of sciences like ayurveda, vedic maths, metallurgy, astronomy as well as philosophy, the arts, etc. There are four festivals every year, and this year they are in Kolkata, Pune and somewhere in the south, and the national one is this, in Delhi.”

Whilst one heard Arnab Goswami holding forth on India and its problems, there were also scholarly discussions by academicians of the stature of professor Gautam Desiraju, professor Krishnamurthy Ramasubramanium and professor David Frawley. There were special workshops of painting, pottery, block printing and weaving, and sessions for children too. Speciality cuisine had been sourced from the different regions of India, making it possible to stay through the day.

One of the most interesting sessions was by Iran-born, Australia-based cleric Imam Tawahidi (“Imam of Peace”) in conversation with an America-based author on Hinduism, Rajeev Malhotra. The session was moderated by NY Hunter College philosophy professor and author, Vishwa Adhuri. On the subject of Muslims having to eat beef as per the Quran, the Imam said definitely not. Controversially, he felt the majority in a country should have a say in the decision making of religion-based eating — if Islamic countries dictated on pork intake, Indians should have the right to dictate on beef intake, in spite of India being a secular country. He felt Hinduism had a lot to offer to the world and was misunderstood generally speaking, by Muslims. The question and answer session that followed the discussion was extremely lively. Vishwa Adhuri said the “interaction on social media was like an echo chamber; live discussions were vital in this context.”

Predictably the discussion on Bhakti and the arts concluded that in India the two are inextricably linked and the arts cannot exist without Bhakti. Veteran Bharatanatyam dancer and Sangeet Natak awardee Lakshmi Vishwanathan opined that “bhakti is the most profound aspect of Indian life; deep devotion is undivided shringara”. She quoted Tyagaraja as saying “singing without bhakti is a song without wisdom and beauty”. Bharatanatyam dancer, bureaucrat and Padma and SNA awardee, Ananda Shankar Jayant, another panellist, took the discussion into a more practical direction, and introduced in the discussion the concept of the trivialisation of the arts today. Everyone knows the importance of the arts and in maintaining the traditions but they are not considered career options. This should change, she said. Arts should be a part of our schools, and patrons are required. SNA chairman, musician and dramatist, Shekhar Sen, was his usual fluid and eloquent self; he is a great communicator. “How the link between Bhakti and the arts is so intertwined can be seen from every temple having a kutumbashala or rangshala or area for performances”, he said. He made his points with telling analogies that struck an instant chord with the youthful audience. (He called temples power banks of energy, which were being constantly charged by artists who performed there).

The musical element at the festival was equally prominent — there were several concerts. The qawwals from Ajmer Sharif in Rajasthan created magic singing quawallis composed by Amir Khusrau, in the traditional full-throated style. The fervour created by the relentless rhythm interspersed with invocatory lyrics had the listening audience transported. Pt. Vishwamohan Bhatt jammed with the Manganiyars from Rajasthan headed by recent Sangeet Natak Akademi awardee, Anwar Khan, merging the classical and folk traditions seamlessly.

Bombay Jayashri’s concert entitled Love and Divinity took one on a musical journey linked with the sublime, from the 9th century to the 18th century, singing in turn compositions of Periyalvar, Andal, Jaideva, Basavanna, Meera, Shama Shastry (Raga Thodi) and Tyagaraja. The concluding composition in Sanskrit by Muthuswamy Dikshitar, entitled Jambupathe, an invocation to Lord Shiva in his form as water left one in total awe; the magnificent lyrics matching the grandeur of the notes. In the words of Bombay Jayashri, “there can be no better way of ending this concert than by thinking of the divine as formless and omnipresent.” Aditi Mishra, a civil services aspirant from Indore who was hearing a live Carnatic concert for the first time confessed that “this was the finest introduction I could have had to Carnatic music.”

It was of course physically impossible to catch all the discussions, or even get a gist of each session, but Arth inarguably stimulated all the senses and intellect and one hopes is taken all over India, not just four cities.