Time to reclassify Chhau as classical?

What seemed a straightforward way of explaining a few basics of this traditional performing art genre sparked a fair amount of excitement. 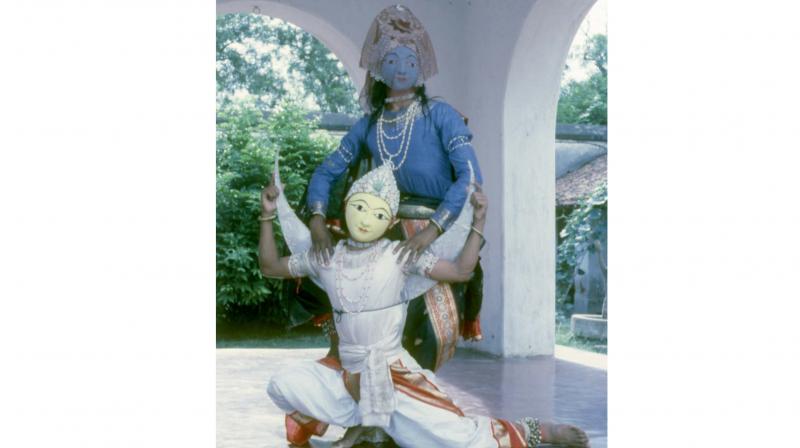 Chhau dance is in the doldrums. The art and artists have been increasing starved by mismanagement of government funds and perhaps also because this sophisticated martial arts-based dance genre is languishing in the twilight zone of inclusion with folk forms.

A red light went off for me last year when Sunil Dubey, a talented Seraikella Chhau musician and protégé of Anup Jalotra called me from the Surajkund Mela in anguish. “Guruma, the dancers in heavy brocade Benaras silk costumes and masks have to perform all day repeatedly in the sun and then stay in a vast dormitory for tribal artists eating food we can’t digest.”  Till then I had felt that the sometimes arbitrary dichotomy of traditional Indian performing arts forms separated into folk and classical categories did not need encouragement. I had perhaps naively felt that the arts had an intrinsic value.

Why were these others not acknowledged when India became a new nation? Simply a process which has been written about earlier of individuals making the effort bring to light the high level of codified technique in a given form that correlates to Natya Shastra. Doing this is an engineering project that includes translating names of positions and movements into Sanskrit from local languages so that Shastric correlation is made clear.

A couple of decades ago, I gave a presentation on Seraikella Chhau as part of an international Padatik conference in Kolkata. Though my primary Chhau training from 1975 was with the legendary Mayurbhanj Chhau guru, Krishna Chandra Naik, I trained in Seraikella Chhau from 1981 under Guru Kedarnath Sahoo. Winner of the coveted Sangeet Natak Akademi award, Padma Shri Gopal Prasad Dubey became my Odissi student at that time, and he also became my Chhau collaborator in several productions as well as this conference presentation.

The core of the presentation involved simply showing how the martial arts Paika movements transformed into dance when the British forbade zamindari private armies and the movement techniques added music, symbolic gestures and expression of story. This uses the whole body as in Manipuri without emphasising hands and face over torso and lower limbs. Then I deconstructed one choreography, demonstrated by Gopal, by naming each moving point with its Sanskrit equivalent rather than the Odia.

What seemed a straightforward way of explaining a few basics of this traditional performing art genre sparked a fair amount of excitement. Scholars like Suresh Awasti and others wanted my notes, which I never re-wrote and shared. I heard there was a buzz for some years that classical recognition was a distinct possibility but, as stated earlier, I saw no need to encourage the process.

Since that time, efforts by dedicated artist-scholars have transitioned other traditional dance forms to classical status and I see results of Chhau being left out. The nuanced and sophisticated performances are fading into less refined versions. New choreography within the tradition has had zero support from central, state or private patrons draining off talent to enrich contemporary choreography with the rich vocabularies of Chhau as this frankly pays the bills for the artists to survive.

I have seen the excellent training of Mayurbhanj Chhau Guru Janme Joy Saibabu, son of Sangeet Natak Akademi awardee Guru Anant Charan Saibabu, but fear his legacy will be diluted and lost as few disciples realise the solid gold training he can impart and his well-trained sons have little incentive to grow as artists within the tradition as all the opportunities and validation comes through fusion work. His disciple from Colombia, Carolina Prada is one of the finest exponents and she alone cannot sustain the continuity of tradition.

There are many reasons that have impeded a move to recognise the cousin-brother of Odissi as classical, ranging from the classic people politics of “crabs keeping others down in an open box” coupled with successful stranglehold on access to available resources from cultural bodies like ICCR, SNA and Dept of Culture by Delhi based artists. I have no objection at all to their getting support for their work but feel the pain of dancers in Seraikella and Mayurbhanj districts who are denied virtually all sustenance aimed to reach them which is killing the art in favor of one artist.

More than obstructive reasons, pro-active efforts by cultural leaders who are recognised by those in Delhi have hampered the path to classical recognition. The work of great scholars like late Tori-babu in Baripada on Mayurbhanj Chhau has never been published and numerous other articles and papers on the subject see the light of day only in limited print editions of Chhau souvenirs and other small publications, never reaching the eyes of bureaucrats or the Delhi cultural bodies that respond the dedicated efforts of others who press them convincingly over time.

The justifications for Mayurbhanj and Seraikella Chhau to be recognised as classical are many and it is not the scope of this article to spell these out. My intention is simply to start the discussion that needs to be carried forward by strong supporters as had been done in the past, from Vallathol’s advocacy for Kathakali (one of the several great dance genres of Kerala), Rukmini Devi’s passion for reconstructing Sadir Natyam into Bharatanatyam, Tagore’s bringing Manipuri to Santiniketan and national visibility to the more recent efforts of Assamese dancer-scholars to reinterpret the Sattriya dance of monks formatted to successfully join the pantheon of Indian classical dances. The last Maharaja of Mayurbhanj, after Indepe-ndence and the loss of his privy purse that allowed him to support and manage the art of Chhau performed under his total patronage, banned the artists from performing in future as he did not wish to see this beautiful art deteriorate. Each dance composition was re-choreographed for the annual competition during Chaitra Parva by the competing Dakina and Uttar Sahi troupes. Today, we see pale copies of one remembered version of some of these. Validation of this intangible cultural heritage of India as classical could go a long way to reviving an exhausted yet uniquely wonderful dance tradition.

Sharon Lowen is a respected exponent of Odissi, Manipuri and Mayurbhanj and Seraikella Chau whose four-decade career in India was preceded by 17 years of modern dance and ballet in the US and an MA in dance from the University of Michigan. She can be  contacted  sharonlowen.workshop@gmail.com.