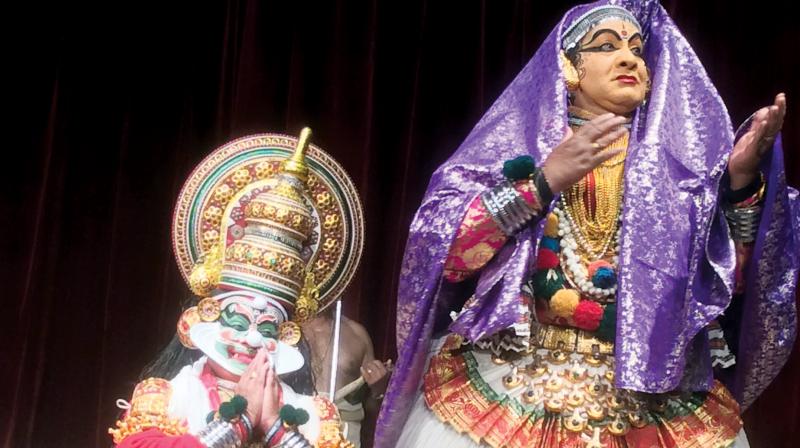 Ravana in Kathakali has the green face of nobility but this is tempered by the white ball on his nose signifying the character flaws of an asura (demon).

Ravana in love, portrayed in the nuanced highly sophisticated abhinaya expression of Kathakali is a unique aesthetic treat that I recently experienced at IIM Bangalore.

I have seen occasional Kathakali performances over the past half century, from Kerala Kalamandalam in the USA as a teenager to all night performances in Kerala; Kathakali student presentations, workshops, lecture-demonstrations and performances of traditional and modern stories from Ramayana to Othello, but I have never before seen Ravana in love!

The heroes or nayakas we see in classical dance are almost always Krishna or Ram or Murugan, basically uttama, refined characters.

Ravana in Kathakali has the green face of nobility, but this is tempered by the white ball on his nose signifying the character flaws of an asura, not to mention the visible fangs and the wonderful guttural vocalisations only the bad guys are allowed to express.

Abducting Sita has nothing to do with love and is primarily about power. Whether in Kathakali or other classical dance forms, neighbourhood Ramlilas or the majestic month long Ramnagar variety, we generally meet Ravana in the final chapters of his life and, of course, his interest in humiliating Ram by stealing Sita is far removed from love or romance.

In Kuchipudi, I recall a classic composition about Mandodari, Ravana’s beautiful frog princess queen who was one of Indrani Rahman’s favourite items.  There is also the memorable traditional Kuchipudi performance of Gurus M.V. Narasimhachari and Vasanthalakshmi, which has the flavour of romantic Hindi film romp in a park.

Other than this, I had not seen the kind of developed exposition of Ravana’s sringar as can be portrayed through Kathakali and neither have any friends I have asked so far. The performance I saw drew on the episode of Ravana and the Apsara Rambha from the Uttara Kanda, the seventh and last book of what we call the Valmiki’s Ramayana.

This serves as an epilogue and explains many questions raised during the main action.  For instance, whether Ravana waited for Sita’s consent before touching her was because an unwilling conquest was beneath his dignity as a great king or because of a curse is answered here.

The performance of this attakatha, dance story form of Malayalam literature, began with Ravana, superbly enacted by Kalamandalam Sri Kumar, reaching the Mount Kailash with the intention of conquering the demigods.

His half-brother, Kuber, sends a messenger to initiate reconciliation. Kalamandalam Parthasarthy gave a brief but impressive performance as the duta. However, Ravana’s response was to decapitate him.

Soon after, the celestial Apsara Rambha crosses his path and Ravana is overwhelmed with love at her exquisite beauty and grace. When Ravana’s feelings for Rambha are shown, we see a sensuality and desire elegantly conveyed through a character closer to human than that of a god-hero.

Ravana asks, “Who is there superior to me that you are on your way to meet? Accept me as your husband and remain with me, for it would be a waste of your incomparable beauty to have it enjoyed by anyone else.”

Rambha, expertly played by Margi Vijayan, tries to put him off by making it clear that she should be considered as his daughter-in-law as she is en route to meet Nalakuvara, the son of Kuber, his brother. Appealing to his send of righteousness naturally makes Ravana laugh.

Ravana scorns Rambha’s appeal by saying, “Your argument only applies to women with one husband. Since the Apsaras have no actual husbands, I do not have to consider you in the light of such morality.” Here is a core model of the modern asura attitude of still too many men (including politicians and judges) that, if a woman has ever been physically intimate with any man, then she has abrogated all rights over her body and “no” means nothing.

In fact, even according to mythology, Ravana was wrong.  An apsara’s fidelity to her lover-husband is sacred, irrespective of time limitations of a day or a lifetime. Each day an apsara is returned to a state of purity and can take another husband of her choice.

Fortunately for Sita and countless other women, Ravana’s rape of Rambha was not justifiable because she was an apsara and so her husband, Nalakuvara pronounced a binding curse, “Ravana’s head will split into seven parts if he ever again tries to forcibly enjoy a woman against her will”

This Kathakali performance was the culmination of a roundtable discussion on sustainable creativity at IIM Bangalore, the brainchild of A. Damodaran, the distinguished IIM professor whose father was responsible for building the stages for both Kalakshetra and Kerala Kalamandalam and establishing the Margi institution for Kathakali.

Since all live performances are a synergy of audience and performers, being seated between fellow panellists Adoor Gopalakrishnan and Sanjana Kapoor enriched the experience with Adoor-ji’s depth of knowledge of Kathakali and Sanjana’s clear-eyed connections to the present day scenario.

While we all wish Ravana’s punishment for raping Ramba could be served on all who follow his asura ways, it was a never to be forgotten aesthetic experience of a unique sringar bhava interpretation.

Sharon Lowen is a respected  exponent of Odissi, Manipuri and Mayurbhanj and Seraikella Chau whose four-decade career in India was preceded by 17 years of modern dance and ballet in the US and an MA in dance from the University of Michigan. She can be contacted at sharonlowen.workshop@gmail.com.