Usha, an art consultant has with complete devotion, contributed immensely in promotion and propagation of classical arts for over three decades. 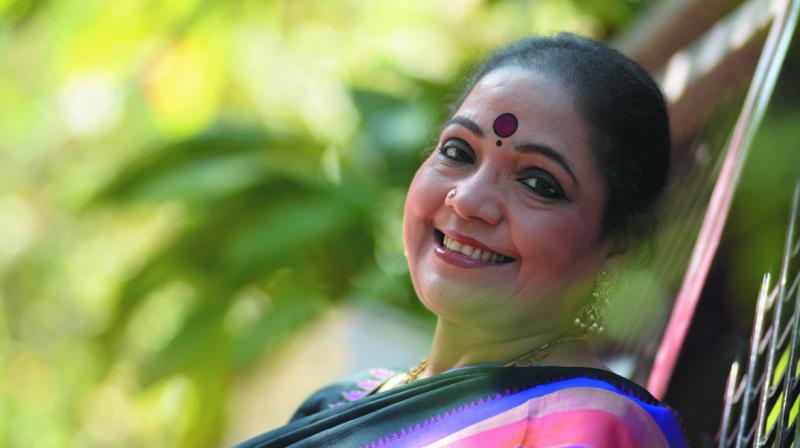 For any country, dancers are like the precious gems, each taking values and traditions to yet another new level. We have many fantastic dancers in India, who have dedicated their entire life to dance and have become icons of India’s dance scene. So who all are these Ratnas of dance? To answer this complicated question I met renowned art consultant Usha RK.

For Usha, dance became her companion during her schooling. Training under the gurus of Raja Rajeshwari Bharata Natya Kala Mandir, C.R. Acharya and Vempati Chinna Satyam, Usha chose to take up research and academic aspects of dance that enabled her to develop her dance writing skills. A pioneer in the arts organising sphere, Usha has carved a niche for herself as an impresario of formidable calibre and competence.

Conceptualising and creating some of the pathbreaking dance and music festivals, Usha was indeed lucky to work with many of the legends in the music, dance and film worlds. Whether it was thematic festivals like “Swarna Sankhya” or the grand music festival “Raga Tala” or the “Nritya Dhara” celebration of International Dance day featuring over 175 dancers — all her endeavors have been hugely successful.

Interesting thematic dance programs like Thyagaraja Vaibhavam, Margam — a festival of Varnams, Rama Katha, Diksha — based on the compositions of Muthuswamy Dikshitar, Padams & Javalis and the recent Divya Trilogy have attained exceptional success. Her complete dedication to promote and propagate the arts is significant and noteworthy.

Usha, an art consultant has with complete devotion, contributed immensely in promotion and propagation of classical arts for over three decades. Her interesting thematic presentations have been widely appreciated and gained exceptional success. Her deep understanding and training in two dance styles, Bharatnatyam and Kuchipudi with her love for music has led her to research in various aspects of composers and compositions in Carnatic music.

This octogenarian has held on to the heritage and purity of Bharatanatyam invincibly.

Vedantam Satyanarayana Sharma (Kuchipudi)
A pioneer in transformation into an extremely beautiful Satyabhama from a simple Telugu Brahmin villager from Kuchipudi took India by storm when he entered the national stage. Vedantam Satyanarayana Sharma’s mannerisms, costumes, characterisation, makeup, jewellery — all contributed in creating a mesmeric Satyabhama. We are yet to find a replacement for him. His portrayal of the feminine characters was enhanced by his innate sense of emotional expression, highlighting every moment whether it is hasya or karuna.

Birju Maharaj (Kathak)
Lightening like footwork, the ultimate control in making a single ghungroo ring and creating a cascading melodious effect through his feet interlacing expressions, which could make a young maiden almost shy, are the highlights that made my heart swoon while experiencing the dance of Birju Maharaj, said Usha. The simplicity with which he communicated the most inexplicable Indian philosophy, portraying the naughtiness of a child hero, the enlivening of the heart beat through his shringar rasa and the soul stirring yearning for the lord through the rendering of Bhajans makes him the most respected exponent of our times.

Sonal Mansingh ( Odissi)
An iconic personality of India, Sonal Mansingh is without any doubt an exemplary master of cultural interpretations delineating inter-linkages with philosophy literature mythology, sculpture and dance. Odissi has reached heights and attained the status of being a highly intellectual form due to her contribution. When dance and expression are combined with intellect, knowledge and spirituality, the result is — Sonal Mansingh.

Bharati Shivaji (Mohiniyattam)
The credit of taking this dance form to the global stage goes to Bharati Shivaji. Creating a widespread interest for this niche form of Mohiniyattam ensconced in the villages of Kerala, Bharati’s efforts in this area are noteworthy. Taking literature and poetry from various languages, she has extended the Mohiniyattam repertoire in a very composite manner.

Jhaveri Sisters (Naina, Ranjana, Suvarna and Darshana Jhaveri), Manipuri
These four sisters brought traditional Manipuri dance to the cities. If one wants to understand the meaning ‘subtility’, witness the dance of the Jhaveri sisters. Their soft nature complemented the lasya aspect with bringing out an underplayed tandava aspect of the Manipuri style. Their beautiful and colourful performances demonstrate the subtle body movements and rhythmic peculiarities of the Manipuri dance.

Sadanam Balakrishnan (Kathakali)
Sadanam Balakrishnan, an exemplary artist merged into the role of an artistic director with an absolute ease. Sadanam used the art grammar form seen in traditional performances to bring alive on stage some classic international plays for Indian audiences. His ability to look into the varied aspect of production music composing, lyric writhing costume designing and choreography had made him the only kathakali exponent who dwells into ‘Communication through tradition’. Kathakali today has seen newer and interesting shades through the eyes of Sadanam Balakrishnan.

Yamini Krishnamurthy (Kuchipudi)
Was it a matter of genes or prodigal inheritance or a sheer in born genius — one could never tell. She emoted like very few could. Her energy, strength and sponge like memory, grace and an aggressiveness that struck the audiences like an Astra that demolished one completely. Yamini Krishnamurthy is kuchipudi and kuchipudi is Yamini Krishnamurthy. She romanced, argued, fought, loved, beseeched and prayed to every deity through her dance. Dance gives her an opportunity to communicate and Yamini took the opportunity by the horns performing with authenticity and convincing credibility retaining the stamp of kuchipudi loud and clear.

Chitra Visweswaran  (Bharatanatyam)
Bringing in calculative precision like style, beautiful lyricallity and melody was the contribution of Chitra Vishveshwaran. It is probably the spiritual approach in communicating even simplest concepts of Indian philosophy that transformed Chitra’s successful performances. Her visualisation and choreography changed the style of presenting the Bhakti aspect in dance. At the same time, her interpretations of the varied emotions, while dealing with shringara, were close to real experiences. She encouraged modern compositions of traditional items in the traditional format to extend the Bharatanatyam repertoire.

Sandip Soparrkar is a wellknown Ballroom dancer, a World Book of Records holder and Bollywood choreographer, who has been honoured with National Achievement Award and National Excellence Award. He can be contacted on sandipsoparrkar06@gmail.com