A solo exhibition that captures diverse and complex human emotions on canvas. 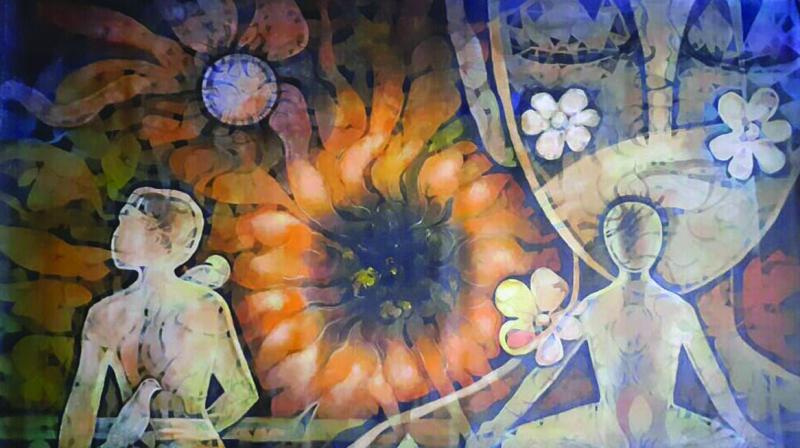 The peculiar aspect of human beings is the diverse and complex emotions they possess at all times. Art captures just that as it captures every emotion — irrespective of the complexity of the emotion and the human being.

An exhibition titled Realms of peace was recently organised at the Visual Art Gallery where Bhaskar Singha exhibited his works which are based on the human emotions of joy, the trials and tribulations of life and euphoria through the acrylic, oil and watercolours on canvas incorporating the layer on layer technique to create a transparent effect giving air a surreal appearance.

So what does ‘Realms of peace’ mean? In simple words, realms of peace is an area, space or kingdom where dreams rule the religion, life and there is no entrance of politics, it’s beyond the imagination, which creates connections.

The artist went through phases in his artistic journey where he experimented with techniques, colour, design and compositions and visual language across genres. He adds, “I realised that all those years I sought were for simple stories, truths and simple joys. I hope my paintings will form that simple emotional connect with you.”

He is regarded for his style of using transparent colours, which he calls ‘ the wind technique’ as he attempts to create abstract emotions. “I worked on this technique for over two decades and now it flows naturally from my hands. I try to associate air with different human emotions. For example, in the mood of joy, the air flows smoothly, and if the subject on the canvas is angry, the air turns gusty,” explains the artist.

The canvas he uses is soft, gossamer-like imagery and his paintings are related to the power, emotions and feelings but the air becomes the main element, which he uses in his painting.

One painting, which the artist highlights from the exhibition, is named Sreeram and says, “Like Sri Ram struggles a lot to save his family and rest other good people and used to make wise decisions, similarly now everyone is going thought it. They are all fighting to make their family feel proud.”