Bengal terracotta — in clay but not ephemeral

Most of the exquisite terracotta temples for which town is justly famous were built during this period. 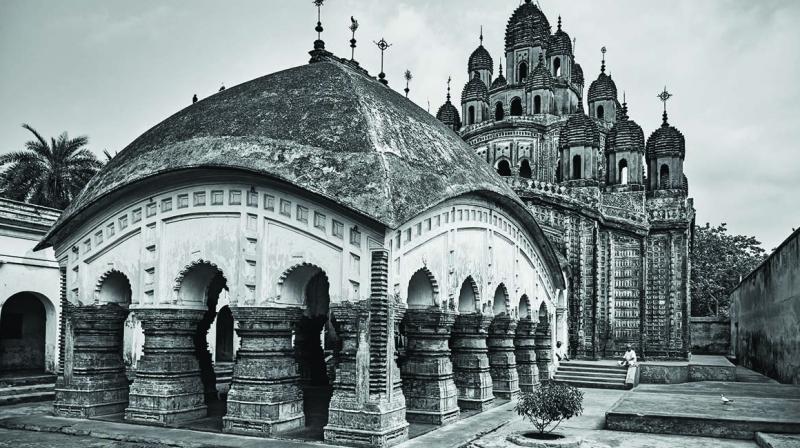 The Malla rulers were Vaishn-avites and built the famous terracotta temples during the 17th and 18th century in Bishnupur, West Bengal

Since 1997, the temples of Bishnupur are on the Unesco World Heritage Site’s tentative list. The saris too turned out to be the flesh and blood of the temples — for just like the temples the sarees too are based on themes from the Ramayan and the Mahabharat.

Many years ago I was attending an art camp in Shantiniketan. The-re was much to occupy us at the camp with a large number of artist friends painting together and doing adda simultaneously, it was a special time. We groaned under the copious amounts of machher jhol and mishit doi that we imbibed on languid afternoons in the homes of artists who lived there and insisted on entertaining us. The artist town was literally in bloom as it was spring and the lawns in every home smiled as did the and carefully tended pots of flowers.

On one such afternoon conversation turned to places of interest in and around Shanti-niketan and when someone uttered the name Bishnupur, I immediately perked up for that meant the Mecca of the great Baluchuri sarees. Very deviously I turned the conversation around to a sightseeing trip to the great terracotta temples of Bishnupur. Having got enough number of artists to agree into undertaking the day trip, I cleverly wove the saree trip in it too! Off we went piled into two or three cars complete with sandwiches and beer.

The trip turned out to be unforgettable. The terracotta temples took  our breath away with their intricacy and fine detailing, the way the clay was baked complete with the black smoky parts intact were simply overwhelming and awe-inspiring. Since 1997, the temples of Bishnupur are on the Unesco World Heritage Site’s Tentative list. The sarees too turned out to be the flesh and blood of the temples — for just like the temples the sarees too are based on themes from the Ramayan and the Mahabharat. I still have an outstanding Swarnachari saree depicting the Krishna and Meera theme from that trip. 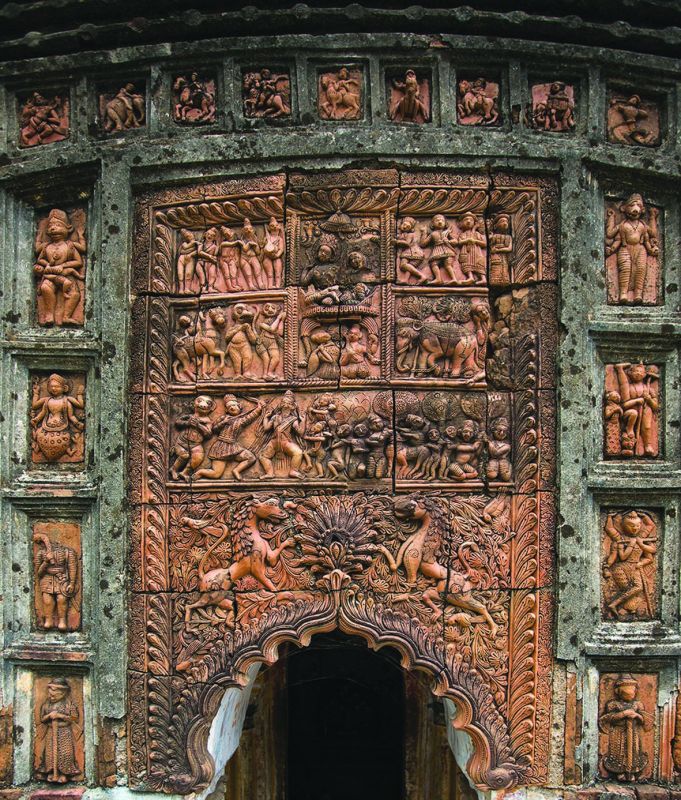 Recently when one of my most favourite photographers Sanjay Das shared with me what he had been shooting in rural Bengal — the fabulous terracotta temples of the Bishnupur region — it brought back all those wonderful memories and the whiff of the time spent there.

While travelling through Bengal, he discovered these monumental terracotta gems, which stand in oblivion with no focus and garner almost zero curiosity from common people. These temples with their amazing craftsmanship of terracotta panels, are still burning bright despite the gargantuan negligence caused by man and nature. “These structures were an eye opener for me and marked the beginning of an intriguing journey and another interesting story” says Sanjay as he exhibits some of these images in his show Monumental Terracotta. 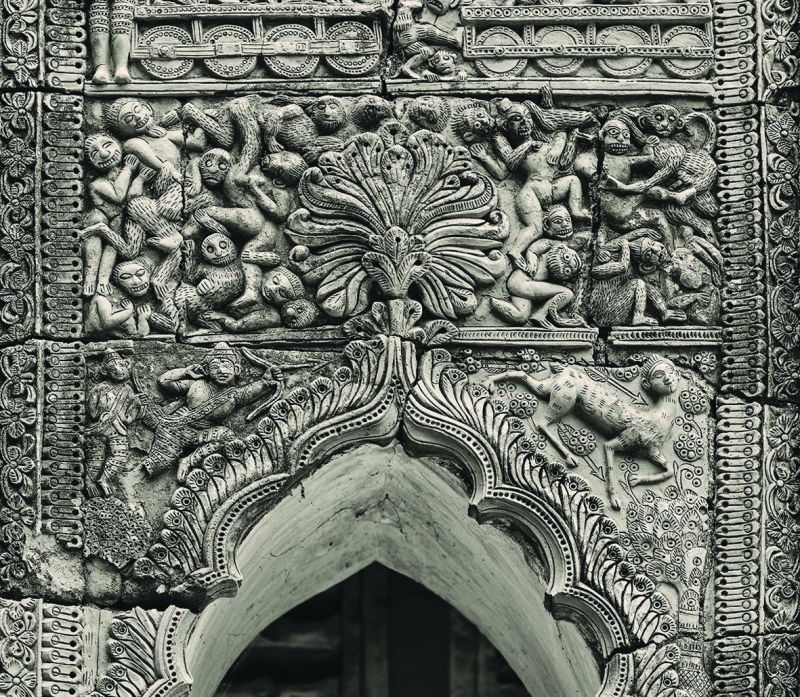 Historically speaking Bishnupur in Bankura district was ruled under the Gupta period by local Hindu kings who paid tribute to Samudra Gupt, following a long period of obscurity, where the land oscillated between being a minor independent principality and a vassal state. The land is also called Mallabhum after the Malla rulers of this place. The Malla rulers were Vaishnavites and built the famous terracotta temples during the 17th and 18th century here. The legends of Bipod-tarini Devi are associated with Malla Kings of Bishnupur. The patronage of Malla king Veer Hambir and his successors Raja Raghunath Singha Dev and Bir Singha Dev made Bishnupur one of the principal centres of culture in Bengal.

Most of the exquisite terracotta temples for which town is justly famous were built during this period. It continues to be a seat of crafts and culture with its most visible symbol of the Bankura horse made in terracotta. And of course the Bishnupur school of painting and Hindustani classical music.

“I am working on storytelling for the past two decades. My journey is often off the beaten track to explore some interesting and unknown dimensions. The objective is to create imagery that tells a story — in texture, in light and shadow and to form a unique blend, which is spiritually as well as mentally rewarding” says the photographer. 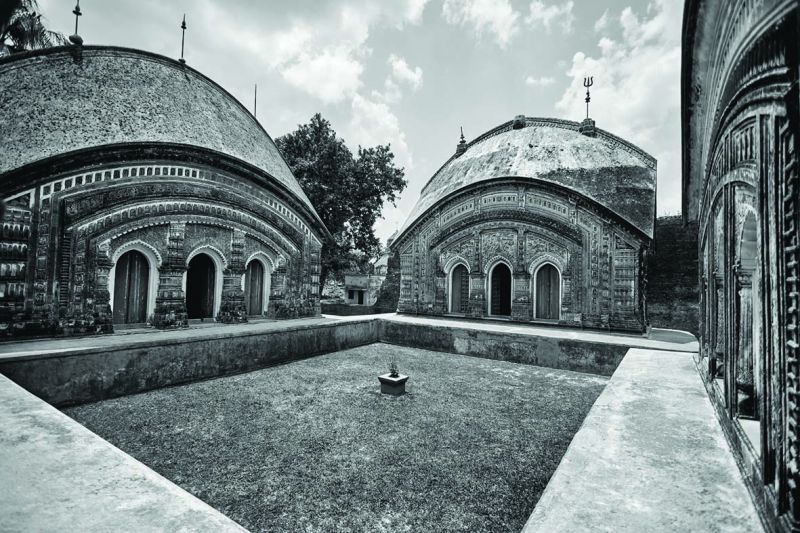 From the mid-15th Century, the art of baked soil took its finest shape on the walls of West Bengal temples. The terracotta temples of Bengal were mainly built during a 3 period when the region was witnessing a revival of Hinduism with particular focus on the cult of Krishna. This was after prolonged exposure to Islam. As a result, temples built during the sixteenth century and later, absorbed the monumental style of the traditional Muslim building forms and techniques. The temples can be classified into mainly the “Chala”, “Rat-na” and “Dalaan” styles. The first has the curved “Bangla” roof and the curved cornice. The second is characterised by the towers, while the “Dalaan” has the flat roof. The vitality of the temples is not restricted to the architectural forms. The temple walls are covered with moulded baked clay panels.

The early temples continued with the foliage and geometric designs of the 14th and 15th century mosques and tombs of Bengal. By the 17th century there evolved a rich iconography with religious and secular themes. Favourites were the epic battles of the Mahabharata, the Ramayana, and of Cha-ndi with the demons.

The life of Krishna was another favourite. Secular themes included the warriors, hunters, musicians, tradesman, birds, animals, and day to day life scenes. “In a span of seven years during the time I was doing my survey and research on Bengal, I have been witness to the changes that these temples are undergoing. Within a short span these temples will be reduced to dust, and with that we will kill a piece of our historical glory, laments Sanjay.