Visual artist Radhika Surana uses her monochrome charcoal drawings and pencil sketches to draw a parallel between music and art. 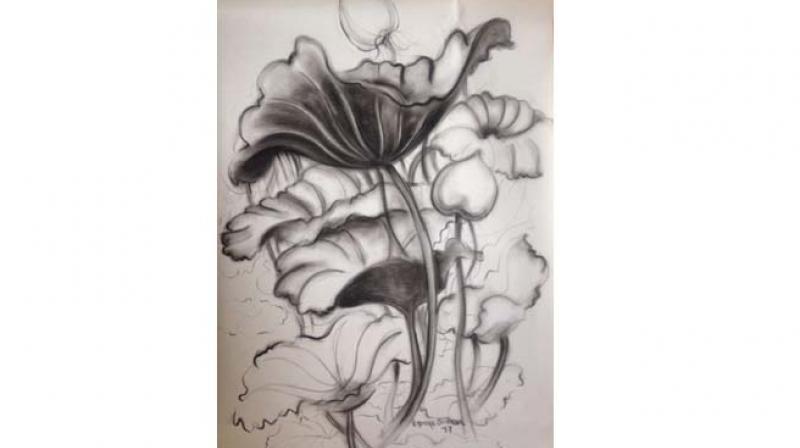 One of the interesting aspects of the exhibition are the lotuses inspired by Surana’s visit to Thailand.

Creating a lyrical synergy between music and art, Radhika Surana, a Delhi-based classical singer and visual artist will be presenting a solo show of charcoal drawings and pencil sketches titled, Search for Rhythm at the Triveni Gallery. The innate simplicity and flowing, singular lines embodied in the artwork draw a parallel between music and visual art. “As a practicing artist who is also a Hindustani classical vocalist, the idea of rhythm helps me draw parallels between these two forms of art. The flow of line on a sheet of white paper resembles the flow of notes in music. The use of texture and tonality in the drawing is similar to that of modulation of the voice while singing notes in music,” says  Surana, who believes that the idea of rhythm is inherent in the two forms of art.

“In music, this rhythm is apparent. The translation of this rhythm into lines creates an expression personally for me. Both line drawings and music are simply extensions of my search for rhythm. Whenever I sit to draw, it is like I am drawing for the first time and I feel the excitement of discovering this rhythm all over again,” shares 49-year-old artist. 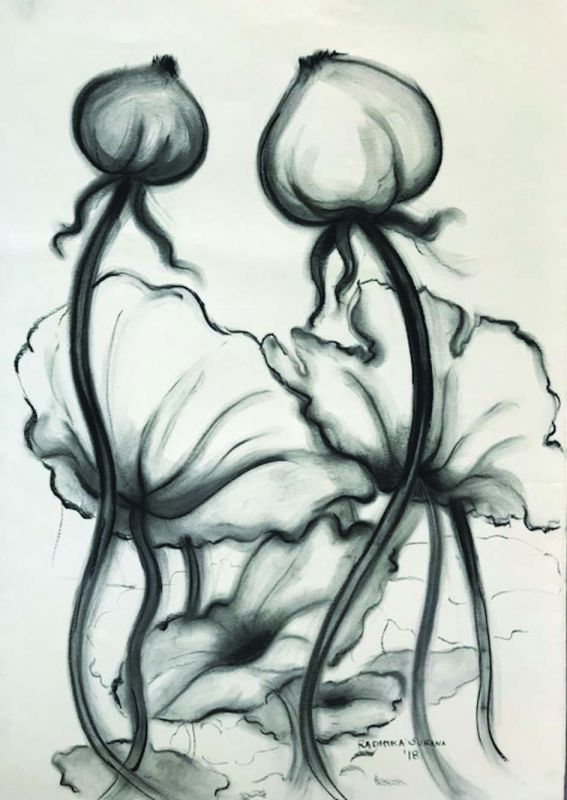 The show includes six imperial size charcoal drawings of lotuses and around ten clusters of three to four sketches each. Since the work is based on rhythm, the charcoal sketches have been titled on the basic concepts of rhythm in Hindustani classical music, for instance there is Sam – the beginning of the rhythmic cycle, Laya’ – the rhythm, Bol – the words of the rhythm among others.

One of the interesting aspects of the exhibition are the lotuses inspired by Surana’s visit to Thailand. “I first saw them dancing in a swampy pond, in Krabi, Thailand. Just seeing them gay and the hidden rhythm in the leaves and the buds had me itching to sketch them. Later the thought of exaggerating their rhythm and lining them with my music made it more fun.” 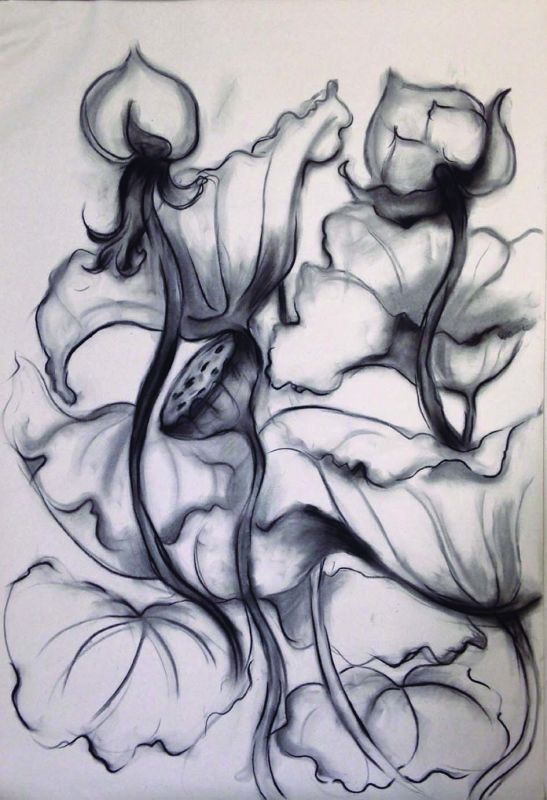 Her fascination with their simple outlines can be seen in a series on cows. “To represent them in just one flow of line, to maintain the pressure of the pencil and to get the shape is a challenge,” says Surana. Then there are works depicting leaves and flowers, all inspired by Surana’s inclination towards the rhythm of flowing musical notes.

Talking about what triggered the whole idea of bringing music and art together, she shares, “For me a normal day means at least four hours of riyaaz and four hours of painting. Later I realised that there was a lot of overlap between the two; both had the same elements of harmony, balance, and rhythm. There was a common strand running deep them and that is how this idea came up. Thus, it was a perfect way to bring the two aspects of my creativity together on a single canvas,” says Surana, whose paintings are deeply influenced by the bandhishs (compositions) on different ragas. 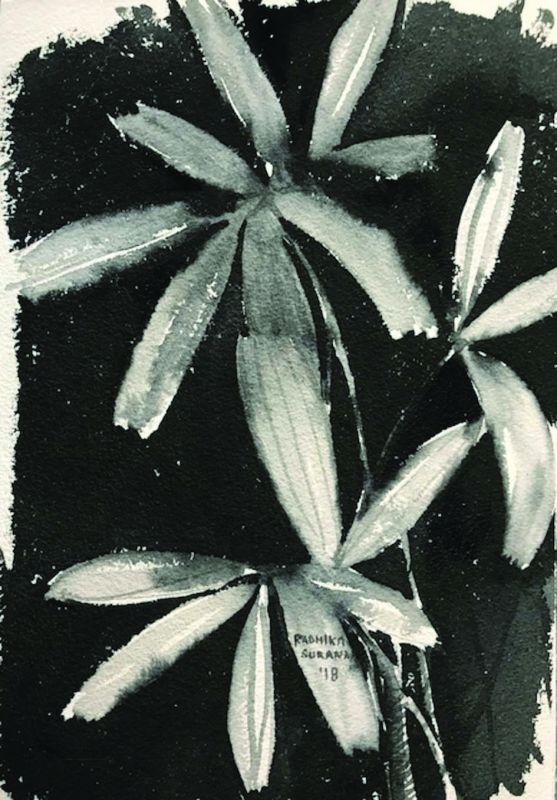 For Surana, art has never been a compulsion, rather it was her growing interest that prompted her to take up fine arts in both school and college. “Art was always something that I wanted to do. Infact, art classes were the most enjoyable part of my academic,” she  Surana, a graduate with a Bachelor’s in Fine Arts from Rajasthan University. Simultaneously, she worked as an apprentice for Dwarka Prasad Sharma, a prominent artist of Jaipur. “Training under him in the guru shishya parampara was a very enriching experience. And I was able to strengthen my grasp on the use of colour, form, and composition.” 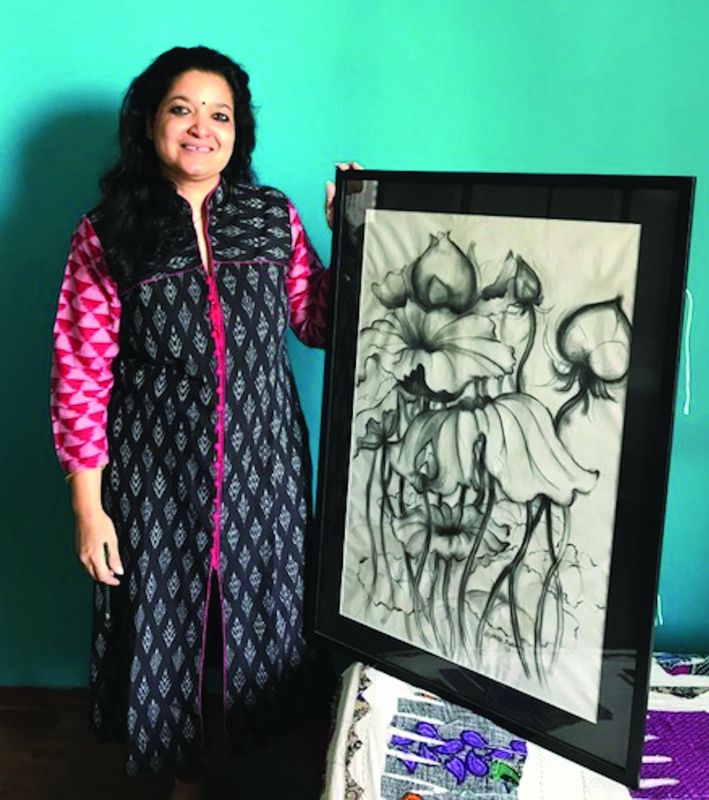 The themes for her paintings have mostly centered around nature, divine deities and music. “Most of my work has been in transparent watercolour and acrylics. I prefer these mediums because of their expressiveness. But then, I felt the need to display the power of the simple line on paper. The deeper I am going into music and painting, the more I want to simplify my work. The rhythm that I feel in music, I am now attempting to translate it into my art through the use of line. Sketching is like riyaaz for me,” says Surana, who finds it challenging to display within one swift movement of the line the intensity and the feel of the subject. “It’s a constant process of trying and failing and trying again,” she says.